After impeachment, Trump wins again — unless Democrats can tell a better story

Democrats are finally asserting themselves. But without a compelling narrative, they'll never take down Trump 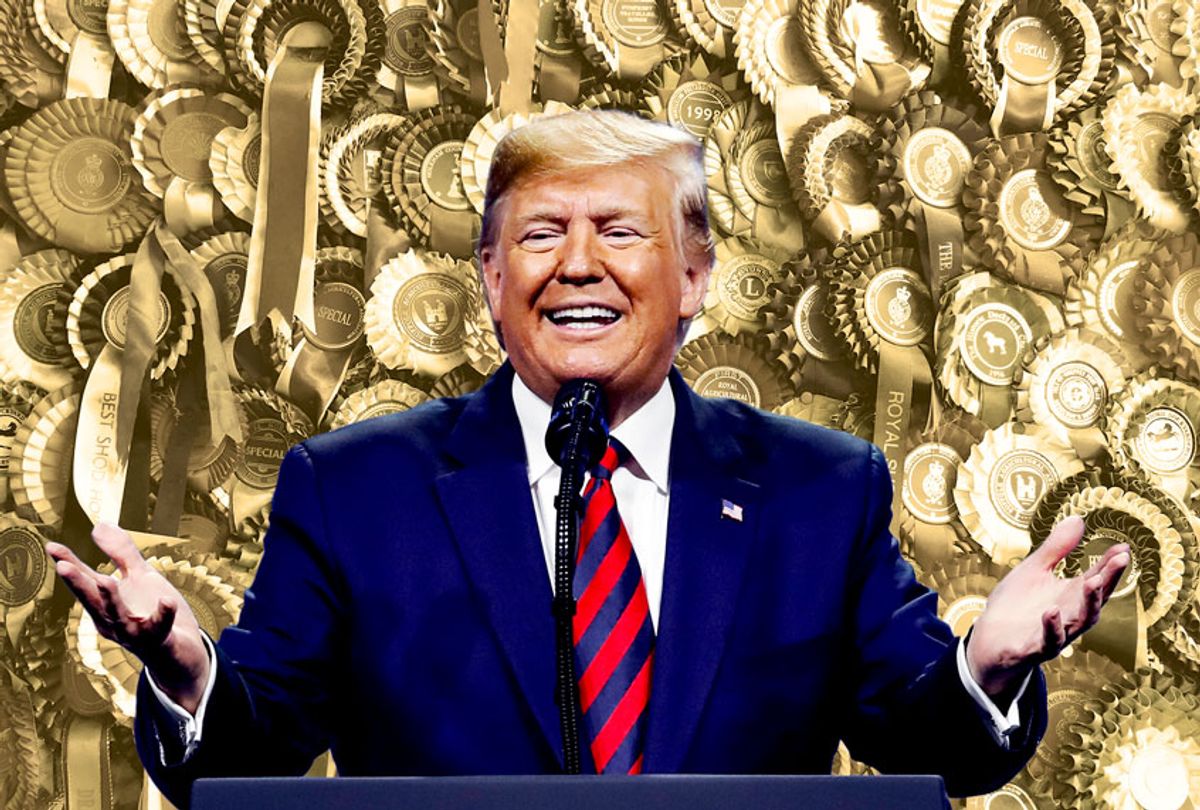 Donald Trump and just so much winning. Just. So much. (Getty Images/Salon)
--

With the goal of protecting American democracy, the Democratic Party has (finally) decided to impeach our lawless, and profligate president.

On Tuesday, House Democrats released articles of impeachment against Donald Trump. Those are being marked up in the Judiciary Committee and should reach the House floor on Friday.

After a two month-long investigation, the Democrats have charged Trump with obstructing Congress and abusing power, as related to the Ukraine scandal and Trump’s ongoing efforts to encourage foreign interference in the 2020 presidential election.

President Trump abused the power of his office, undermined our national security and jeopardized the next election. He has shown no remorse and is at it still, trying even now to get foreign help in his re-election. No one is above the law. Donald J. Trump must be impeached.

House Speaker Nancy Pelosi said that Donald Trump must be impeached because he is a would-be “president-king.” Pelosi warned that not impeaching Donald Trump would risk the end of American democracy.

But in reality as it actually exists, Democrats’ efforts to impeach and convict Donald Trump somewhat resemble Trump's fantasy of dropping nuclear bombs in a hurricane. It is a dramatic show that ultimately amounts to very little. The hurricane remains largely undisturbed.

The Republicans in the Senate are more loyal to Donald Trump than they are to the Constitution and democracy. There is almost no possibility that Trump will be convicted and removed from office.

President Trump will probably be re-elected in 2020. Based on his repeated threats, there is a high probability that Trump will not leave office even if he is somehow defeated in 2020.

Donald Trump will not be stopped by impeachment. He may not even be slowed down.

As shown by public opinion polls and other data, many Americans have already made up their minds about impeaching Donald Trump, largely along party lines. Other Americans have little interest in political matters in general, or in Trump's crimes and the impeachment process in particular. Overall interest in impeaching Trump seems to be diminishing. Political deviance has become normalized. This is one more step on a not-too-long march toward full-on fascism in America.

There are other reasons why Donald Trump will not be stopped by impeachment and will likely be re-elected in 2020.

It is true that a new Quinnipiac University national public opinion poll shows Trump being defeated by any of the leading Democratic candidates. But America is not a direct democracy. As with Hillary Clinton in 2016, the Democratic Party's eventual nominee may well defeat Trump by (many) millions of votes. Trump can still win the Electoral College.

Trump commands a political cult that offers unwavering support. He controls a right-wing propaganda machine — anchored by Fox News — which dictates the thoughts and feelings of its public. Dissent against the Great Leader and American emperor-king is not allowed.

Ridiculous and untrue conspiracy theories have created an alternate reality for conservatives who support Donald Trump. Ignorance and the worst form of epistemological nihilism function as gravity in TrumpWorld.

According to the Republican public affairs firm Firehouse Strategies, Trump holds a significant lead over Joe Biden, Bernie Sanders, and Elizabeth Warren in key battleground states such as Pennsylvania, Wisconsin and Michigan. Those results may not be objective, but they are surely worrisome.

As a recent CNN report observed:

The latest economic numbers — 266,000 jobs created in November, unemployment at a 50-year low — make one thing very clear: President Donald Trump has a path to win a second term next year.

Yes, you can quibble about whether the strong November report or the upward revisions in job gains for the last two months or the broader upswing in the economy is due to Trump and his policies. But what we know — both from our political history and more recent polling — is that presidents get credit when the economy is strong and blame when it is weak. ... It's very, very hard to beat an incumbent president unless the economy is seen by a majority of the public to be weakening badly.

In small but politically significant ways, the economy under President Trump has favored regions and constituencies that supported him in 2016. These are the men and women whom Trump called forgotten Americans.

The emerging pattern of economic growth reverses a trend that held from the 2008 recession to 2016, in which Democratic-leaning states and counties far outpaced Republican-leaning sections of the country.

Now, under a Republican administration, job growth rates in Trump country are rising faster than they are in Democratic America. As the national unemployment rate hovers at just below 4 percent, far more red states than blue states are setting records for low levels of joblessness.

Edsall cites Alex Brill, a resident fellow at the American Enterprise Institute, whose research "found that 10 states — many of them with large rural populations — broke records in 2019 by hitting their lowest unemployment rates in history: Alabama, Iowa, Kentucky, Mississippi, North Dakota, Pennsylvania, South Carolina, Tennessee, Vermont and Wisconsin. Of those states, all except Vermont were won by Trump in 2016.

In all of these states — and in virtually every state Trump carried — white men who had not graduated from college (polling shorthand for the "white working class") were a crucial constituency driving Trump’s victories.

On the website of the Economic Policy Institute, a liberal think tank, there is a detailed compilation of hourly wage levels by race, ethnicity and gender. It shows that among workers with no more than high school degrees, white men saw their inflation-adjusted hourly wages rise from $21.22 in 2016 to $21.88 in 2018. Sixty-six cents an hour isn't much of a raise. But in an era of wage stagnation, it is something."

Trump and the Republican Party’s mastery of “sadopolitics” have ensured many such people's loyalty through a perverse feedback loop of pleasure and pain. One example of this dynamic is Donald Trump’s welfare program for white farmers. CNN’s Katie Lobosco explains:

China's tariffs immediately wiped out what was once their biggest export market, worth $12 billion in 2017. That was more than a year ago. Soybeans have since piled up in bins, sending the amount in storage up 108% in 12 months. The price per bushel has fallen to a 10-year low.

The situation looks bleak, and tariffs have hit other crops like corn and wheat, too. Many farmers have expressed frustration, and some have even said they no longer support the President. But farmers, a politically important group for Trump, are staying afloat — largely thanks to Trump's bailout — and that's keeping some on board with Trump's trade war. ...

Pennsylvania farmer Bill Boyd said he supported Trump's trade war originally, when he thought it would be wrapped up in a few months. But now that it's dragged on, he thinks it was a "bad idea."

"I think he's backstabbing the main people who got him into office in all those Midwest states who help to vote him in," Boyd said, but added that it's likely he will vote for Trump again.

"Unless they (Democrats) come up with a better alternative, I am going to vote for him again," he said.

Ultimately, for all of the high-minded talk (and idealistic hopes) about how American voters should make political decisions based on their values, and perhaps on material concerns about the economy and the future of the country, political outcomes in a (failing) democracy are more likely to be a function of emotion and narrative.

In that sense, regardless of whether one sees him as a superhero or a supervillain, Donald Trump holds a commanding advantage over the Democrats.

Trump demands and commands attention. One either loves him or hates him. He is a profoundly polarizing political figure.

To this point in the 2020 campaign, the Democrats have no true star performer. Even if Bernie Sanders and Elizabeth Warren occasionally reach those heights they have not used their charisma to command America's imagination.

Writing at the Guardian, David Smith works through this problem for the Democrats and what it means for the 2020 presidential election:

Too old. Too young. Too white. Too leftwing. Anxiety over Democrats’ failure to find a standout candidate is raising fears that, despite astounding unpopularity and potential impeachment, Donald Trump could win re-election by default.

Watching it all with glee are Trump and Republicans, hardly able to believe their luck that they might not have to win next year’s election so much as watch Democrats lose it, just as Hillary Clinton did by failing to motivate turnout in crucial states in 2016. This week’s debate in Atlanta showed that the party is struggling again to find a nominee as inspiring as Barack Obama. ...

John Zogby, a Democratic pollster, said: “In most polls nationwide and in the key states, the president is competitive against every one of the major candidates. The Democrats are still kind of fumbling for a message: it’s really not enough to be against Trump. ... Trump could very well win this, not only because he did the first time in an unconventional way, but because voters are very clear they want something worthwhile voting for against Trump; otherwise key groups will not show up to vote in sufficient numbers.”

Two weeks ago Donald Trump was widely mocked for tweeting an image of himself as Rocky Balboa, Sylvester Stallone's character from the beloved "Rocky" films. Trump and his supporters have shared many such images. He has been depicted riding an Abrams main battle tank and shooting machine guns while American eagles fly overhead as his heralds. Trump has even been depicted as a god or demigod.

Trump's campaign also apparently believes that he is Thanos, the "Mad Titan" of the Marvel Comics universe, who commits genocide by killing half of all living things in the universe as shown in the blockbuster "Avengers" films.

Trump is also a favorite subject of right-wing propaganda artist Jon McNaughton, who has painted the president riding a motorcycle, cradling the American flag, using superpowers to stop nonwhite migrants and refugees at the U.S.-Mexico border, and as a tough guy wannabe thug.

As psychiatrist Dr. Lance Dodes told me several weeks ago during an interview for Salon, Trump may actually believe he is a god.

Those not in Trump’s political cult mock and deride such fabulist, absurd and implausible depictions of a 73-year-old man who is clearly in questionable health.

But Trump’s critics are not his intended audience.

How has the Democratic Party’s likeliest presidential nominee, Joe Biden, fought back against Trump’s narrative? Biden continues to default to a weak narrative of forging compromise and  “consensus” with the Republican Party, which of course helped to birth the monstrosity of Trumpism. For the most part, Biden and the Democratic Party’s storytelling is dreadfully uninspired.

To make matters even worse (and more comical) Biden is now touring Iowa in a bus emblazoned with the slogan “No Malarkey.”

Who wins in a contest between Trump’s Abrams main battle tank and Biden’s "No Malarkey" bus? The outcome is obvious. It is a pathetic, albeit entertaining, mismatch out of a monster truck rally.

Unless the Democratic Party uses impeachment as a launching point for a compelling vision of how to best rebuild America for the average American, Trump will win re-election in 2020. Trump’s failed impeachment will likely be the wind at his back as he lies about how he and his supporters have become victims of a “coup” and “conspiracy” by the “treasonous” Democrats.

To borrow from Paul Heyman, an executive director and professional wrestling manager for World Wrestling Entertainment, “This is not a prediction. It's a spoiler.”