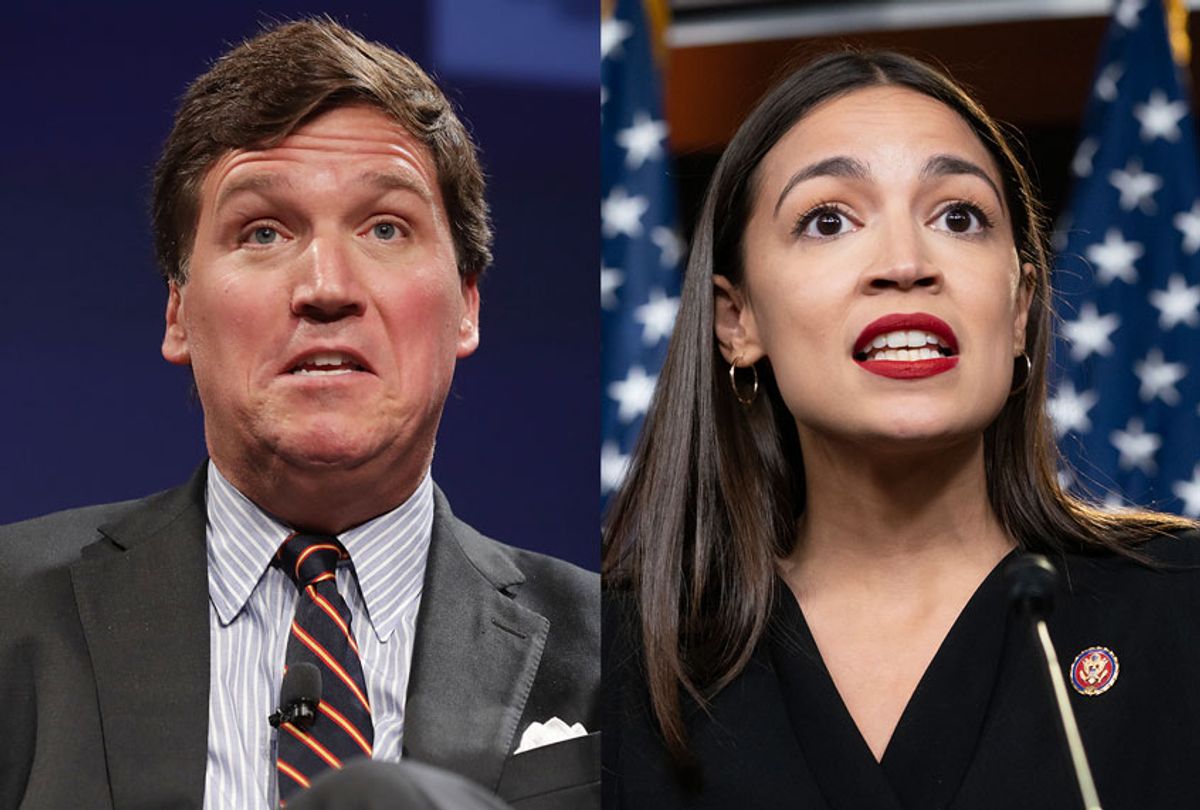 Rep. Alexandria Ocasio-Cortez, D-N.Y., called Tucker Carlson a “white supremacist sympathizer” Wednesday on Twitter, adding that Fox News’ decision to “bankroll” him was the “main reason” why she refuses to appear on the network.

“I go back and forth on whether to go on Fox News,” Ocasio-Cortez tweeted. “The main reason I haven’t is squaring the fact that the ad revenue from it bankrolls a white supremacist sympathizer to broadcast an hour-long production of unmitigated racism, without any accountability whatsoever.”

Ocasio-Cortez’s tweet included a link to a segment in which Carlson and a guest, conservative writer and editor Seth Barron, showed footage of garbage littering the ground of Ocasio-Cortez’s district and argued that this was because not enough people there were “American citizens.”

“We’re connoisseurs of irony on this show, but if you claim to care about the environment, you’d think that the little piece of America you’re responsible for — that you represent in the Congress — would be clean but hers isn’t. Why?” Carlson asked as he showed clips of garbage in streets and other public places within Ocasio-Cortez’s district.

“Well, part of the reason is because her district is actually one of the least American districts in the country,” Barron responded. “And by that, I don’t mean that it’s not part of America. But it’s occupied by relatively few American citizens. A very high percentage of her district is, in fact, illegal aliens.”

He added, “Now, the way they inhabit housing there is such that they live in a lot of illegal spaces like basements, and many people live there, so they wind up producing a lot of garbage that the landlords don’t want thrown out normally, so hence you wind up with a lot of garbage on the streets. You have illegal food vendors pouring their pig grease into the gutters.”

In August, Carlson called white supremacy a “hoax” in the aftermath of the El Paso massacre, in which an armed man who targeted Latino immigrants in Texas killed 22 people and wounded dozens more.

“It’s actually not a real problem in America,” Carlson said on his Fox News program. “This is a hoax, just like the Russia hoax. It’s a conspiracy theory used to divide the country and keep a hold on power.”

An outspoken democratic socialist, Ocasio-Cortez has emerged as a popular target for criticism among conservatives. In an interview with Salon in January, Carlson explained why he dislikes democratic socialism and why he believes it would never work.

“My problem with democratic socialism — I have two problems. One, show me where it's worked that would make me feel better," he said. "And I'm not talking utterly homogeneous countries with populations of six million people, but real countries. I'm not aware of any place that it has worked, OK?”