After Michael Symon learned that dairy triggered his inflammation and joint pain, he figured out a new way to eat 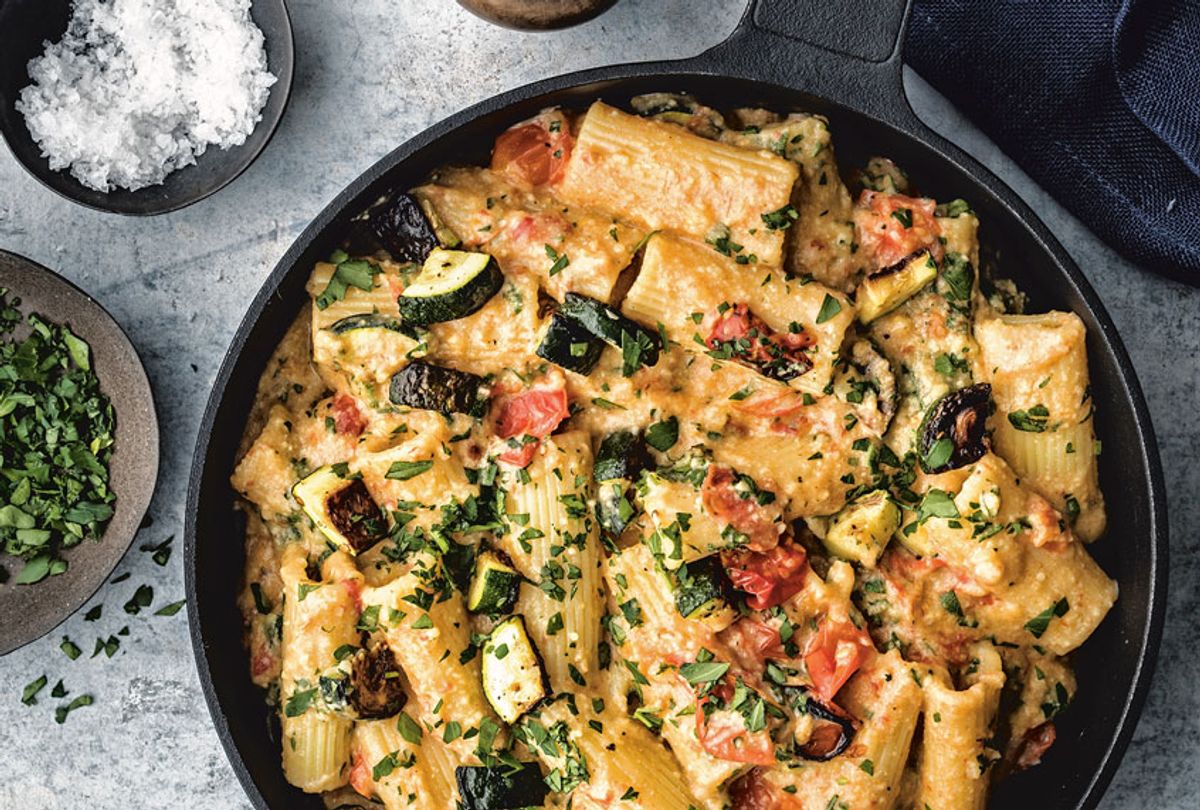 As one of the preeminent chefs in America, James Beard Award winner Michael Symon needs no introduction. You know him from the Food Network as an Iron Chef and the host of "Burgers, Brew & 'Que." Before that, he was the co-host of the long-running ABC talk show "The Chew." A prolific author, his sixth cookbook hit shelves this week.

Fix It With Food is no ordinary cookbook. Like Playing With Fire, his last collection of recipes, it was not born out of one of his award winning restaurants. Like his 5 in 5 series, it was not about how he gets food on the table quickly for his family. A former wrestler who was later diagnosed with external lupus and rheumatoid arthritis (RA), Symon writes that he "resigned to the fact that pain (and pain pills) would be a regular part of my life."

Unsatisfied with that answer, Symon eventually turned to his diet for answers, and he found out that dairy was one of us biggest triggers. After making simple adjustments to his eating habits, he no longer self-medicates.

When he recently stopped by Salon's studios in New York, Symon shared how he developed a recipe for mac and cheese that actually has no cheese at all. The recipe was born out of his love for his family. Below is the story, in his own words:

"Our son Kyle is 32, and the original Lola, our first restaurant, opened 23 years ago. It had a mac and cheese with roasted chicken — a fresh rosemary local goat cheese and cream that you would kind of simmer all together and then toss. And he literally grew up on the dish. He didn't know what goat cheese was when he was a kid, so he just ate it.

"And then when he got into high school, he came in for dinner one night to order it off the menu. And he was like, 'Oh, I don't want this. It's got goat cheese in it now.' I'm like, 'It's the same cheese you've been eating since you've been a little kid. Be quiet!' And we actually put the goat cheese in it back then, because he didn't do well with cow's milk. So we put goat cheese in it for him, and it turned into a restaurant dish.

"With this one — the dairy-less one — we're doing it with cashew milk in the book. But you make a roux with olive oil as opposed to butter, and we use regular flour but made sure it was flour that wasn't bleached, enriched or bromated. If you're gluten free, you could do it with rice flour. And so, that's the roux that thickens it — equal parts of both. Then you put in your cashew milk to get it going, and you get this beautiful, creamy sauce. Oat milk would work great, too.

"And then I did it with roasted tomatoes and zucchini that you could toss in with the pasta, and then we finished it with — and this is one of (my wife) Liz's old vegetarian vegan tricks — she would make what she called 'parmesan,' which I used to make fun of her for. But it tastes really good, so I can't make fun of her anymore. She takes cashews, yeast, and garlic, and buzzes it up until it was the consistency of parmesan. And it has this kind of real kind of nice saltiness to it that 'parm has, and it gives you a little bit of that umami blast.

"So we sprinkle some of that on top, and even hardcore mac and cheese lovers are very satisfied with the richness and the creaminess. And it still has decadence to it, even though you've eliminated all the dairy. And, really, that's what the book's supposed to do. It's like —  there's not a recipe in this book that you'll eat and you'll say, 'I miss something.'"

2. Add 3 tablespoons of salt to a large pot of water and bring to a boil over high heat. Add the pasta and cook until just al dente, about 1 minute less than the package directions. Drain and set aside.

3. In a large bowl, toss together the zucchini, tomatoes, and 2 tablespoons of the olive oil. Season with a pinch of salt and a twist of black pepper. Arrange in a single layer on a sheet pan and roast in the hot oven until the vegetables are nicely charred, about 10 minutes. Set the sheet pan aside.

4. Place a large heavy-bottomed skillet over medium heat. Add the remaining 4 tablespoons olive oil and heat to shimmering, then add the garlic. Cook until aromatic, about 2 minutes. Add the flour and whisk to combine until a sandy mixture forms, about 1 minute. Slowly add the cashew milk while whisking until the mixture is smooth. Cook until the sauce comes to a simmer and thickens, whisking the entire time, about 5 minutes.