Andrew Yang and neurodiversity: Tribute from an Aspie

Yang probably won't be president. But his positive rhetoric on neurodiversity has been a breakthrough for autism 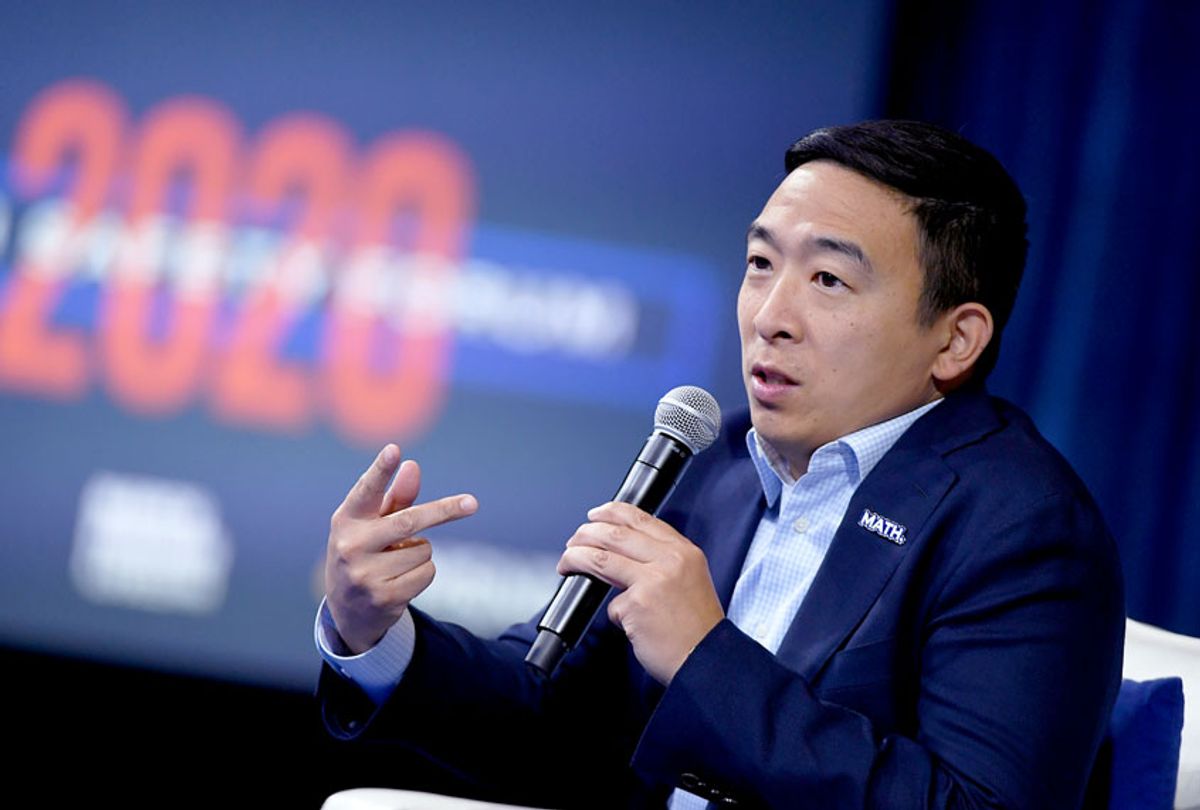 This article is not an endorsement of Andrew Yang's presidential campaign. It is, however, a full-throated endorsement of the compassionate, far-sighted way Yang has approached issues involving the autistic community.

I don't say this merely because Yang's policies would be exactly what the autism community needs — although they are. In August he tweeted that "as a parent of a child with autism I know that we need to do much more for families and individuals. I would be proud to make this happen as President. Neurological diversity is the new normal."

On Yang's website he has expanded on this, writing, "One of my boys is on the autism spectrum — I know how invaluable resources and intervention can be, particularly if adopted early on. Families struggle with this in very personal ways." He later added, "These children have something unique to offer."

His proposals include "direct[ing] the Department of Education to support states (with information and funding) in implementing programs to identify and treat autistic children" and a campaign to destigmatize autism "and related neurological profiles" in our culture. The first point is a rational policy that would no doubt attract widespread support. The second involves a chalenging cultural shift that goes beyond the immediate reach of our government — but where strong presidential leadership could unquestionably make a difference.

And when it comes to autism issues, Yang has provided some of the strongest leadership I've seen from any political candidate at any level.

He has done this by openly discussing the fact that his son is on the autism spectrum. It is a subject he has broached on programs like "The View" and during presidential debates. He has done this by recognizing the hard work of parents who raise children on the autism spectrum, including his wife Evelyn, and by saying that he has as much to learn from his autistic son as his child has to learn from him. He has made clear that many of his political values, including his empathy for those who struggle, stems from his familiarity with the struggles of those who must make their way through life with conditions on the autism spectrum.

Evelyn Yang, the candidate's wife, has said that these issues are "really important to talk about, because there's all this stigma around special needs, and autism specifically. And there really shouldn't be, because all our children have something special to offer. And our son has made our family better."

It's impossible for me to be emotionally detached on this issue — and if it were possible, I wouldn't want to do it. I am on the autism spectrum. Last year I interviewed Elmo and the first autistic muppet, Julia, on the set of "Sesame Street" to discuss raising autism awareness. The year before that I wrote an essay entitled "I'm a liberal because I'm autistic," in which I described how the economic insecurity that comes from being on the autism spectrum has shaped how I view politics and society.

I got some pretty vicious online ridicule for that last piece — and yet, in the Venn diagram of American politics, I suspect there's considerable overlap between the people who mocked me for saying that I'm a liberal because I'm on the spectrum and the Yang Gang of the 2020 campaign. Yang has drawn considerable support from the 4chan and Reddit crowd, people for whom the term "autistic" is an insult nearly on par with "cuck" or "snowflake." Yet many of these people discuss their problems with social interactions — from dealing with bosses and other authority figures to finding romantic and sexual partners — that suggest they may struggle with social skills and communication. That doesn't mean they're all on the spectrum, of course. But it suggests that many of them could be, and may be projecting more than a little when they throw around that term as an epithet.

Am I saying that some super-online people are attracted to the Yang campaign because he's so open about having an autistic child, and is of the curve when it comes to conversations about neurodiversity? If any of them are reading this article right now, I suggest they might want to consider that possibility.

As for Yang himself, I don't necessarily think he should be our next president, and at this point he has no realistic path to the Democratic nomination. But I hope his campaign will be influential when it comes to our public conversation about autism. Over the weekend, Yang and his wife hosted a public conversation about autism and family in Iowa City.

"We are the first family to be running for president publicly embracing the fact we are a special needs family," Evelyn Yang told a packed crowd in a coffee shop, according to the Iowa City Press-Citizen. Andrew Yang told a questioner he would support a federal subsidy for employers who hired people on the autism spectrum, saying, "I have a feeling that then many employers would figure out that that person has a lot to contribute."

We are in the middle of a brutal campaign cycle, one that makes it very easy to succumb to cynicism. In such a time, it's important to grasp at any straw of hope that can remind us of the best things in our political life, rather than the worst. Andrew Yang's neurodiversity breakthrough is one of them.