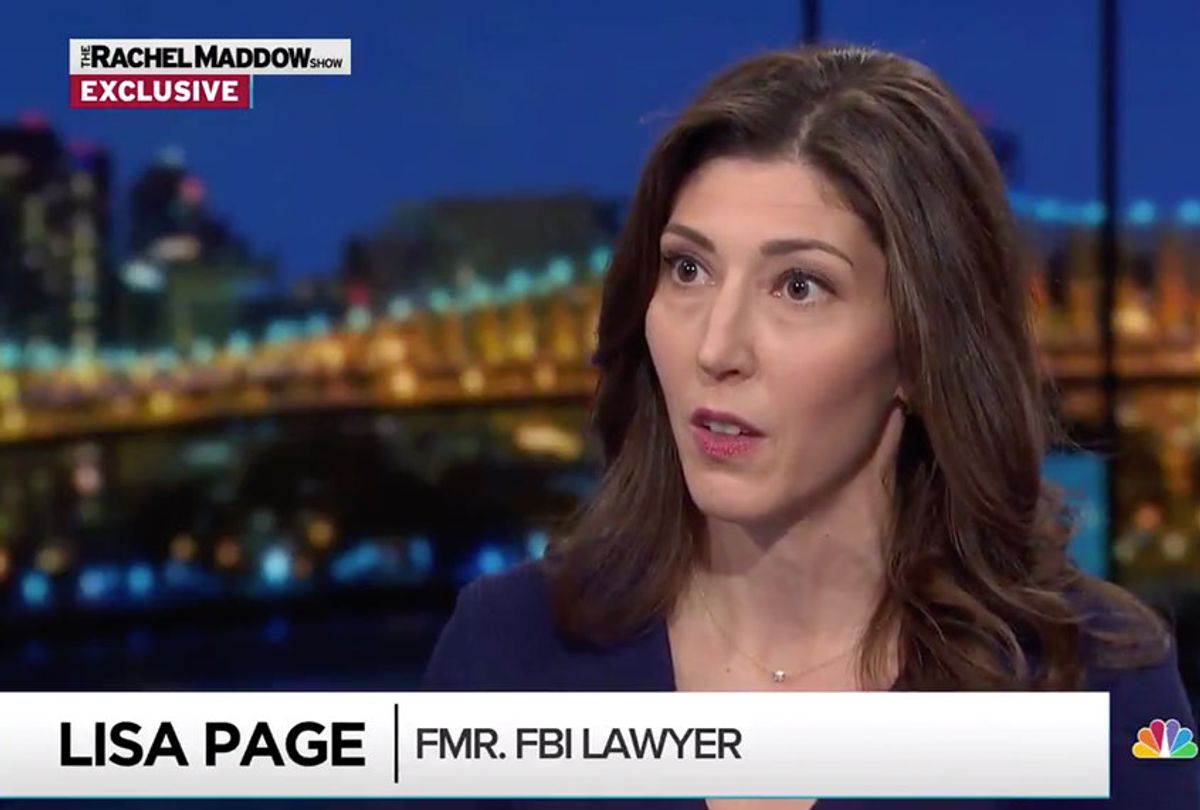 Former FBI lawyer Lisa Page spoke out on camera about her infamous text messages with former FBI agent Peter Strzok and the betrayal she felt from the Justice Department amid President Donald Trump’s relentless attacks Tuesday night for the first time.

Page, who left the FBI shortly after text messages critical of Trump sent by Strzok and herself were leaked to the media, broke her silence earlier this month in a Daily Beast interview ahead of the Justice Department’s inspector general report, which refuted Trump’s claims that bias at the FBI prompted the Russia investigation.

"When the president finally did that vile sort of simulated sex act,” Page said — a reference to Trump repeatedly crying, “Oh Lisa! I love you Lisa!” while reading her messages with Strzok at a rally — “I just finally had to accept it's not getting better, and being quiet isn't making this go away. And this wasn't working for me anymore . . . At least I have my voice out there. Ax  t least, if you want to respond, respond to me instead of this caricature that you've drawn up about me."

Page said the inspector general’s report was “two years too late,” adding that investigators found “what I’ve known from the beginning, which is that my personal views had no impact on the course of either investigation.”

Page called the president’s attacks “deeply unfair,” adding they were “not how public servants should be treated.”

Page said the DOJ’s decision to release some of her text messages to reporters felt like “my Justice Department betraying us.” Moreover, the text messages Trump and his supporters have repeatedly cited to claim bias behind the FBI’s investigation into Trump’s campaign advisers were misconstrued.

She claimed that her exchange Strzok about an “insurance policy” if Trump were elected was an “analogy” during a discussion about “whether or not we should take certain investigative steps or not based on the likelihood that he's going to be president or not.”

“You have to keep in mind: If President Trump doesn't become president, the national security risk — if there is somebody in his campaign associated with Russia — plummets,” she said. “You're not so worried about Russia's doing, vis-à vis a member of his campaign, if he's not president, because you're not going to have access to classified information — you’re not going to have access to sources and methods in our national security apparatus. So the ‘insurance policy’ was an analogy. It's like an insurance policy when you're 40. You don't expect to die when you're 40, yet you still have an insurance policy.”

Page said another message in which Strzok said “we’ll stop” Trump from being elected was not a reference to the FBI.

“By ‘we’ he’s talking about the collective we: like-minded, thoughtful, sensible people who were not going to vote this person into office,” she said.

Page is suing the Department of Justice and the FBI over their handling of the text messages.

"Obviously, in retrospect, do I wish he hadn't sent it? Yes," Page said. "It's been mutilated to death, and it's been used to bludgeon an institution I love. And it's meant that I've disappointed countless people. But this is a snapshot in time, carrying on a conversation that happened earlier in the day that reflected a broad sense of, 'He's not going to be president.' We, the democratic people who love this country, are not going to let that happen."

Despite the inspector general report refuting conservative claims that the FBI investigation was motivated by bias, criticism from Republicans has not waned.

“Two days later, you see Lindsey Graham in the Senate spend 40 minutes reading text messages again," she said. "These are three years old. They’ve been described as immaterial ultimately by the inspector general, and yet we’re still talking about them.”