It's zero hour: Why every House Democrat must vote to impeach Donald Trump 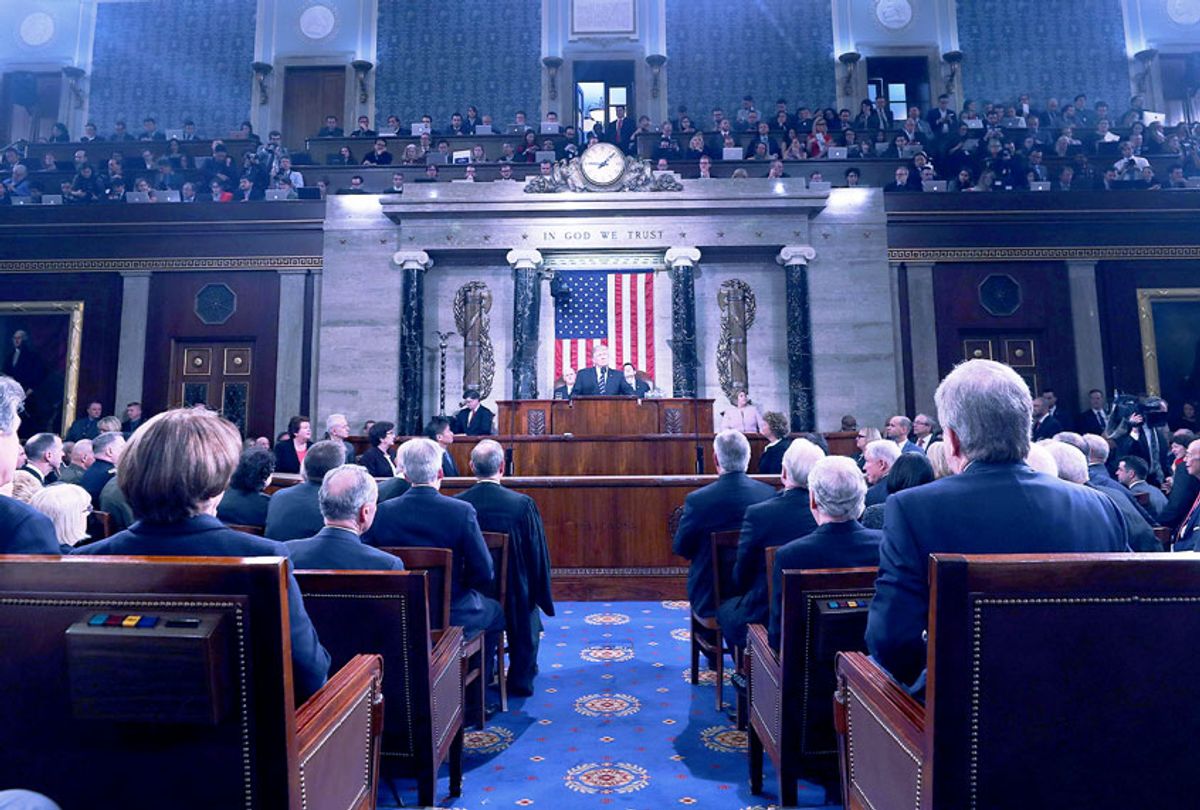 A joint session of Congress from the floor of the House of Representatives in Washington, DC (JIM LO SCALZO/AFP via Getty Images)
--

On Tuesday night, I braved the sodden ground and the cold, misty air to trudge to Thomas Paine Plaza in Philadelphia for a rally in favor of impeachment. It was the perfect distillation of everything I hate about protests: Tired chants, elected officials giving stump speeches that are barely related to the topic at hand, and, heaven help us, a folk group singing "funny" protest songs.

It sucked eggs. Still, even as I tried to suppress my Gen-X desire to scoff at everything earnest in sight, the name of the plaza — honoring the famous pamphleteer of the American Revolution — was enough to humble me. It reminded me of the central thing even my irony-soaked brain should not forget: Our democracy is precious and hard-won, and I have a duty, as we all do, to protect it.

So I stood in the rain and did not laugh at the folk singers, who, after all, had bothered to show up.

All of which is to say, if I had to get my feet wet and listen to some lame folk music, then, by God, the Democrats in the House of Representatives have absolutely no excuse for not voting for impeachment.

Right now, it's looking pretty good. The seriousness of this moment appears to be overriding the Democratic urge towards risk aversion and triangulation. Nearly all Democrats have committed to voting for impeachment. There are two known holdouts, and one of those, Rep. Jeff Van Drew of New Jersey, may be switching parties. But there are a few outstanding members who haven't committed yet, including presidential candidate Rep. Tulsi Gabbard of Hawaii.

Trust me, I understand the arguments that are sowing doubt among Democrats from Trump-leaning districts, who fear that a vote for impeachment will lead to defeat next year. It's better to have a Democrat in that seat so the party can hold its House majority, and that sometimes justifies ugly compromises for the sake of the greater good. Considering that Republicans have no intention of a fair impeachment trial in the Senate, let alone convicting Trump and removing him from office, it might seem like a futile gesture to vote for impeachment at great personal risk.

Ultimately, however, these arguments are self-serving rationalizations, as demonstrated perfectly by Van Drew, a quisling from a Republican-leaning South Jersey district who has decided he'd rather switch parties than take what he perceives as an unacceptable risk by voting to impeach Trump. (In fact, he's unlikely to save himself this way. His likely Republican challengers smell blood in the water and are already painting him as a coward and turncoat, because that's how Republicans thank you for helping them out.) As for Gabbard, a Democratic renegade in many ways, she has already she said she will not run for re-election.

The truth is that democracy itself is on the line. While we may not be able to save it by fighting, we sure as hell won't save it by not fighting.

Voting to impeach Trump may, on its own, be a futile gesture. But as activists throughout history can tell you, oftentimes change doesn't come until a lot of people make futile gestures over and over and over, until they add up to something that isn't futile.

The grim fact is that the entire Republican Party has rejected democracy. Most of the time they can't win in free and fair elections, so they're doing everything in their power to make sure America doesn't have real democracy. This process began long before Trump, with gerrymandering schemes, voter suppression and the gutting of campaign finance laws. It's part of the reason Donald Trump is even president, even though significantly more American voters preferred Hillary Clinton.

This is why the United States has been downgraded from a "full" to a "flawed" democracy, according to the Economist Intelligence Unit, and continues to decline.

But Trump has put his foot on the gas pedal, signaling that he and his co-conspirators, such as his lawyer Rudy Giuliani and his acting chief of staff Mick Mulvaney, will cross any line and break any law they deem necessary in order to distort, undermine and manipulate the 2020 election.

In the face of this, Democrats have only one choice: They must do whatever they can to make clear to the American public and the world that the entire Republican Party is corrupt and that every single one of its elected representatives on Capitol Hill wants to take away our democracy. The first step is to show Democratic unity, across all competing factions and tendencies, in the impeachment vote.

Yes, many mainstream outlets — particularly the New York Times, whose political reporters are, for whatever reason, committed to carrying Trump's water — will use the bitter divide not to highlight how far off the farm Republicans have wandered, but to paint this entire process as a regrettable partisan food fight in which "both sides" are equally to blame. That is a shameful failure to do their duty as journalists, and we can only hope history will cover them with shame.

Still, the heartening truth is that despite the fatally slanted media coverage, the majority of Americans see Trump as the con artist and cheat that he is. The only question now is whether or not they can be educated about a truth that is admittedly hard to swallow: The entire Republican Party has Trump's back. Republicans are not reluctant, intimidated Trump followers. They are gleeful about the new era Trump has launched, where they are liberated to be as corrupt and authoritarian as they want without consequences.

Of course this vote won't change things on its own. But it can be part of a larger movement for Democrats to seize every opportunity to remind voters that the differences between the parties are not just battles over health care policy, environmental regulations and judicial appointments, as important or crucial as those things are. It's about democracy itself, and whether Americans are entitled to have free and fair elections.

Any Democrat who votes against impeachment ought to face a primary challenge, and deserves to lose. This issue should transcend everyday politics. If Democrats can't stand up for the simple and straightforward principle of defending democracy, they have no business being in Congress.

Follow the example of Rep. Kendra Horn of Oklahoma, who won a surprise victory in 2018 and will face a tough re-election battle next year no matter what. She is clearly worried about losing in 2020 if she votes for impeachment. She has committed to do so anyway, saying in a statement that while she came to Washington "to find common ground by uniting lawmakers around bipartisan solutions," she has concluded "with a heavy heart, but with clarity of conviction" that she must vote for impeachment.

"Protecting and defending our Constitution is about preserving our democracy and systems for generations to come," Horn added.

That's exactly right. This effort may fail. Republicans control the Senate and have no inclination to do their duty. Donald Trump may go right back to committing crimes and trying to cheat in the 2020 election. He may succeed. Giuliani is still out there, trying to revive the moonbat, anti-Democrat (and anti-democratic) conspiracy theories that Trump's extortion scheme against Ukraine was meant to support. Republicans are shameless.

But this effort hasn't been a total wash. House impeachment hearings have drawn the public's attention to the details of Trump's crimes in a way that he's managed to avoid for most of his first term, including matters unrelated to Ukraine such as campaign finance fraud and stealing from his own charities. This vote will be historic and memorable. It will command attention in a way the onslaught of ordinary news simply cannot.

Democrats can make sure those headlines reflect the fact that one party stands united against election fraud, and on the side of Americans' right to choose their own leaders. To do that, all Democrats must vote to impeach this president. Any who fail to do so have failed their constituents, failed their country and failed their historical responsibility, and deserve to be driven from office.