Trump's unhinged letter illustrates that something is deeply wrong with the man. Major media still can't go there 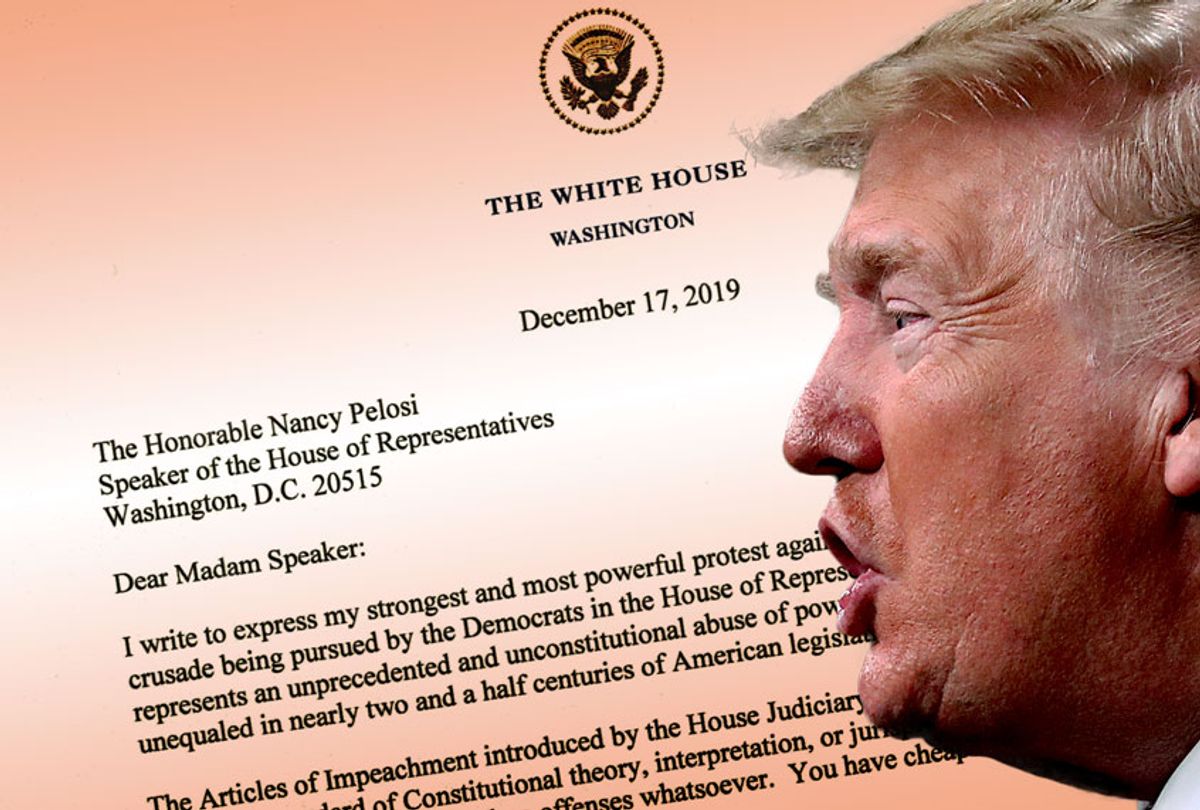 The livid, unhinged six-page rant full of lies, hyperbole, wild accusations and self-pity that Donald Trump put on White House letterhead on the eve of his impeachment — “for the purpose of history,” he said — was an extraordinary gift to news organizations that have hesitated until now to address Trump’s mental state.

To everyone but the willfully blind, it was effectively a confession of the president's unfitness for office — a view straight into the mind of a mad king unable to grasp basic facts, control his emotions or acknowledge any restraints on his behavior.

But after more than three years of applying the normal approaches to covering a profoundly abnormal presidency — and refusing to “take sides” on what they consider purely partisan disputes — our top political journalists are evidently unable to change course and consider that there is something deeply, psychologically wrong with the man.

So instead of writing that the letter was nutty, they called it “extraordinary.” Instead of identifying it as a sign that Trump is falling apart in plain view, one reporter — Ashley Parker of the Washington Post — actually wrote that it showed how “resilient” he has been in the face of adversity.

Some folks, like Democratic political strategist Jamison Foser, wondered what exactly Trump could do that would incite the mainstream media to forthrightly address his stability:

Indicating to readers how profoundly unhinged Trump’s letter was — and doing that right up there in the headline and the lede — was essential. That was its only real significance.

But our major news organizations have all failed the test.

Some had strong words, but they were still not sufficient.

The New York Times headline called the letter a “diatribe.” The Associated Press described it as “furious.” The Los Angeles Times called it “a screed that veered from grievance to grievance.” "ABC World News Tonight" described Trump as “ranting tonight in a scathing six-page letter.” "CBS Evening News" reported that the letter “had the seething, ranting hallmarks of a long-form presidential tweet.”

On CNN, Jake Tapper initially called the letter “a stunning and scathing stream of consciousness” and “something of a dictated 2,700-word rant,” before saying, “Honestly, this is almost like a letter that Kim Jong-un wrote, like, in terms of just, like, the hyperbole.” Getting warmer!

One of the harshest descriptions from a reporter came from John Roberts, who called it “visceral, angry seething” on Fox News' "Special Report." Even warmer.

But then there was that Washington Post story, so clueless, so brazen in its defiance of reason that it made brains explode all over Twitter.

Parker wrote that “Trump remains remarkably resilient” on the eve of his impeachment. She called the letter “fiery and freewheeling,” and wrote that “Trump’s ability to exist — and even thrive — amid historic tumult has worried Democrats.”

In short, as Trump came apart at the seams, Parker marveled at how he’s keeping it together.

Unfortunately it was the entire media — not just the Post — that badly misled the public.

New Yorker writer Susan Glasser responded to Jurecic’s comment by tweeting that it “captures a real challenge for those of us writing about the President.” She’s right. And that’s sad.

And here’s the thing: The letter really is nuts. As Washington psychoanalyst and author of “Trump on the Couch” Justin Frank tweeted:

Several news organizations offered fact checks of the letter: CNN, the New York Times and the Washington Post among them. But that didn’t make it OK for them to quote Trump’s bizarre, irrational and flatly wrong assertions in their main stories without any kind of rebuttal. (This is another example of fact-checking arguably making overall coverage worse, rather than better.)

Commentators on cable weren’t constrained by reporters’ self-imposed limits. Former Republican strategist Rick Wilson said on MSNBC that the letter was “six pages of pure crazy, weapons-grade nuts.” CNN political analyst Gloria Borger said: “I think if I’m a senator, a Republican senator, and I’m looking at this and this landed in my lap like a grenade today, I would wonder about the president’s fitness for office.”

But arguably the most honest coverage of the letter came in the New York Times summary of the late-night comedians:

“And this might be the most deranged letter to Santa ever. It is a long, stupid, disingenuous and incoherent defense, signed by an angry gorilla with a Sharpie. I mean, is this a signature or a seizure? This is why you don’t snort Sudafed on an empty stomach.” — Jimmy Kimmel

“I don’t even know how to describe the tone of it. I guess if you took the most privileged white lady ever and gave her a whole bottle of wine and then asked her to write a Yelp review of a restaurant that made her wait 40 minutes for a table and then got her order wrong twice.” — Seth Meyers

There is precedent for major events fundamentally changing the way our elite press corps covers a president. After a vacationing George W. Bush whiffed on Hurricane Katrina in August 2005, reporters were suddenly emboldened to acknowledge the profound weakness and incompetence they had covered up for since 9/11. George H.W. Bush’s coverage suddenly went south after he lost his lunch on the lap of the Japanese prime minister in January 1992.

Some images are indelible.

Reporters are complaining bitterly that the proceedings lack suspense. But they cannot be stripped of their drama.

It’s past time for the Washington press corps to see Trump for who he really is — and level with their public. Perhaps impeachment will offer them the inflection point they so desperately need.