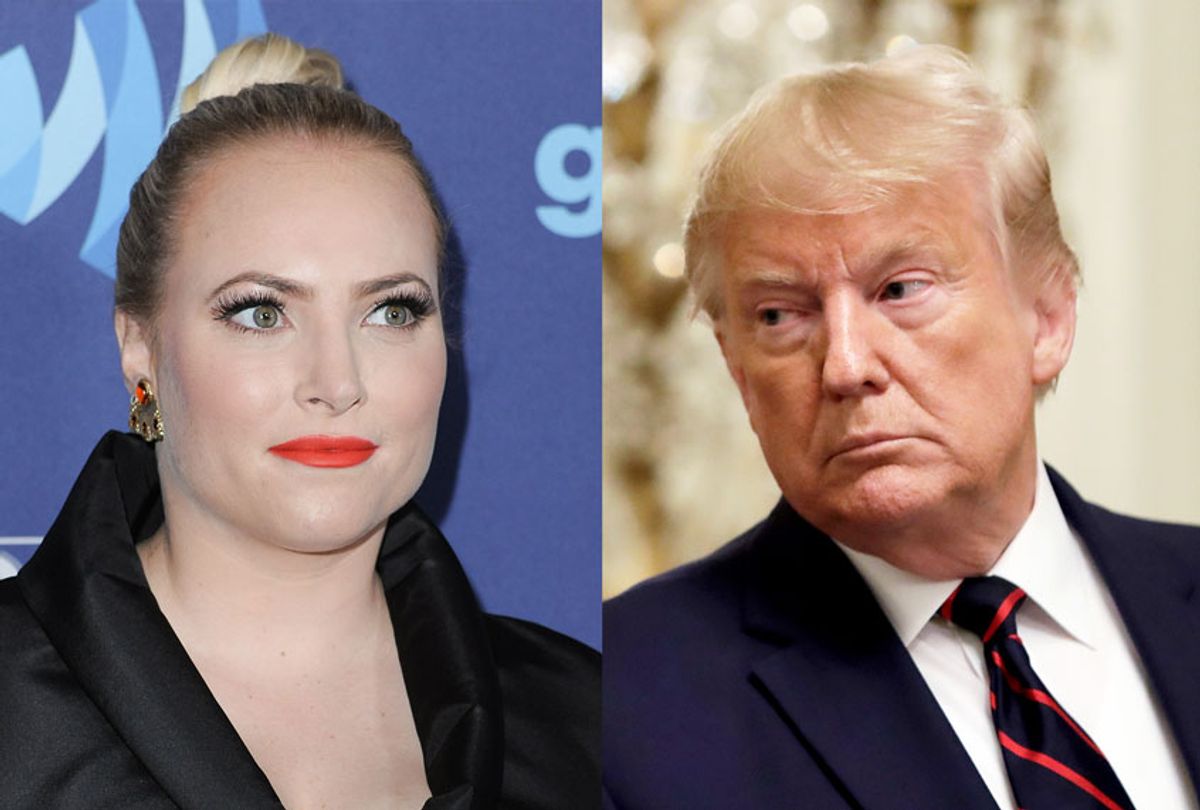 Meghan McCain, the conservative co-host of "The View," told President Donald Trump that “history will forever judge him very harshly” after the nation’s top executive suggested that a former congressman was in hell because his wife had voted to impeach him on Wednesday night.

“The comments from Trump about Rep Dingell is utterly sick and cruel. I am sending strength to the Dingell family, especially his wife Debbie. Take heed in knowing he only attacks people for whom he is threatened by their great legacies. History will forever judge him very harshly,” McCain tweeted.

McCain has also been the subject of presidential attacks against a deceased family member. Trump expressed anger after her father, the late Sen. John McCain, R-Ariz., did not thank him for him for his funeral, even though he was already dead.

"I gave him the kind of funeral he wanted, which as president I had to approve," Trump said in March. "I don't care about this, but I didn't get a thank you. That’s OK. We sent him on the way, but I wasn't a fan of John McCain."

The president’s latest controversial remarks came at a campaign rally, which occurred moments after Trump joined Andrew Johnson and Bill Clinton as only the third president in American history to ever be impeached

“Debbie Dingell — that’s a real beauty,” Trump said at a rally in Michigan, appearing to reference the physical appearance of the representative from Michigan. The president told the crowd that he had given Dingell “A-plus treatment” when her husband, former Rep. John Dingell, passed away earlier this year.

“I gave them everything," he said. "That’s OK. I don’t want anything from it. I don’t need anything for anything."

Trump claimed that Rep. Debbie Dingell had expressed gratitude after her husband’s passing by allegedly telling the president, “John would be so thrilled. He’s looking down. He’d be so thrilled.’” The president then took a sharp turn, suggesting the late congressman was now in hell: “Maybe he’s looking up — I don’t know.”

“Mr. President, let’s set politics aside,” Rep. Debbie Dingell tweeted Wednesday in response to the president’s attack. “My husband earned all his accolades after a lifetime of service. I’m preparing for the first holiday season without the man I love. You brought me down in a way you can never imagine and your hurtful words just made my healing much harder.”

Cindy McCain, the widow of the late Sen. John McCain, responded to Rep. Debbie Dingell’s tweet by saying, “I’m terribly sorry. Please know I am thinking about you.”

Meghan McCain also followed up on her original tweet by adding, “This is horrific. Just horrific. It’s hard for me to eloquently say how disgusted I am by this. I am just so deeply sorry the Dingell family is being subjected to this bile. Is this what the Trump family version of #BeBest is? Bullying widows at a public rallies? SICK.”

Trump also attempted to downplay the severity of impeachment by touting his purported accomplishments as president.

“It doesn’t really feel like we’re being impeached. The country is doing better than ever before," he claimed. "We did nothing wrong. We have tremendous support in the Republican Party like we’ve never had before.”

Rep. John Dingell was the longest-serving congressman in American history across nearly six decades from 1955 to 2015. Earlier this year, he passed away from prostate cancer, prior to which he wrote an editorial for The Washington Post in which he described how he felt America had changed since he first entered Congress.

“We’ve made progress — and in every case, from the passage of Medicare through the passage of civil rights, we did it with the support of Democrats and Republicans who considered themselves first and foremost to be Americans,” Rep. John Dingell wrote.

Of his wife, he added: “I would be remiss in not acknowledging the forgiveness and sweetness of the woman who has essentially supported me for almost 40 years: my wife, Deborah. And it is a source of great satisfaction to know that she is among the largest group of women to have ever served in the Congress (as she busily recruits more).”