"We were sent here to lead," Rep. Alexandria Ocasio-Cortez said as she questioned why Gabbard didn't "take a stand" 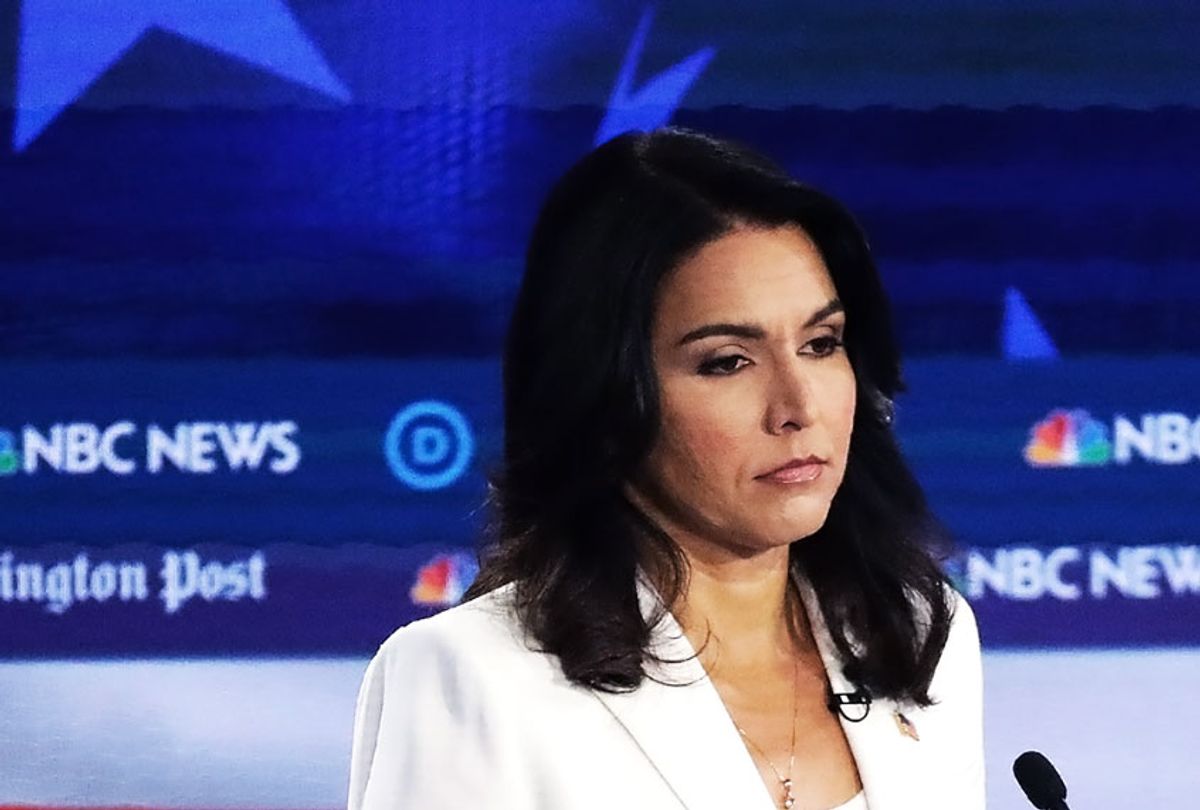 Rep. Tulsi Gabbard, D-Hawaii, came under fire from her Democratic colleagues after casting the lone “present” vote on both articles of impeachment against President Donald Trump.

Gabbard, who has repeatedly expressed reluctance of the impeachment process, instead advocated for Trump’s censure. She skipped the House procedural votes in the morning and did not appear in the chamber until the end of the vote on the first article of impeachment.

“Tulsi Gabbard, who was mysteriously missing all day, is in the chamber and has voted 'present,'" MSNBC anchor Brian Williams reported during the network’s coverage of the vote.

“That’s just stupid,” former Sen. Claire McCaskill, D-Mo., said. “I mean, what is the point? I don’t know what this woman thinks she’s accomplishing by that. I guess getting attention. We’re talking about her, and really we shouldn’t spend any time talking about her.”

Gabbard said in a statement after reviewing the 658-page impeachment report, “I came to the conclusion that I could not in good conscience vote either, 'yes' or 'no.'”

“I am standing in the center and have decided to vote 'present,'” she said. “I could not in good conscience vote against impeachment, because I believe President Trump is guilty of wrongdoing. I also could not in good conscience vote for impeachment, because removal of a sitting president must not be the culmination of a partisan process fueled by tribal animosities that have so gravely divided our country.”

Gabbard reiterated her call for a vote on her censure resolution.

“Trump has violated public trust. Congress must be unequivocal in denouncing the president’s misconduct and stand up for the American people and our democracy," she said. "To this end, I have introduced a censure resolution that will send a strong message to this president.”

She added that her 'present' vote was a “vote for much needed reconciliation and hope that together we can heal our country.”

MSNBC reporter Garrett Haake pointed out that the statement was released by her presidential campaign — not her House office — “which tells you quite a bit.”

“Not sure how [Gabbard] can defend a ‘present’ vote on impeachment,” he tweeted. “One of the most consequential votes in any politician’s career and you can’t make a call one way or another? Why even be there, collecting a taxpayer-funded paycheck?”

Gabbard’s House colleagues were also not impressed with her decision.

“Today was very consequential, and to not take a stand one way or another on a day of such great consequence to this country, I think is quite difficult. We are sent here to lead,” Rep. Alexandria Ocasio-Cortez, D-N.Y., told BuzzFeed News after the vote. “Whenever we have a vote, we should vote ‘yes,’ and we should vote ‘no.’ Voting ‘present’ is a very tough position to be in. To not take a stand in a moment that is so consequential — I think it’s quite difficult.”

Gabbard countered criticism in a video posted to social media.

“I’ve always worked to do what is in the best interest of our country — not what’s best for me politically, not what’s best for my political party,” she said. “One may not always agree with my decisions, but everyone should know that I will always do what I believe to be right for the country that I love.”

Gabbard has long been a source of consternation among Democrats. She came under fire after traveling to Syria in 2017 to meet with President Bashar al-Assad, who has been accused of multiple war crimes. She has frequently appeared on Fox News, where she often criticized former Democratic presidential nominee Hillary Clinton in addition to impeachment.

ABC News political analyst Matthew Dowd called the 'present' vote “about the worst decision you can make in this important moment in history.”

He added, “How does she run in the Democratic primary after this?”

Others could not help but notice the pointed look on Speaker of the House Nancy Pelosi’s face after she read the lone 'present' vote.