Warren, Sanders and Klobuchar benefited from an improved format — but Buttigieg seemed mean and Biden rudderless 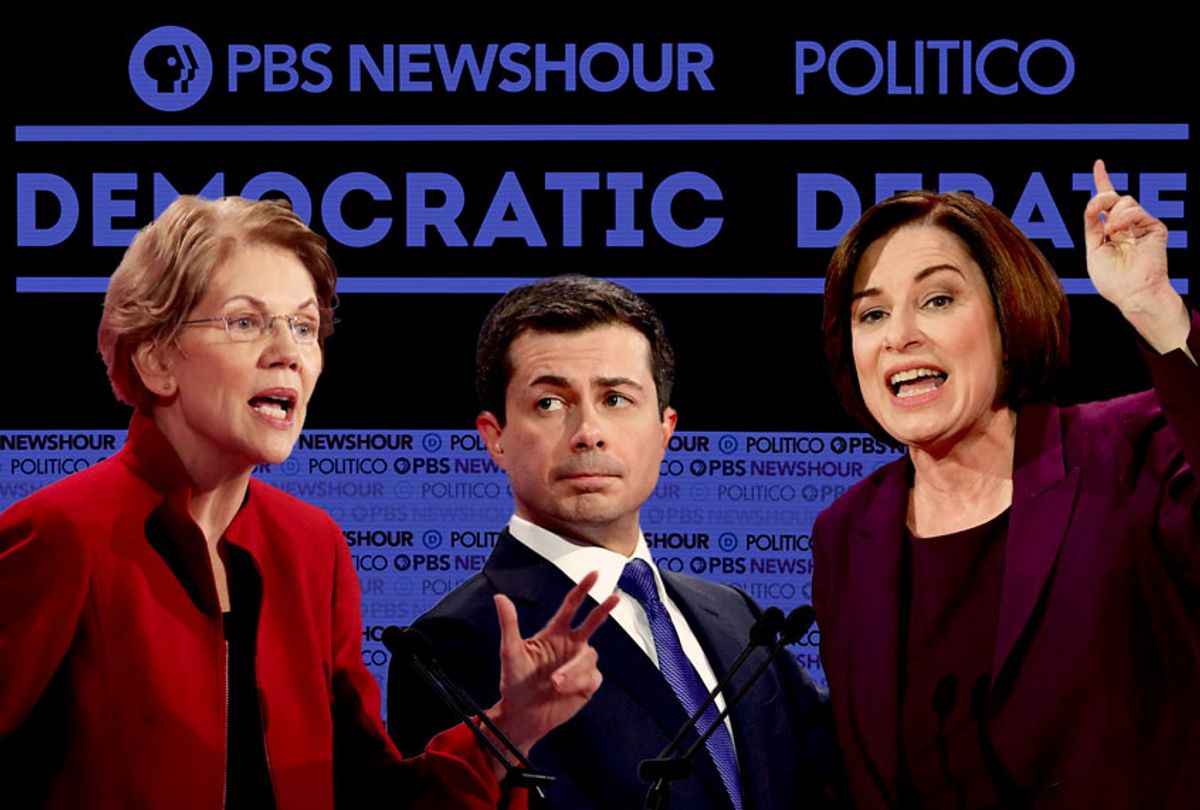 For the last Democratic primary debate of the year, hosted by PBS at Loyola Marymount University in Los Angeles, the tone was somber — and thankfully so. Gone were most attempts by candidates to land well-rehearsed jokes that always fall flat (though Sen. Amy Klobuchar did trot out a few groaners). What was present, in the most welcome way, was a real focus on giving the candidates — cut down to seven from the November debate's 10 — time and space to answer questions in full paragraphs that actually give voters a sense of what these folks vying to run against Donald Trump in November stand for, and how they think.

It was just what the Democratic primary race needed, especially in the week that Trump was impeached and Senate Majority Leader Mitch McConnell made it clear that he has no intention of protecting our democracy against his orange master's ever more fascistic criminal schemes. Voters don't need to hear Democrats vying poorly to fit some glib, cable news idea of "entertainment." Voters need to know who these candidates are, which is something that can only be accomplished by giving them actual space to talk.

The results were  illuminating. Klobuchar, Sen. Bernie Sanders of Vermont, and Sen. Elizabeth Warren of Massachusetts all came across the actual grown-ups in the room. Sanders, as usual, impressed with his moral clarity. Klobuchar is an unapologetic centrist, but presented a strong case for her competence as a leader and ability to pull the levers of power to get things done. Warren, in particular, took advantage of the time to show off her earnest intelligence and in-depth knowledge of both policy and the strategies needed to get those policies passed.

Both former Vice President Joe Biden and South Bend, Indiana, Mayor Pete Buttigieg also gave voters a more in-depth look at what they have to offer — and the effects were not exactly great.

Buttigieg came across — there's no nice way to say this! — as a mansplainer. He tore first into Warren, and then, in case anyone missed the pattern, went after Klobuchar for good measure. He leaned heavily into every disagreement with the two women on stage, drawing them into long fights that got straight-up nasty — in direct contrast with the rest of the night, when candidates emphasized how much they liked each other, even when disagreeing.

Buttigieg fans online insisted that he was only responding to criticism, but the truth is that Warren had not mentioned him by name, only mentioning big-money fundraisers, when the mayor took his shot. He pounced right away with a hectoring, condescending tone, repeatedly using the phrase "purity tests" and then applying one of his own, trying to shame Warren for making money in her private legal career.

He even outright said "I know this isn’t likely" that Warren doesn't have the capacity to go home and enjoy "the holiday spirit", which was an ugly, sexist moment, leaning heavily on misogynist stereotypes about ambitious women being joyless and lacking nurturing feelings.

Then, in case there was any confusion about Buttigieg's preferred spat opponents, he pulled the same trick with fellow centrist Klobuchar, complaining that there's "bigger fish to fry" when the Minnesota senator suggested he lacks experience. Klobuchar, however, let the side of her that scares her staff flash out for a moment, pointing out Buttigieg had lost his statewide race in Indiana (a campaign for state treasurer) by 20 points.

It was markedly different than how Buttigieg spoke to the other men on the stage. This included Sanders, who criticized Buttigieg directly and did not get a patronizing response. Or tech entrepreneur Andrew Yang, who also made a crack about Buttigieg's "wine cave" fundraiser and did not get a snitty response.

How this plays with voters is anyone's guess. My dark side thinks that Buttigieg might be using these conflicts to remind Democratic primary voters of their fears that a woman "can't" win (even though a woman got nearly 3 million more votes than Trump in the last election). But this might also turn off women, who are the majority of Democratic voters and have dealt with their fair share of men with less knowledge and experience who still talk to women as if they were stupid.

It wasn't just women who noticed this, either.

Joe Biden came across as more relaxed and, frankly, more coherent than in past debates, but still struggled in this more substantive conversation. In the shadow of the impeachment vote, where every Republican member of the House signed off on Trump committing crimes to cheat in the 2020 election, Biden himself seemed aware that his claim that he can create bipartisan cooperation is not persuasive.

"The fact is we have to be able to get things done. And when we can't convince them, we go out and beat them like we did in the 2018 election in red states and in purple states," Biden said, giving in slightly to the reality that Republicans are incorrigible.

But later, the former veep stumbled when confronted with a question that exposed the emptiness of  his "work with Republicans" pitch, when he was asked about the Obama administration's failure to close the Guantánamo Bay prison camp in Cuba. Biden started to give the factually correct answer — Republicans in Congress prevented them from doing it — but then suddenly pivoted to a babbling answer about Israel. Odds are he realized that he was about to admit that the main problem with his "work with Republicans" plan was Republicans, and clumsily pivoted rather than expose the fundamental paradox of his campaign.

Biden also floundered when confronted with Barack Obama's recent remark that "old white men" need to get out of the way and let other people have power. While the room laughed when Biden denied that Obama was speaking about him, that only ended up emphasizing that Obama was, in fact, probably speaking specifically about him.

Both billionaire Tom Steyer and businessman Andrew Yang, given time to speak at length, used that time to show how far out of their depth they were. Steyer regurgitated progressive ideas he's picked up along the way, without showing much evidence that he has any deep understanding of them. Yang hilariously kept trying to argue that a universal basic income of $1,000 a month was a cure for everything — even, at one point, arguing it might increase racial diversity in candidate choice.

Warren, as usual, came across as the smartest person in the room, but she was clearly sweating the narrative that she's not "electable." Indeed, the reason she even mentioned Buttigieg's high-dollar fundraisers is because she's running on an anti-corruption platform, both on the grounds that it's the only way to get things done and because it's the best way to beat Trump.

"We need a candidate for president who can draw the sharpest distinction between the corruption of the Trump administration and a Democratic nominee who will root out corruption," Warren said, early in the night.

Outside the mansplaining tiffs, most of the night was cordial. We can hope that voters actually got a good sense of who the candidates were — and who's actually ready for a general election against Donald Trump. It's a travesty that Buttigieg and Biden are doing so well in the polls, when Klobuchar, Warren and Sanders are making stronger cases. Maybe voters actually tuned in to this far more serious debate, and could see the vast gulf between those who should be leading and those who just don't have the juice.