The House passed a measure to screen recruits for white nationalist views. Those words vanished in the Senate 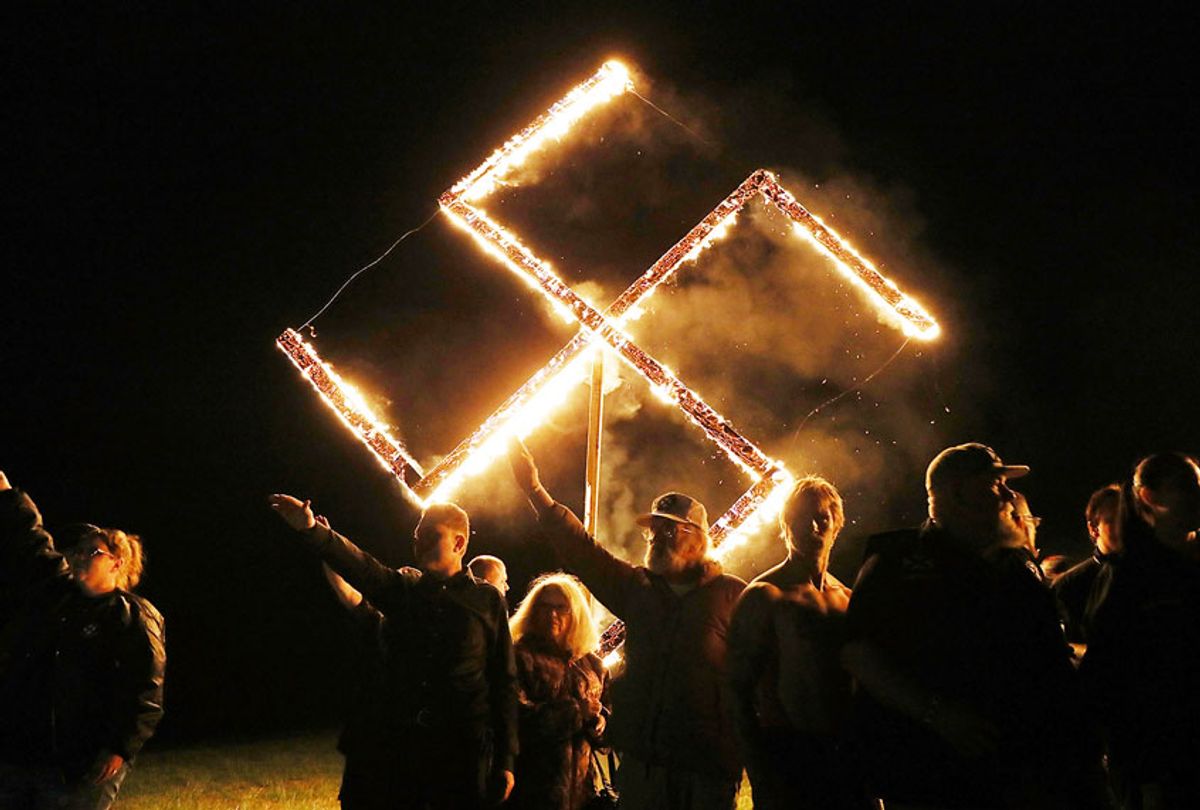 Members of the National Socialist Movement, one of the largest neo-Nazi groups in the US, hold a swastika burning after a rally on April 21, 2018 in Draketown, Georgia. Community members had opposed the rally in Newnan and came out to embrace racial unity in the small Georgia town. Fearing a repeat of the violence that broke out after Charlottesville, hundreds of police officers were stationed in the town during the rally in an attempt to keep the anti racist protesters and neo-Nazi groups separated. (Spencer Platt/Getty Images)
--

The amendment sought to address white nationalists in the military by requiring the secretary of defense to “study the feasibility” of screening for “individuals with ties to white nationalist organizations.”

But the Republican-controlled Senate passed its own version of the bill and the term “white nationalist” was quietly removed when the two bills were reconciled, HuffPost reported.

The final version of the NDAA now calls for the Pentagon to screen military enlistees for “extremist and gang-related activity.”

It’s unclear who changed the language in the bill or why it was altered. Members of the Senate Armed Services Committee, including Chairman Jim Inhofe, R-Okla., did not comment on the report.

Aguilar told HuffPost that white nationalists have already “successfully enlisted in our military in order to gain access to combat training and weaponry.”

“We cannot turn a blind eye to this growing problem which puts our national security and the safety of the brave men and women serving our country in jeopardy,” he said. “It’s disappointing that Senate Republicans disagree.”

The move comes after a series of stories revealing an alarming rise in white nationalism in the military.

A 2017 poll from the Military Times found that nearly a quarter of all service members had “experienced examples of white nationalism in the military,” including 42 percent of non-white troops.

That poll came nearly a decade after a 2008 FBI report warned that “white supremacist leaders are making a concerted effort to recruit active-duty soldiers and recent combat veterans of the wars in Iraq and Afghanistan.” Nearly a third of service members believe that white nationalism in the military is a bigger threat than Afghanistan or Iraq, according to the Military Times poll.

The military launched an investigation into 11 members of the Marines, Air Force and Army, and the Texas and Minnesota National Guard, after HuffPost reported their ties to Identity Evropa, which was labeled a “white supremacist” group by the Anti-Defamation League.

“The fact that Senate Republicans are actively working to help shield white nationalists in the military should set off alarms across the country,” said journalist John Stanton.

Amy Spitalnick, the executive director of Integrity First for America, an organization suing the Nazis that attacked Charlotteville in 2017, said the move shows that Congress is willfully ignoring “the crisis of white nationalism in America.”

“When they ask where they were radicalized,” added journalist Kaz Weida, “you can point to a Republican-controlled Senate.”