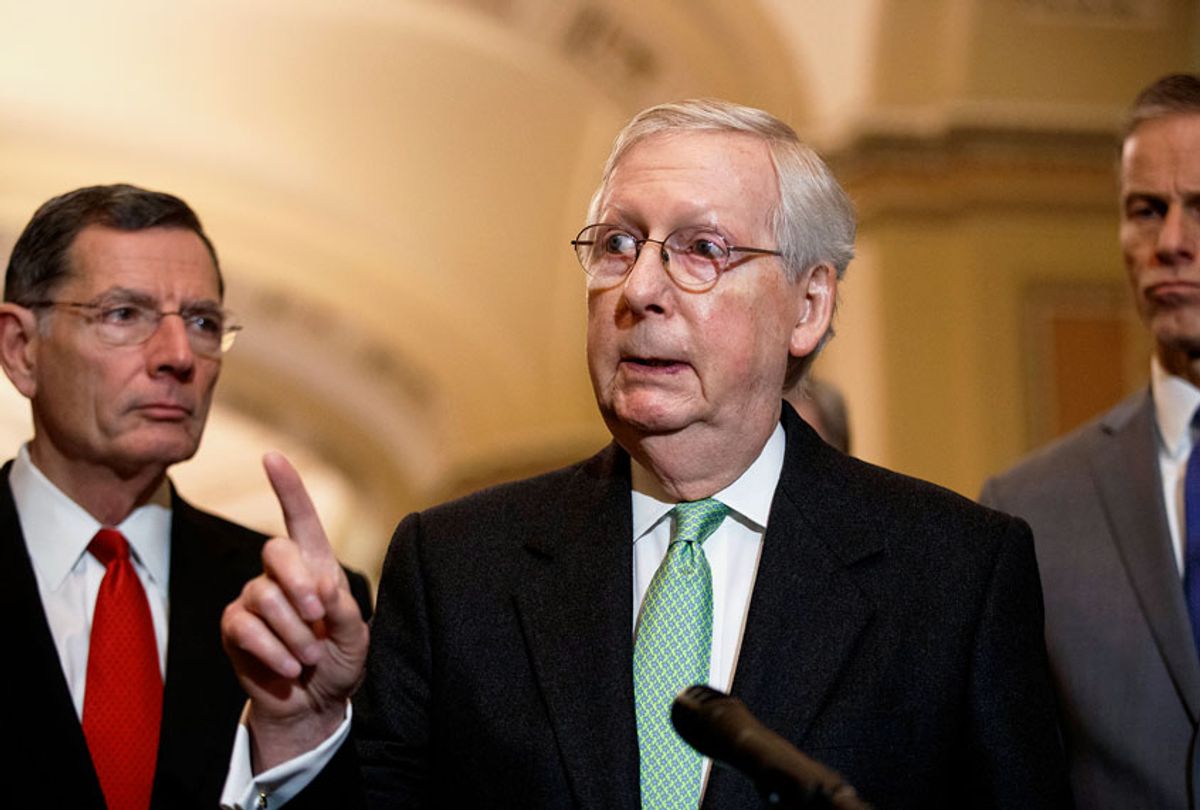 Senate Majority Leader Mitch McConnell, R-Ky., said Thursday night that he had reached an "impasse" with Senate Minority Leader Chuck Schumer, D-N.Y., over rules governing a Senate trial of President Donald Trump, who was impeached by the House of Representatives on Wednesday.

McConnell and Schumer have been at odds in recent days over their competing views about the parameters of a Senate impeachment trial. Because the Constitution does not detail the parameters of a trial, a simple majority of senators need to set rules for the proceedings.

Speaker of the House Nancy Pelosi, D-Calif., suggested that she may not submit the two articles of impeachment against Trump to the upper chamber unless McConnell and Schumer broker a deal on the rules of the trial.

Trump on Wednesday night became only the third president in history to face removal from office by the Senate for "high crimes and misdemeanors." The articles of impeachment approved by the House of Representatives accuse the president of abusing his power by leveraging congressionally-approved military aid for his personal and political gain and of obstructing the congressional inquiry into his dealings with Ukraine.

There is no constitutional requirement mandating that the articles of impeachment be sent to the Senate within a certain timeframe — or even at all — but a Senate trial can only kick off once the articles are delivered. The standoff between McConnell and Schumer could force Trump to wait indefinitely to be acquitted by the GOP-controlled Senate.

Holding back the articles has emerged as a divisive issue among congressional Democrats in recent days, as McConnell has his hope that the Senate will act swiftly to acquit the president clear amid his public vow that he will not act as an "impartial juror" during the Senate trial. The Republican leader also rejected a proposal earlier this week from Schumer to hear testimony from four administration witnesses who have not previously testified in the inquiry, including acting White House chief of staff Mick Mulvaney and former national security adviser John Bolton. McConnell has said the trial should not include any witnesses.

Democrats who favor delaying sending the articles to the Senate believe the move could put pressure on McConnell to compromise on a rules package for a trial. Those opposed have expressed concern that withholding the articles could be interpreted as a game of political chess, which could ultimately backfire.

In a brief Senate floor speech Thursday evening, McConnell said he had a "cordial" conversation with Schumer earlier in the day about the "potential paths forward" for a Senate trial.

He reiterated that he would like the Senate to follow the model of the five-week impeachment trial of former President Bill Clinton in 1999. During the Clinton trial, senators passed two resolutions: one on the process, which passed unanimously, and a second calling witnesses, which broke down along party lines. But earlier this week, Schumer asked for a resolution to be passed at the start of the trial, which would determine both the rules for proceedings and any specific witnesses who would be called to testify.

"We remain at an impasse, because my friend, the Democratic leader, continues to demand a new and different set of rules for President Trump," McConnell said Thursday. "He wants to break from the unanimous bipartisan precedent and force an all our nothing approach."

McConnell also criticized Pelosi for taking the "highly unusual step" of waiting to submit the approved House articles of impeachment against Trump to the upper chamber. He said he did not understand the speaker's move, and while flashing a smile, that he did not agree with the idea that delaying the transmission might give House Democrats the upper hand in determining the rules of the Senate trial.

"I admit, I'm not sure what leverage there is from refraining from sending us something we do not want," McConnell said. "So we have this fascinating situation where House Democrats' rush to impeachment following weeks of pronouncements about the urgency of this situation. The prosecutors have now developed cold feet."

Trump also condemned the possibility that Democrats could delay submitting the articles to the upper chamber, tweeting Thursday: "So after the Democrats gave me no Due Process in the House, no lawyers, no witnesses, no nothing, they now want to tell the Senate how to run their trial. Actually, they have zero proof of anything, they will never even show up. They want out. I want an immediate trial!"

In another tweet, the president wrote, "Pelosi feels her phone impeachment HOAX is so pathetic she is afraid to present it to the Senate, which can set a date and put this whole SCAM into default if they refuse to show up! The Do Nothings are so bad for our Country!"

Schumer told reporters Thursday that he plans to force a vote on the Senate floor during the trial calling for witnesses to testify. A motion to call witnesses would only require a simple majority, meaning Democrats would need to win over four GOP senators in order to reach 51 votes. The Democratic leader declined to say whether he would prefer not to have a trial over having one with rules set by McConnell.

"I think it's premature to map out what'll happen two, three, four weeks from now," he said. "We're going to do everything we can as best as we can to guarantee there's a fair trial."

Senate Republicans ultimately have the power to set trial rules without Democratic votes, but that will require unity from at least 51 members of the 53-member GOP caucus.