"I am willing to tell the truth": Democratic candidate Tom Steyer called for Trump's removal in 2017 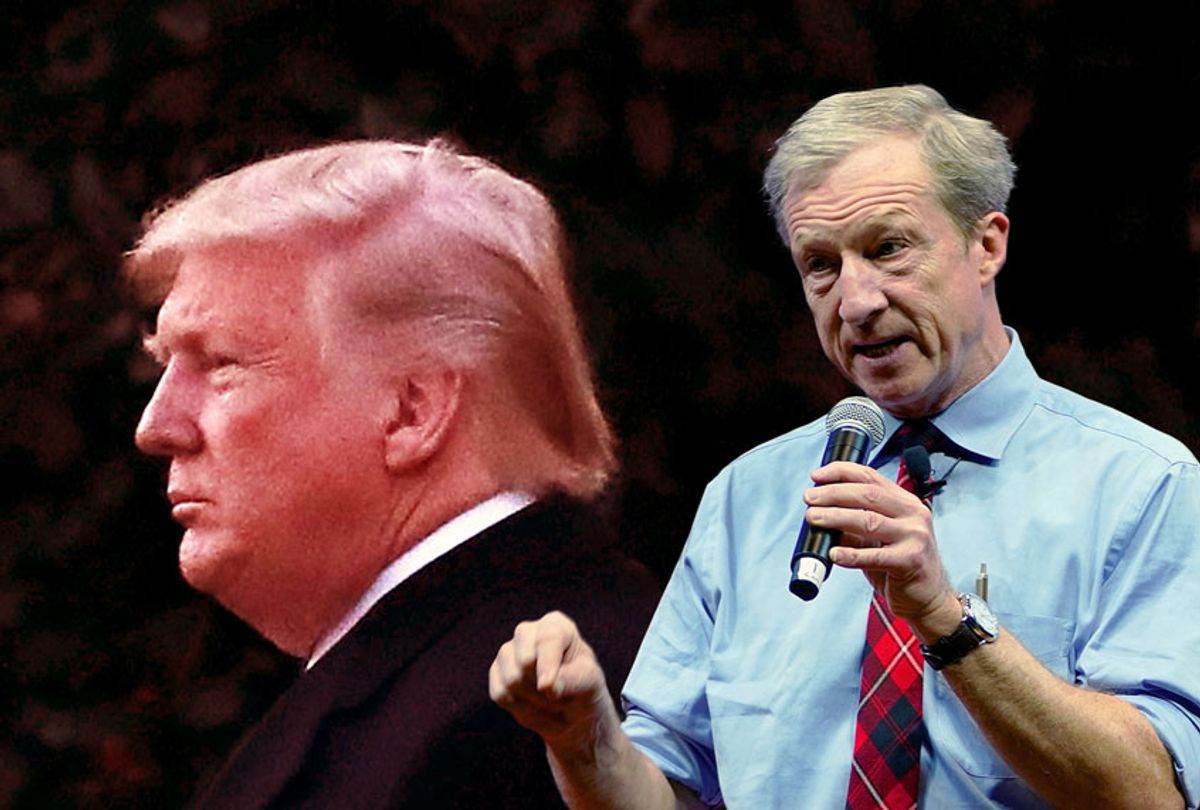 Following historic impeachment of President Donald Trump in the House of Representatives on Wednesday, Tom Steyer — the billionaire hedge fund manager currently seeking the Democratic presidential  nomination— told Salon that he deserves credit for pushing for the Republican’s removal from the Oval Office as far back as October 2017 through his group “Need to Impeach.”

It was a cause which Steyer pursued for nearly two years before he scaled back the group's activities when he decided to run for president over the summer. In the process, Steyer integrated some of the organization and its materials into his campaign.

“I think my starting ‘Need to Impeach’ does say something about me. And that's this: I am willing to tell the truth and do the right thing when conventional wisdom says to do the opposite,” Steyer told Salon in a phone interview. “I was pushing for the impeachment of this president, because it was the right thing to do when conventional wisdom in Washington on both sides of the aisle was: 'This is a dream and a far-fetched impossibility.' What I saw was: 'There's something wrong here.' This is a matter of right and wrong, and protecting the American people and American people taking back power for ourselves."

He added, “My history is being willing to side with the people against the elites, which is exactly what this was — and to try and organize the power of the people to take on those elites and beat them. That's really what happened here.”

Steyer was also critical of Rep. Tulsi Gabbard of Hawaii, one of only four Democrats to not vote affirmatively for both articles of impeachment facing Trump. Gabbard voted “present” instead of coming out in favor of or against impeachment. Reps. Collin Peterson of Minnesota and Jeff Van Drew of New Jersey voted against both articles, while Rep. Jared Golden of Maine voted against one.

“I think that this was a very clear-cut vote,” Steyer said. “This is the most corrupt president in American history. I think he was brought up on limited charges. But his corruption started his first day in the White House, and his obstruction of justice started the first day in the White House. I don't think this was a close vote, and I think that there was only one proper answer, which is he should be impeached. And I thought that for over two years, and I feel it more strongly today.”

When asked again how he felt specifically about Gabbard’s voice, “I think there was only one correct vote — and that was to impeach.”

Steyer also came out in favor of Speaker of the House Nancy Pelosi withholding the articles of impeachment until a fair trial can be guaranteed.

“I think that [Senate Majority Leader] Mitch McConnell is trying to go against the Constitution,” Steyer said. “He has said he's not trying to be objective or fair about this. His job is to respect his oath to the Constitution and the American people — not to side with the president, not to side with his political party. I think that Nancy is trying to make sure that we have a fair and open trial, which is what the American people deserve.”

The billionaire disagreed with concerns that the impeachment process could boomerang against Democrats and help re-elect Trump.

“I think we should stop listening to what Mr. Trump says, since he's lied about 15,000 times and start looking at what he does,” Steyer said. “He's terrified of impeachment. He is having a heart attack about impeachment. He can say as many times as he wants that it's good for him, but he's lying. And he's a multiple thousand time liar. No, he's being exposed. He's not being exposed as thoroughly as he deserves — as the most corrupt president in American history. And he’s putting himself ahead of the American people.”

He added, “If you actually look at how the [Richard] Nixon public opinion polls went, it went very, very, very close to how this is going. The difference is that he’s trying to prevent an actual fair trial with testimony by the members of the administration. He's trying to obstruct justice. But I'm not worried about whether it's good for the president to be exposed on TV as a corrupt criminal and an instructor of justice who's putting himself ahead of the American people. Politically, I don't think that that's a winning argument for somebody.”

In the summer of 1973, when the Watergate scandal began to become a crisis for Nixon’s presidency, only 19 percent of American adults supported impeaching the president and removing him from office. By the time he resigned in August 1974, that number had risen to 57 percent. By contrast, a recent Wall Street Journal/NBC News poll found that 48 percent of Americans want Trump impeached and removed from office, while 48 percent want him to remain in office.

Speaking to Salon in February about "Need to Impeach," Steyer said: “if you allow a criminal, if you allow somebody who is lawless — who’s committed lawless acts as president, that everyone agrees has done that — and you decide that you will allow him to stay in office, you have made a decision as a country that the rules only apply to the people that you choose to apply them to, and when it’s convenient for you to apply them. That is a terrible thing for a country to decide, that in effect we no longer believe in the rule of law, the president is above the law.”