Best of 2019: My priest was an accused abuser 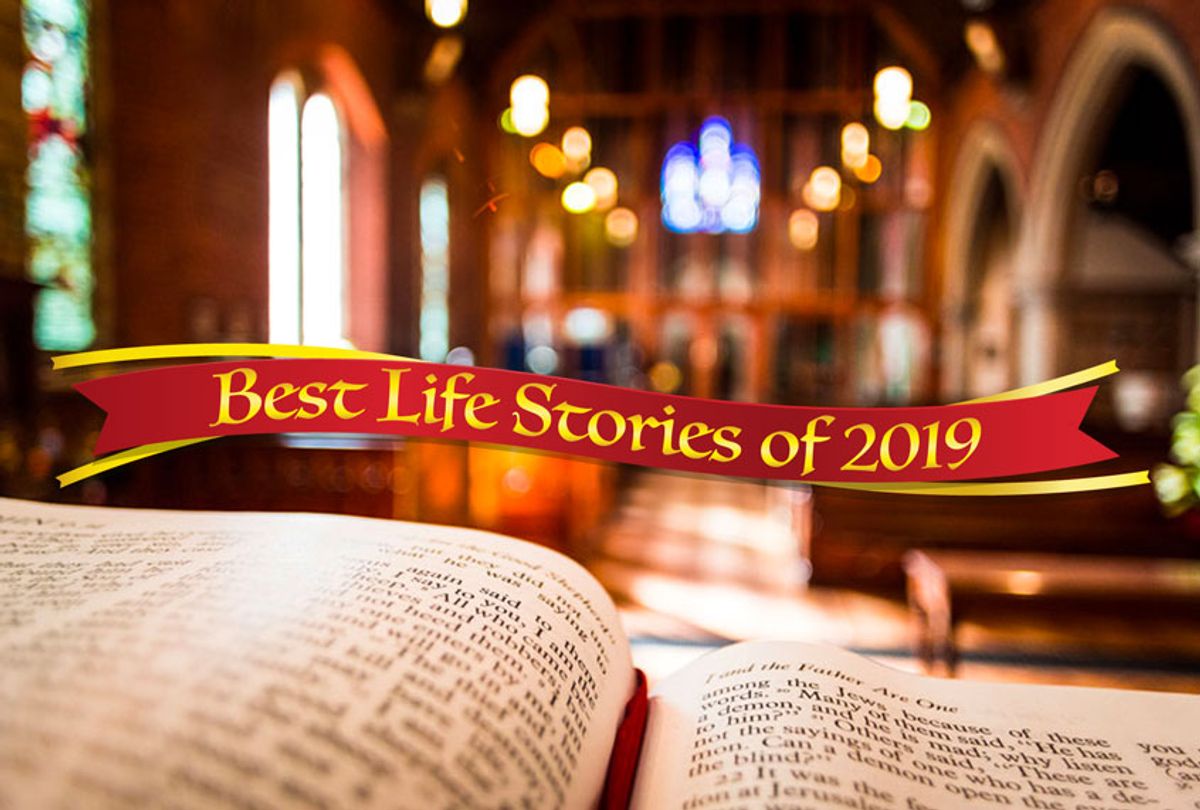 This life story was originally published on Salon on May 4, 2019.

In the photograph, I am smiling brightly, and so are the two men I am standing next to. One is the future father of my children. The other is currently accused of sexual abuse involving "multiple" victims: his name is Robert Chabak. That's how he signed my marriage certificate. We called him Father Bob.

I've wondered over the last several years, of course, about the priests of my youth. As revelation upon revelation of sexual abuse in the Catholic church has emerged, I asked myself if I had known any of the men involved, if the cash I'd faithfully tucked into my collection plate envelopes had gone toward settlements with victims. I've talked to survivors — including a family friend whose courage in coming forward was a key part of the Boston Globe's breakthrough Spotlight investigation of the early 2000s. But perhaps I couldn't fully face learning the names of the men in my own own parishes until I'd truly left the church for good. And sure enough, there he was.

Over the past weekend, the archdiocese of New York released a list containing the names of 120 men. In his accompanying statement, Cardinal Dolan said they were of "archdiocesan clergy found credibly accused of sexual abuse of a minor, or any clergy who were the subject of a claim, found eligible for compensation, made to the archdiocese’s Independent Reconciliation & Compensation Program." He also asked for "forgiveness again for the failings of those clergy and bishops who should have provided for the safety of our young people but instead betrayed the trust placed in them by God and by the faithful." None of the accused are currently in ministry.

Acknowledging the abuse of the past and setting a course to prevent it in the future is, I have no doubt, a painful task for the sincerely faithful trying to right decades of deep institutional wrongs. But there was also something a touch self-congratulatory in the communication too. The pastoral letter noted that "The Archdiocese of New York has vigorously implemented the requirements of the Charter and, in fact, has adopted policies that are above and beyond the Charter" and included specifics of "How We Have Helped Survivors of Abuse." Transparency is great, but maybe don't pat yourselves on the back too hard here, guys.

Seeing the New York list made me finally ready to look at my own. In a letter this past February, Newark Archbishop Cardinal James Tobin published 188 names of "diocesan clergy credibly accused of sexual abuse of minors in the Archdiocese of Newark," adding that "All names were previously reported to law enforcement agencies."

I scanned first for my childhood parish, the one I'd received my sacraments from, the one affiliated with my elementary school. I recognized one name, of a priest who'd joined the parish when I was in college and I saw a few times at holidays. Then I looked for the church where I'd been married. The information was clinically sangfroid. "Robert Chabak. Ordained: 1972. Permanently removed from ministry" after working in six parishes. "Multiple" victims.

I had wanted to get married in the prettier church with the big stained glass windows that made the nave glow photogenically. But Father Rich wasn't so sure about us. He'd blanched, as I'd known he would, when my fiancé and I wrote the same home address on our paperwork. Everybody had told me to lie, but I didn't want to start my marriage on dishonest grounds. So instead I sat in the rectory as the priest chain smoked through a lecture on morality, capped with an offer to officiate if we could move up the wedding date, "to avoid further sin."

We went to a different church. Smaller, darker. But we liked Father Bob, who shrugged off our residency status with no judgment. We took his pre cana classes, where he advised a roomful of couples on the foundations of successful Christian marriage. At the ceremony, he teased us gently about my control freak management of the biblical readings. He posed genially with us for pictures. Six weeks later we moved, and I never saw him again.

I now know that in 2004, Chabak was removed from ministry. As NJ.com reported in 2013, there had been  "sufficient information" to warrant the action following accusations that he'd molested a teenage boy over a three year period in the 1970s. The allegations fall outside of the legal statute of limitations, and Chabak has not been charged with any crime. BishopAccountability.org also notes that Chabak took a leave of absence for undisclosed reasons in 1989.

The 2013 news report also revealed another accusation. An Essex County attorney told Star-Ledger that in 1977, when he was 14, Chabak invited him and another altar boy away for a weekend. He alleged Chabak " tried to "initiate" him into the priest’s "club," telling him that "To be part of the club you had to strip down naked and run around while he photographed it." The paper reported, "Later that night, he said, he was sleeping on Chabak’s living room floor when he awoke to find the priest straddling him and trying to remove his shirt. The other teen, a 15-year-old, was holding his legs, participating in the attack." The accuser claimed he ran out and got away, eventually telling his story only to his mother and brother. "That moment was defining to me," the man said. "He ruined me."

It would be shocking enough that it took nearly 30 years and multiple parishes for something to be done about Chabak's alleged behavior. But the reason he became newsworthy nine years after he was removed was because he'd actually found his way a little bit back to the church. After 2012's Hurricane Sandy damaged his home, the archdiocese allowed him to stay in the rectory of St. Joseph Church in Oradell, out of what a spokesman for Archbishop John. J. Myers described as "a sense of compassion." It was not its first generous act toward Chabak — after he'd been permanently removed from the priesthood, he was still permitted to preside over his mother's and aunt's funerals.

After St. Joseph parishioners learned of his background, the archdiocese helpfully moved to Chabak to a retirement home for priests. (He later moved back to his own home.) But churchgoers claimed Chabak "repeatedly came back to St. Joseph to spend the night" even afterward. In July of 2013, St. Joseph's pastor, Rev. Thomas Iwanowski, resigned from his position there, telling reporters, "We tried to make a compassionate decision." He did not seem to have any words of a compassion for Chabak's alleged victims.

In a previous interview, Iwanowski brushed off Chabak's presence in the parish, saying, "He lived in the rectory and went to Mass every day. He didn’t do anything else. I don’t see the problem with that." He said Chabak's continued visits were likewise insignificant, adding, "He came for dinner. You have friends, don’t you? He simply came for dinner and visited a friend. Does it matter that he stayed over?"

"You have friends, don't you?" has got to be one of the most chillingly gutless things I've ever heard. You have friends who look away, don't you? Friends who welcome you to a new place when the whispers become too loud at your current one? Friends who protect you, even when you've been forced from your job over "credible" accusations of long term sexual abuse of a minor? It was that circle of friends who finally drove me from my lifelong relationship with the church last year. Because it wasn't just about the acts of the past. It was the present day attitudes and insensitivities that make it abundantly clear to me where the institution's moral compass still points — away from its own flock.

I almost never look at my wedding pictures. Several years after they were taken, my husband and I broke up. A few years later, to our surprise, we started a new relationship. But my wedding photos, like my old wedding ring, are souvenirs of a marriage that unquestionably failed. When I used to look at my bridal album, I'd mostly see two very young people very much in love and very much in over their heads. Now I see the man in the middle of it all, the priest I had turned to when another priest had called me a sinner. Blessing us. Blessing our children yet to come. Both the archdiocese of Newark and I now believe that man is a credibly accused sexual abuser. I look at the pictures, and I see everything I left behind. I see exactly why I left it.