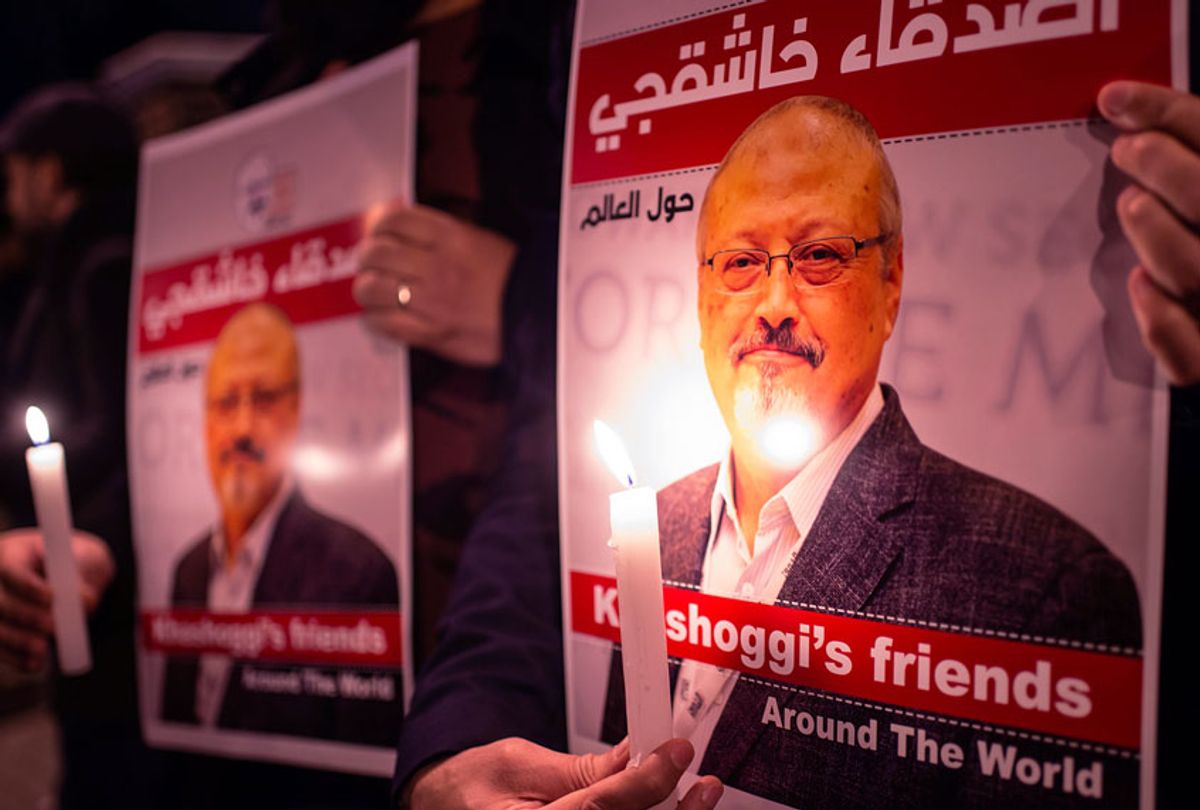 People hold posters picturing Saudi journalist Jamal Khashoggi and lightened candles during a gathering outside the Saudi Arabia consulate in Istanbul, on October 25, 2018. - Jamal Khashoggi, a Washington Post contributor, was killed on October 2, 2018 after a visit to the Saudi consulate in Istanbul to obtain paperwork before marrying his Turkish fiancee. (YASIN AKGUL/AFP via Getty Images)
--

Saudi Arabia's public prosecutor announced Monday that five people have been sentenced to death over the killing of journalist Jamal Khashoggi in the Saudi consulate in Istanbul last year. To many observers, this sentence seems calculated to shield Crown Prince Mohammed bin Salman from any responsibility for the murder.

The slaying of Khashoggi in October 2018 — and the kingdom's botched response — sparked international outcry and calls for accountability for those responsible. It led to greater scrutiny of a crackdown on perceived dissidents pursued by Crown Prince Mohammed. Khashoggi, a permanent U.S. resident who had contributed columns to The Washington Post, had been one of the crown prince's most outspoken critics.

Khashoggi was killed very shortly after he visited the Saudi consulate in Istanbul, seeking obtain documents that would allow him to remarry. A team of agents sent to Istanbul from Saudi Arabia murdered him and then dismembered his body, according to Turkish and Saudi prosecutors. Khashoggi's remains have not been found.

The verdicts came after a trial in Saudi Arabia that lasted nearly a year and was largely shrouded in secrecy, with court sessions closed to the general public.

Foreign diplomats who attended sessions of the trial were sworn to secrecy. Members of Khashoggi's family also attended, according to Shalaan al-Shalaan, a spokesman for the kingdom's public prosecutor.

In addition to the five people who sentenced to death, three others were sentenced to a total of 24 years in prison for covering up the crime and violating other laws. Though the kingdom did not name any of the convicted defendants, the two most senior officials implicated in the case, including an adviser to Crown Prince Mohammed, were found not guilty.

The CIA concluded last year that the crown prince had personally ordered Khashoggi's assassination, contradicting the kingdom's claims that he was not involved in the killing. In September, however, the crown prince for the first time accepted some responsibility for Khashoggi's death, saying, "It happened under my watch."

Saudi authorities had said they were examining the roles played by two senior aides to the crown prince in organizing and instructing the team of agents who killed Khashoggi. The kingdom said Monday that the two senior aides — Saud al-Qahtani and Ahmed al-Assiri — had been exonerated.

Qahtani, a top adviser to the crown prince and one of the kingdom's most ardent defenders, did not face trial. He was "investigated by the public prosecutor and was not charged because of lack of evidence against him," according to the kingdom's official statement.

Last year, the Trump administration imposed sanctions on 17 Saudi citizens, including Qahtani, over the killing. The administration said Qahtani was "part of the planning and execution of the operation that led to the killing of Mr. Khashoggi."

Assiri, the kingdom's former deputy head of intelligence, was initially charged after prosecutors said he had been responsible for ordering Khashoggi to return to Saudi Arabia. Shalaan said Monday that Assiri's guilt “was not proved."

Both men have been dismissed from their positions.

Turkish officials have insisted that Khashoggi was the victim of a brutal and premeditated killing, even as Saudi Arabia has maintained that the journalist's murder was a "rogue" operation carried out by overzealous subordinates who had been instructed to return him to Saudi Arabia alive. On Monday, Shalaan said the investigation revealed that "there was no prior intention to kill at the start of this mission." The killing, he added, was a "snap decision."

Other reports have indicated, however, that the Saudi team sent to Turkey included a forensic pathologist who carried with him the tools used to dismember Khashoggi's body.

Saudi officials have repeatedly called Khashoggi's killing a "tremendous mistake," citing the trial as evidence that they were responding to global outcry. Human rights advocates have argued that a fair trial is virtually impossible in the kingdom, an absolute monarchy where protests and political parties are banned and where the crown prince holds nearly absolute power.

A report in June by a UN investigator called for an international criminal investigation, saying that Saudi authorities participated in the destruction of evidence after Khashoggi was killed and that wrongdoing extended beyond the 11 people who were on trial. The investigator, Agnès Callamard, said Khashoggi's murder "constituted an extrajudicial killing for which the State of the Kingdom of Saudi Arabia is responsible."

Turkey said on Monday that the trial outcome did not serve justice and renewed its call for judicial cooperation with Saudi authorities, according to Reuters.

"The fact that important issues like the location of the late Khashoggi's body, the identification of the instigators and, if there are any, the local co-operators, are still in the dark is a fundamental shortcoming to justice being served and accountability," Foreign Ministry spokesman Hami Aksoy said in a statement.

The sentences announced on Monday are reportedly preliminary and subject to appeal.