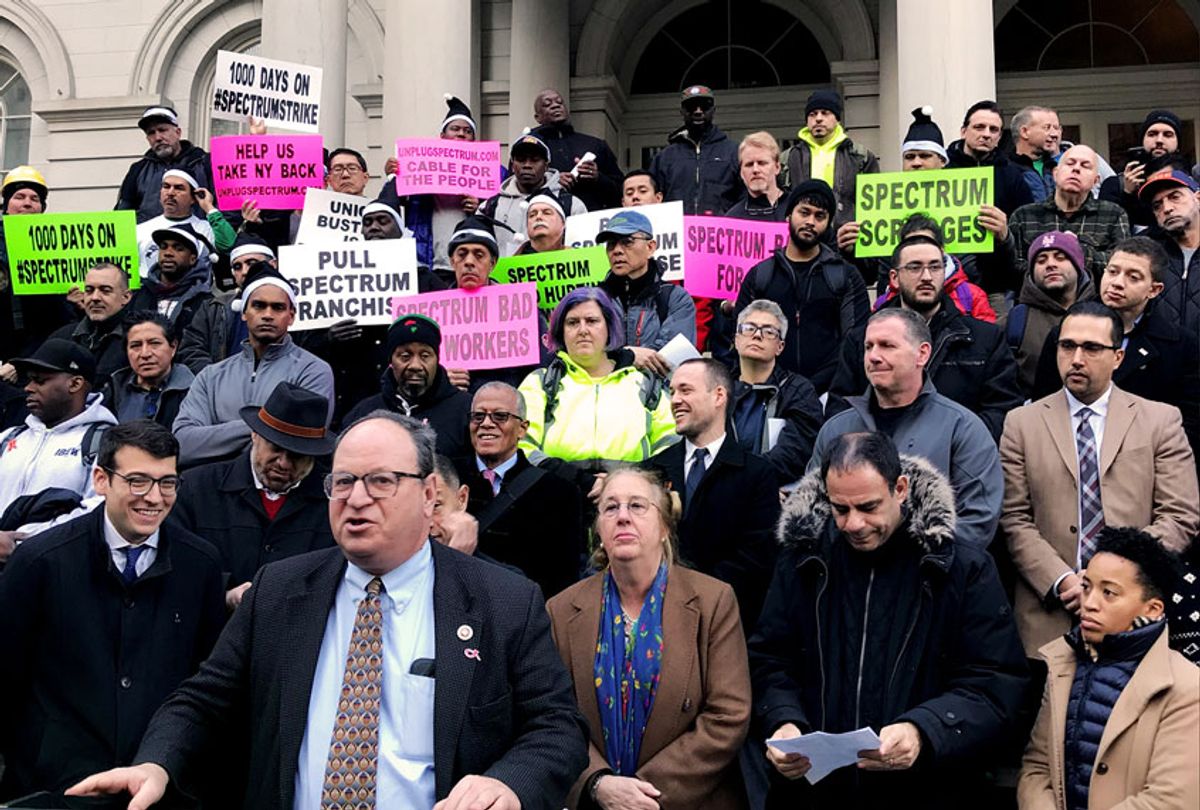 This article originally appeared on The Chief-Leader.

Members of the City Council are threatening to reject a renewal of Charter/Spectrum’s profitable municipal franchise agreement if the company does not sign a contract with 1,800 members of International Brotherhood of Electrical Workers Local 3 who have been on strike against the cable giant for nearly three years.

“Charter/Spectrum’s actions are a full-frontal attack on working men and women, not just here in New York City, not just here in New York State, but across the United States of America,” Council Member Barry Grodenchik declared at a boisterous rally on the steps of City Hall Dec. 23. “I am a member of the subcommittee that will vote on that contract, and I am standing here to tell you today that there is no way on God’s green earth that I am voting for a company that does not recognize the rights of its workers.”

In 2016 Charter/Spectrum merged with city cable-provider Time Warner, which had historically enjoyed good labor relations with Local 3. Charter/Spectrum has taken a hard line with Local 3 and is pressing to de-certify the union, one of the oldest in the city. The company is the nation’s fastest-growing TV, internet and voice company, with 28 million customers in 41 states.

Elected officials and union organizers pointed to Chattanooga, Tennessee, the first city in the U.S. to install a public-owned community-wide fiber-optic network in 2010, as an alternative model to Charter/Spectrum.

That network is up to 1,000 times faster than what most users have in the U.S. The public-internet-utility model has gotten traction across the country, with 800 communities opting for a municipally owned network, according to the Institute for Local Self Reliance

In an interview after the event, Local 3 rally organizer Troy Walcott said the rally, which included three spirited parody Christmas carols, was called to boost the morale of the strikers.

“Our members are losing stuff every day,” he said. “Foreclosures are coming up, medical bills, savings for college educations are gone. Savings are gone, and when we have such a media blackout on us — nobody in the media is saying anything — it seems like there’s nowhere to go. So coming here today to see so much support might help lift some folks up.”

“Christmas in July is coming when we are going to have a chance next July, because Charter/Spectrum has been on the naughty list for a long time now and we know who they are,” said Council Member Costa Constantinides, who sits on the Zoning and Franchises Committee. “It’s about creating the public option. It is about re-empowering workers, and in July, we are going to throw them off the franchise.”

“A thousand days of injustice, a thousand days of unfairness, a thousand days of disrespect,” said Council Member Rory Lancman. “Men and women who live in my district are struggling to put food on the table, to clothe their children, to participate in life just like we do are now facing their third Christmas with insecurity, withouy a job, without income, and it’s not that the city does not have leverage to force Charter/Spectrum to do the right thing.”

Mr. Lancman told the crowd that the duration of the strike reflected badly on the city, long considered the nation’s staunchest “union town.”

A request for comment got no response from the Mayor’s Press Office.

Mayor de Blasio has championed the Local 3 cause, respecting the union’s picket line when it was present outside Charter/Spectrum’s NY1 Chelsea Market studios, and even raised the issue on NY1 during one of his weekly appearances on “Inside City Hall.”

“Spectrum’s diverse and skilled technicians have been delivering great service to more than 1 million New York City customers,” said Charter/Spectrum in a statement. “We are committed to providing our 11,000 New York employees with highly competitive wages, excellent health-care and retirement benefits, and training and career-growth opportunities.”

In 2018, then-State Attorney General Barbara Underwood settled a consumer-fraud lawsuit for $174.2 million with the cable giant for defrauding internet consumers.

In 2019, the state Public Service Commission reached a settlement regarding the company’s bid to expand its network of high-speed broadband service to 145,000 homes and businesses in Upstate New York, requiring it to spend more than $600 million.

In October 2018, during his re-election campaign, Governor Cuomo met with both sides and appointed Peter Ward, president of the Hotel and Motel Trades Council, to mediate.

That December, in a massive rally in front of the company’s Manhattan headquarters, a diverse coalition of public- and private-sector unions turned out thousands of union members and supporters.

Vincent Alvarez, president of the AFL-CIO New York City Central Labor Council, told that crowd that because the city had the highest percentage of organized workers in the country — roughly 25 percent — the entire labor movement had a big stake in the Local 3 strike.

“Because if certain things can happen here in New York City, it’s a problem for every working person throughout this country,” he warned. “Charter Spectrum makes millions of dollars. They have a CEO who makes $300,000 each and every single day of the year, and they can’t pay the hard-earned benefits and wages that you have earned."

Charter/Spectrum’s absorption of Time Warner and Bright House Networks in the 2016 merger approved by the Federal Communications Commission came over the objections of a broad coalition of social-justice, consumer and internet-access advocacy groups.

To bring the deal to fruition, the company assumed more than $60 billion in debt. In 2016, CEO Thomas Rutledge received close to $100 million in compensation and stock options.