A new generational conflict: Will the 2020s be the "OK boomer" decade? 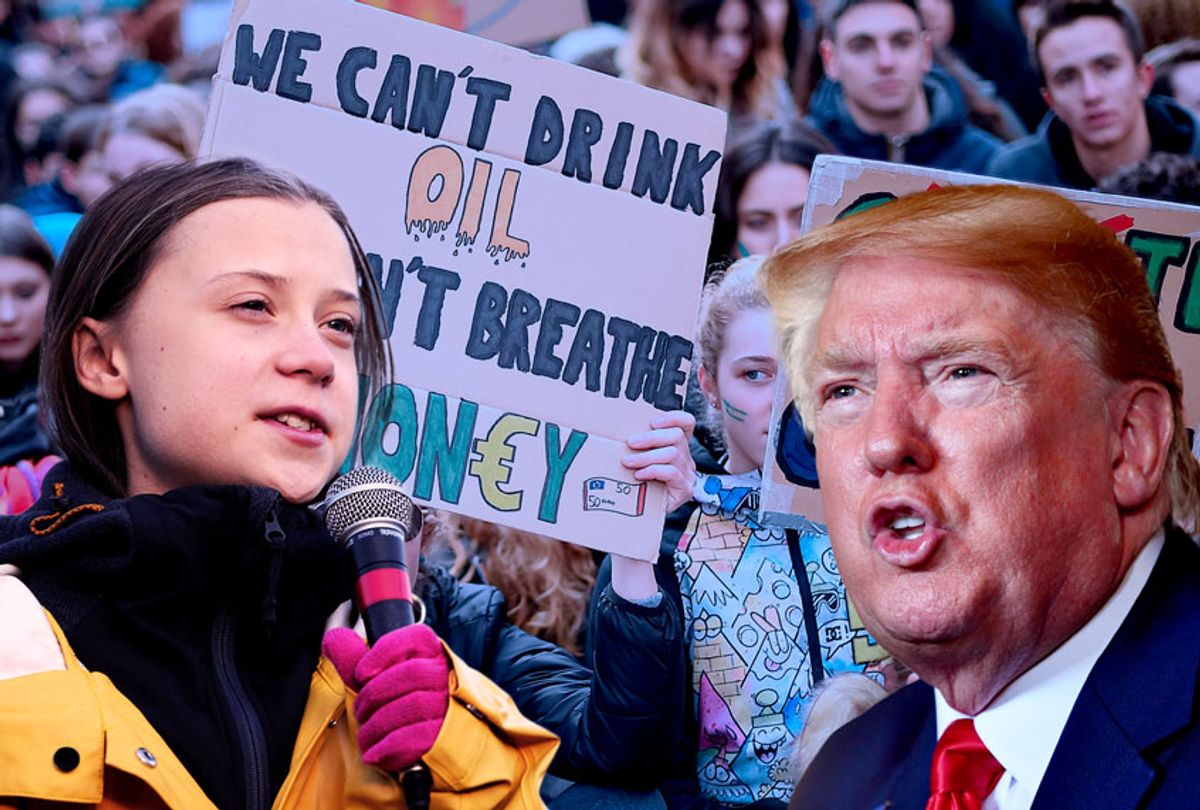 Once the New York Times reports on a trend, it's already over: That's a cliché that's older than most of the people spouting it. And yet that truism was inverted in October 2019, when a Times trend piece took what was up till then a minor bit of online ephemera and catapulted it into a major cultural phenomenon.

"‘OK Boomer’ Marks the End of Friendly Generational Relations," read the headline. Below was a story about how this youth-trendy phrase aimed at the Me Generation captured a deep sense of anger aimed at older generations who stuck their kids and grandkids with out-of-control climate change, a spiraling cost of living, and constricted economic opportunity.

That article immediately went viral, coasting on an explosion of outrage from boomers themselves. No, not outrage over the "[r]ising inequality, unaffordable college tuition, political polarization exacerbated by the internet, and the climate crisis," but because these little punks are so ungrateful.

That narcissistic response, in turn, shifted "OK boomer" from a minor trend to a major cultural touchstone. By freaking out about their wounded egos, rather than pondering why young people are suffering so much, boomers the internet over justified the widespread perception that their generation is ruled by the blinkered, selfish attitudes implied in this simple little phrase.

Going into 2020, I predict that these questions of age, power and who gets to decide what the future looks like will become only more profound. Conservative older generations will dig into their anger and resentment even more, and younger generations will become even more worried about what kind of future awaits them after their elders are done wrecking both America and the entire planet.

This is the point of the article where boomers in the audience are already composing angry emails and social media missives, demanding acknowledgement that they, personally, are good liberals who hold excellent opinions on everything from student loan debt to gun safety to fighting the climate crisis.

But that response is why this intergenerational conflict will only get worse, not better. The personal virtue of individual boomers is a very interesting subject to the Me Generation, but it does little or nothing to address the systematic problems that are leaving young people afraid, for good reason, about their futures.

Despite the supposedly healthy economy we are enjoying right now, millennials and members of Generation Z are not getting anything like their share of the alleged American prosperity. As a report by CBS News in November demonstrated, even though millennials are a full quarter of the population, they "own a scant 3% of the country's wealth." By comparison when boomers were roughly the age millennials are now, "they controlled 21% of all national wealth," even though the two generational slices are about the same size. Millennials also have more debt, higher housing costs and lower wages than previous generations.

Generation Z  — meaning those born in the mid-1990s or later — is looking down the barrel of similar problems. Tuition and housing costs don't seem to be going down, and salaries for young people continue to be squeezed by declining union membership and the apparently endless expansion of the "gig economy."

In the face of this, mental health problems among young people are, unsurprisingly, rising. Over the past decade, the rate of depression, suicidal ideation and psychological distress in teens and young adults has climbed dramatically. Nearly 10% of teens suffer a major depressive episode every year, and the majority don't get treatment.

Add to this the looming climate crisis, which presents a threat to all of human civilization and the survival of the planet, and no wonder young people feel screwed.

But the main reason kids feel this way goes straight back to economic insecurity. Pew Research findings suggest that kids are stressed because of academic pressures, more than anything else. Which makes sense: They understand that they're growing up in a society where their economic opportunities will be limited compared to what their parents and grandparents got, and they feel reasonable fear that if they fall behind in the rat race now, they'll never catch up.

Similarly, the millennial cohort — who now range from roughly their early 20s through their late 30s — also suffer from staggering levels of anxiety and other mental health issues. Millennials are five times more likely to have left a job because of mental health reasons than boomers are. The double hit of high anxiety and job insecurity makes statistics like that inevitable.

It's easy enough to see why younger people feel screwed by boomers in particular — because, collectively speaking, it's pretty much their fault.

Boomers have controlled the government for decades — the past four presidents have been boomers (even if Barack Obama struck many people as more a Gen-X type). What did they do during those decades in power? They reduced public investment in almost everything, especially in education. They avoided dealing with climate change in any meaningful way, despite knowing about the evidence since the 1970s and being regularly warned by "good boomers" like Al Gore and a bevy of scientists.

Now that all these forces are coming to a head and creating increasing desperation among younger generations, boomers (or at least a majority of them) went to the polls in 2016 and chose Donald Trump, even as millennials and the leading edge of  Generation Z overwhelmingly favored Hillary Clinton.

It's hard to imagine a bigger F-you to younger people than that —electing a man who does not hide his contempt for democracy, or his desire to destroy it. How better to continue sticking the screws to the younger generations than undermining the democratic systems they need to save themselves?

Boomers grew up in a nation where progressive policies meant they had low college tuition, affordable housing, robust retirement accounts and a government that actually cleaned up the environment when duty called — and then the majority turned around and said, "See ya, suckers" when it came to their own offspring. Research shows that boomers largely enjoyed the relative liberalism of their youths, and then, broadly speaking, turned more conservative as they grew older.

It's no wonder, then, that the last portion of the the 2010s was marked by kids, meaning actual underage minors, realizing that older generations were never going to take responsibility for the future, and that the kids would have to save themselves.

First there was the Parkland, Florida, shooting, which led to an outpouring of youth activism demanding gun safety regulations and calling out older people — who are far less likely to get shot — for choosing the NRA and its BS definition of the Second Amendment over the literal safety of their children.

This year saw the climate strike movement, as young people from around the world, inspired by Swedish teenager Greta Thunberg, hit the streets to demand that adults actually show the love they claim to feel for children by actually doing something to save the planet for them.

Perhaps the best part about this youth activist movement is that it seems remarkably resistant to efforts from older people to use the typical tools to tame rebellious youth: Shame, intimidation, condescension and co-option.

In her blistering speech before the United Nations earlier this year, Thunberg called out these attempts to contain her, specifically those who would condescend to her or try to co-opt her as a mascot while not actually taking her call to action seriously.

"You say you hear us and that you understand the urgency. But no matter how sad and angry I am, I do not want to believe that. Because if you really understood the situation and still kept on failing to act, then you would be evil. And that I refuse to believe," she said.

She ended with a warning: "And change is coming, whether you like it or not."

Her speech was a thorough articulation of the sentiment captured by "OK boomer": Young people can see the laziness, selfishness and condescension their elders. And they are done with it.

As depressing as this conflict is, the kids themselves are a beacon of hope. I went to the climate strike in Philadelphia, where I live, and the experience of it was only comparable, in spirit, to the Women's March in Washington the day after Trump's inauguration. These kids had came together in their grief and anger at older generations who had brought them into being without caring for them enough to ensure they would inherit a healthy planet. But in being together, they found joy. Community, really being seen by others who share your fears and hopes, is a great palliative to the cloud of despair that hovers over so many younger people.

As a member of Generation X (those born between the mid-'60s and early '80s), I feel like something of an outsider to this tug-of-war between the boomers who squandered our nation's future and the younger generations who are trying to take it back.

My generation was complaining about being screwed over by boomers before most of these young people were born. No one much cares about us — we are much smaller in number than the other generational cohorts — so it never really mattered. But we also can't claim we did much to stop the bleeding: We didn't have the power, and I'm sorry to say that most of us didn't have the will.

Being outside the struggle is a gift, in the sense that it grants some measure of objectivity. I don't officially have a dog in this fight, but I know who I'm rooting for. Younger generations have been done dirty, and frankly, they are being nicer about it than they had to be. Considering what their elders have dumped on them to deal with, a snarky internet meme is letting the boomers off pretty damn easy.