Tulsi Gabbard: Impeachment "increased the likelihood that Donald Trump will remain the president" 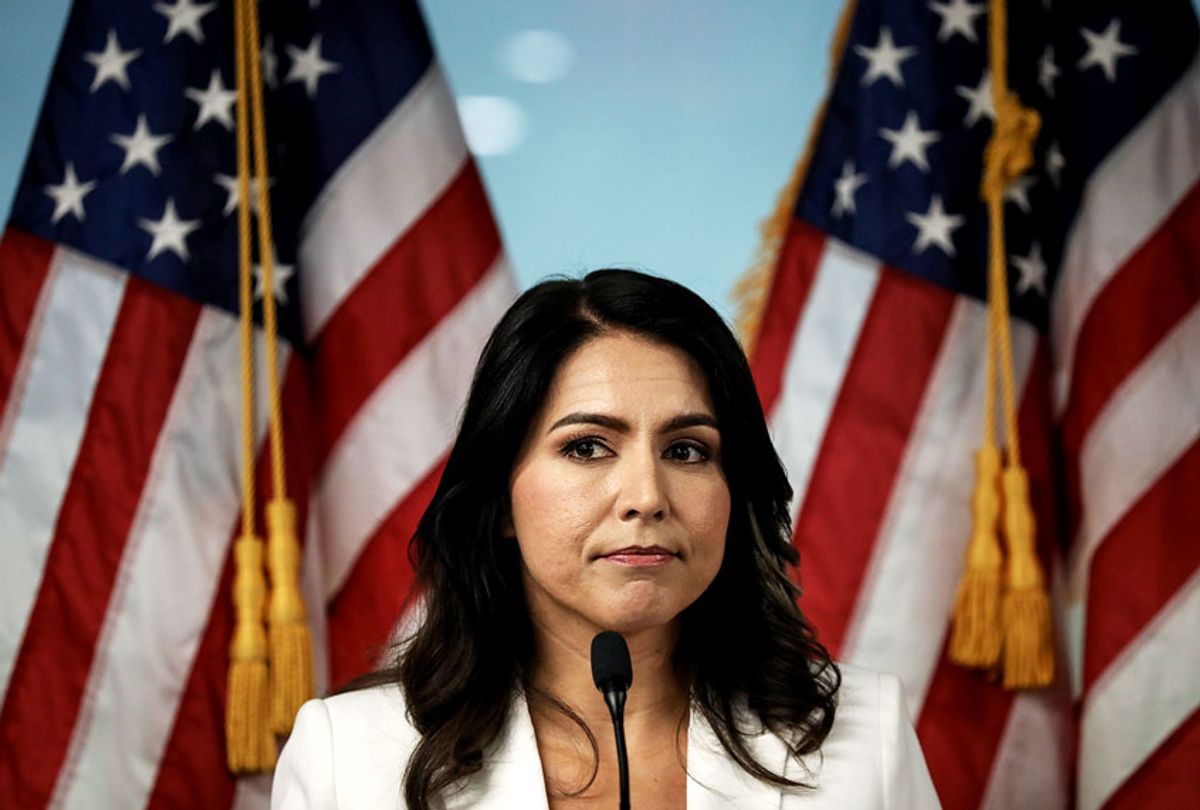 Democratic presidential candidate Rep. Tulsi Gabbard (D-HI) speaks during a press conference at the 9/11 Tribute Museum in Lower Manhattan on October 29, 2019 in New York City. Gabbard called for the U.S. Department of Justice and the FBI declassify and release 9/11 investigative documents that she claims would implicate the Kingdom of Saudi Arabia in the 2001 terrorist attacks. (Drew Angerer/Getty Images)
--

Tulsi Gabbard, the Hawaiian congresswoman vying for the Democratic presidential nomination in 2020, has claimed that the recent impeachment of President Donald Trump will aid his re-election.

“In 2020, we will have a new president in the White House. But the real question is: How many of you do not want that to be Donald Trump?” Gabbard asked a video posted to Twitter. “I definitely don’t, but unfortunately the House impeachment of the president has greatly increased the likelihood that Donald Trump will remain the president for the next five years.”

"We all know that Trump is not going to be found guilty and removed from office by the U.S. Senate. It’s not going to happen," Gabbard continued. "Second, the impeachment, in my view, will actually increase his support amongst voters. And it’s going to make him harder to defeat.”

As a result, Gabbard predicted that Republicans would take over the House of Representatives and control both houses of Congress along with the White House until 2024.

The Hawaii legislator has faced considerable public scrutiny ever since she decided against weighing in on Trump’s impeachment earlier this month. Instead of voting either “yay” or “nay,” Gabbard simply voted “present."

Her choice which prompted former Democratic Sen. Claire McCaskill of Missouri to comment, “That’s just stupid. I mean, what is the point? I don’t know what this woman thinks she’s accomplishing by that. I guess getting attention. We’re talking about her, and really we shouldn’t spend any time talking about her."

"And to not take a stand one way or another on a day of such great consequence to this country, I think, is quite difficult," she continued.

In a statement released after her decision to vote “present,” Gabbard said: "I am standing in the center and have decided to vote present, because I could not in good conscience vote against impeachment because I believe President Trump is guilty of wrongdoing."

The congresswoman foreshadowed her taped remarks when speaking to an ABC News reporter on Saturday.

"I think impeachment, unfortunately, will only further embolden Donald Trump, increase his support and the likelihood that he'll have a better shot at getting elected, while also seeing the likelihood that the House will lose a lot of seats to Republicans," she said at the time.

Gabbard also insisted that her vote was "not a decision of neutrality" and that "thinking about what's politically advantageous, whether for me or for my party, does not enter into my mind around these decisions that have really great consequence."

In addition to her handling of impeachment, Gabbard has also been criticized for having a seemingly cozy relationship with Syrian dictator Bashar al-Assad and for taking positions, which have been characterized as pro-Russia. Former Democratic presidential nominee Hillary Clinton described Gabbard as “the favorite of the Russians,” prompting Gabbard to reply that Clinton was an “embodiment of corruption” and “queen of the warmongers.”