"The Witcher" and "The Mandalorian," heroes of the gig economy 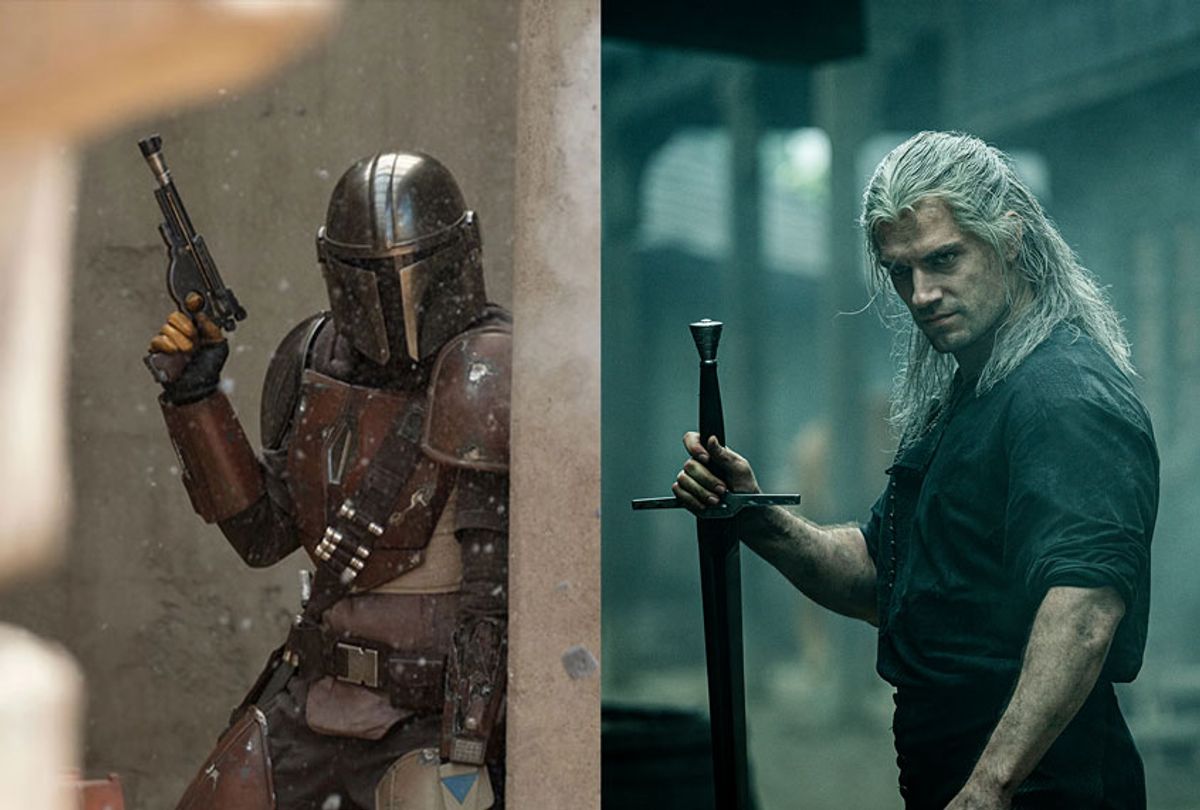 Watch “The Witcher” and sooner or later its unofficial theme song “Toss a Coin to Your Witcher” worms its way into your brain. This statement is based upon experience but also plenty of anecdotal reports, which we shouldn’t knock; they’re about as reliable as Netflix’s unverified and somewhat dubious declaration that “The Witcher” ranks sixth on its list of most popular titles of 2019, and is its second most-popular series of last year behind “Stranger Things 3.”

For now, back to the song: Written by Sonya Belousova and Giona Ostinelli and sung by series co-star Joey Batey, the “Toss a Coin” melody makes its first appearance in the second episode and recurs throughout the season.

The song is an embroidered retelling of an encounter between monster hunter for hire Geralt of Rivia, played by Henry Cavill, and the pack of elves who ambush him and the bard Jaskier (Joey Batey). Its lyrical substance doesn’t really matter, because the refrain is where the real magic lies:

Toss a coin to your Witcher, a friend of humanity!”

To any participant in the gig economy or staff in businesses precariously adjacent to it, “Toss a Coin to Your Witcher” has the makings of an unofficial anthem. And in these days of wage stagnation and a widening wealth gap, lots of folks can relate to that chorus.

People who love “The Witcher” and the TV season’s other massive streaming series blockbuster “The Mandalorian” relate to Geralt of Rivia and Disney Plus’ taciturn Mando (Pedro Pascal, helmeted for an entire season) for a long and varied list of reasons. Among them is the role that each hero plays in vicariously representing an ideal version of who we are or who we wish to be.

That appeal explains our core attraction to fantasy and science fiction heroes in general, but the title characters of “The Witcher” and “The Mandalorian” stand for something different than, say, Marvel’s Avengers or the Justice League or even the mythically wise and spiritual Jedi Council.

Neither Geralt nor “The Mandalorian" bounty hunter Din Djarin have a safety net to fall back on. Neither man is associated with an organization backed by private wealth or government funding. Neither man has family to fall back on, or family at all. Instead they are lone wolves, heroes who have a reputation for being among the best at what they do but call no place home.

All they have is their skill, their rides (Geralt has his faithful horse Roach, while The Mandalorian relies on the extraordinary ship known as the Razor Crest),and their reliance on the desperate need of strangers who can pay their fee.

Granted, “The Witcher” and “The Mandalorian” aren’t the first series featuring heroes for hire. “Marvel’s Luke Cage,” beat them to that punch a few seasons ago, as did “Marvel’s Jessica Jones.” But while making ends meet is a serious concern in those series, the drive to earn feels less prominent in their narratives than it does in these current hits.

But maybe we’re noticing it more right now because work and labor are among the top stories of the moment.

According to the Bureau of Labor Statistics some 16 million Americans describe themselves as self-employed. Add in the numbers of people who work for them, and you’re talking about a sizable number of folks who contract out their skills. And if you’ve been exposed to this viral tune, its appeal needs little explanation. Easy to recall and built around an uplifting message of heroic toil and reward, it’s an inspiring whistle-while-you-work ditty.

Also, 2019 was a year in which labor unions scored significant wins, with union membership growing among digitally based news organizations. The Writers Guild of America East, (of which Salon’s writers are members) has seen its numbers expand by 40 percent over the last five years. The National Writers Union announced a division created specifically for freelance media workers called the Freelance Solidarity Project.

Meanwhile the AFL-CIO secured stronger labor protections in the new trade agreement with Canada and Mexico. However, and you had to know one of those was coming, 2020 is expected to bring more rollbacks to the previous administration’s policies that eased the path of unions to organize.

Taking all of this into account, it’s no wonder “Toss a Coin to Your Witcher” has racked up millions of streams on YouTube, with 4,182,395 views – and counting – on this unofficial post alone. Art and media can be insightful culture and social bellwethers sometimes, whether intentionally or accidentally. The composers made it available on their SoundCloud account, where it’s been played more than 661,000 time. There's even a remix . . .  because the Internet. As to why on Earth Netflix didn’t plan to monetize and distribute the soundtrack as soon as “The Witcher” dropped on Dec. 20, who knows?

In the same way that the song is sweeping across our lands, Jaskier’s medieval banger catches on in taverns and castle halls across its realms, from the Far North to the Nilfgaardian Empire in the South. To guarantee its notes are inescapable the series’ score reprises the main melody at appropriate points throughout the season.

In an interview with Men's Health, Batey, who lends his voice to "Toss a Coin," admits that it's "the most annoying thing I've ever heard."  Belousova and Ostinelli's lyrics aren’t exactly gunning for the Pulitzer committee’s attention; “He thrust every elf/Far back on the shelf” is  . . .not great, bard.

Still, that refrain is easily adaptable to anyone grinding away for tips: “Toss a coin to your waiter, o valley of plenty” works just as well, and frankly I’m amazed that every ride share driver isn’t playing it on a loop to cue their customers to leave them a little extra something along with a five-star rating.

Equally as important to consider, though, is the context in which it plays, such as an opening scene in the fourth episode. Jaskier sits in a tavern, writing down an eyewitness account of what the peasant telling the tale believes to be Geralt’s horrible death. "Swallowed whole by a gigantic beast," he says to the rapt audience hanging on each word.

A beat after that, our Witcher strolls through the door covered head to toe in beast guts. Had to get the monster from the inside he explains, plainspoken as an exterminator, adding, “I’ll take what I’m owed.”

Geralt’s missions are dirty, dangerous, and – save for what he’s paid – thankless. Rarely, if ever, does he work for free, even though a number of people posting missions may expect him to. As such he’s as likely to take on assignments from ne’er-do-wells as he is from the downtrodden.

He may have a strong moral code, but he also has upkeep costs: a horse, weapons, and armor that sustain damage, medical bills. Valorous acts may lend themselves to epic song, but karaoke dedications will not keep a Witcher fed or purchase his lodging. The rent is always due.

We can relate in a similar fashion to the title hero of Disney Plus’ “The Mandalorian,” currently listed as the second most in-demand TV series in the world across all platforms behind “The Witcher” according to the data company Parrot Analytics. (Parrot determines its rankings based on "demand expressions," its globally standardized TV measurement unit to reflect the desire, engagement, and viewership of a series, weighted by importance.)

Admittedly Pascal’s space cowboy has other considerations working his favor, too. From the moment we meet Mando, he appears to be defending a gentle, helpless guy in a bar from thugs. But he’s only clearing the way to his quarry. A few scenes later The Mandalorian encases the bounty in carbonite, where he hangs with other frozen figures.

The same episode reveals that The Mandalorian is a member of a bounty hunter guild that can no longer command rates that keep up with the cost of living. Freelance hunters are devaluing their work, and none of the available jobs pay enough for him to buy fuel. So he takes an under-the-table assignment from evil men, which in turn, leads him to The Child; aka Baby Yoda, Tiny God of Memes; aka your reason for waking up on Fridays in November and December.

A primary explanation of the worldwide successes enjoyed by “The Mandalorian” and “The Witcher” is brand familiarity. By now you’ve probably read the many stories heralding the high value corporations such as Disney and Netflix place on locking down or taking advantage of existing I.P., or intellectual property. In essence, they are gambling on popular characters and stories to capitalize on our deeply seated love of them. Even critically unsatisfying Force-associated properties make money for George Lucas and the House of Mouse. Some simply yield higher profits than others.

Our reaction to “The Mandalorian” is on a different level than our anticipation for other “Star Wars” spinoffs, and some of that has to do with the hero’s profile: he is an orphan of war who rose from nothing and earns every bit of what he has. Baby Yoda does not require much of a sales pitch, but to simply toss that creature’s fate in with an unknown who hails from the same people as the legendary Boba Fett doesn’t necessarily guarantee success.

That requires seeing something of ourselves in that gunslinger. Never mind that we barely saw Pascal's telegenic mug. Fact is, Americans likely relate to him because our national identity is more enmeshed with cowboy stories than Jedi philosophy, and the Mandalorian’s ethics system is decidedly more Western than Eastern.

Ditto for Geralt of Rivia and “The Witcher,” based on a series of fantasy novels the Polish author Andrzej Sapkowski that have already been adapted into a blockbuster video game series, comic books, and a less successful European TV series. Geralt, aka the White Wolf, has brethren, but they’re scattered throughout the continent, and among the last of a fading breed of magical men.

But do not discount the economic relatability of these characters in a culture saturated by supermen and wonder women supported by wealth, royal rank or even a well-organized interplanetary resistance. The average viewers has Batmobile dreams and lives within the reality of a Chevy budget.

Singing, however, is free. Now we have one to call our own and adventuresome working heroes to inspire us. So this weekend, when you’re stuck under piles of thankless chores or burrowing into that extra work the boss dropped on you Friday afternoon just put your lips together, and hum your theme song’s plea to the valley of plenty. It helps to be reminded that there’s a little Witcher and Mandalorian in all of us, rough and ready to work for what we’re owed.