A decade closer to apocalypse: Looking back at the mayhem of the 2010s

Yes, the planet is dying — but so are liberal democracy and human consciousness. Which is worse? Take your pick 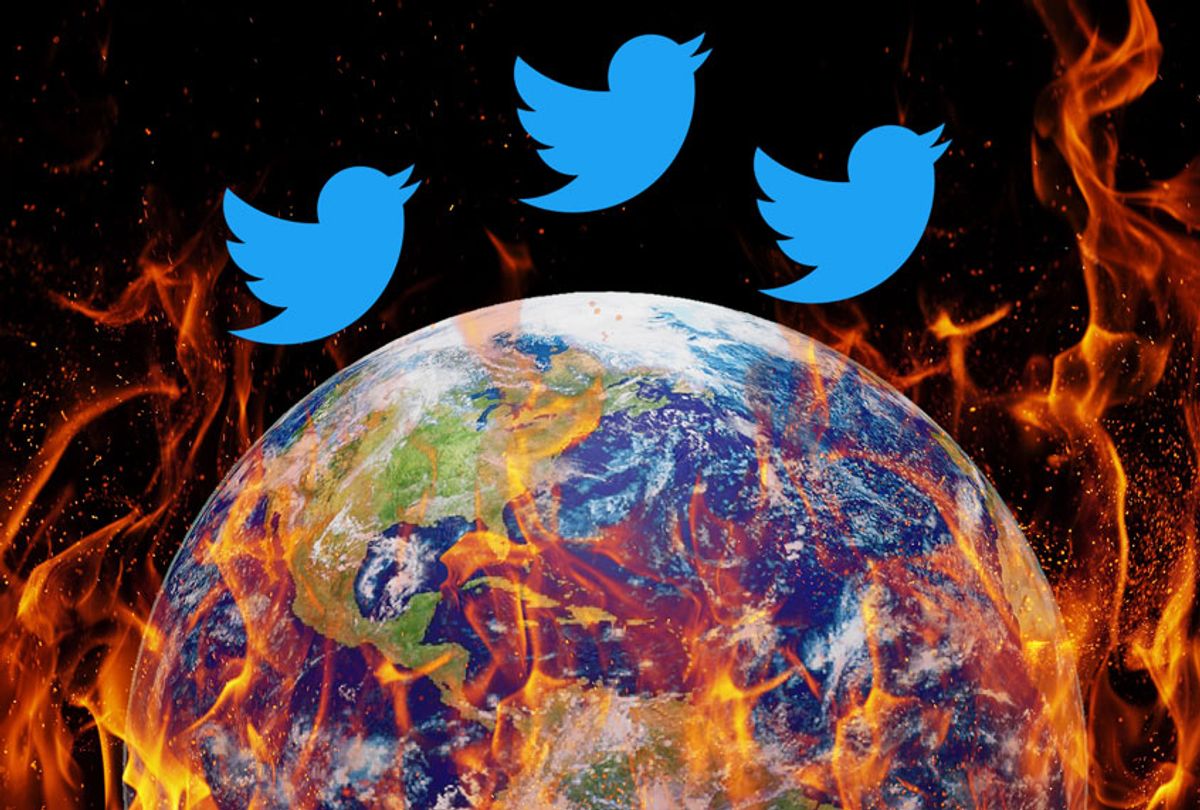 The world is on fire, but Twitter carries on (Getty Images/Twitter/Salon)
--

No, I do not mean climate change, though that too — or, more generally, ecological collapse, since I hate reducing the nature of the ecological challenge to the words “climate change,” which are simultaneously reductive and fatalistic, and at the same time weirdly exculpatory. And by looking at it in abstraction from the human actions which beckon the catastrophe, one avoids its true meaning altogether.

What did we get much closer to then, in the time period from 2010 to 2019? Most worrying to me, a flattening of human consciousness. People everywhere, because capitalist globalization goes on unchecked, speak a simpler language, shun centuries or millennia of cultural tradition, live in a Twitter-vacuum of the moment, echoing platformed thoughts, imbibing the latest hypocrisy dressed as outrage, sounding like everyone else even when they do resort to speaking their native languages. The same limited cultural producers, dramatically declining in range and number (in the U.S. we seem to be down to just about one worthy newspaper, the New York Times), offering the same vacant thoughts. The dream of cultural uniformity, and therefore cultural annihilation, is much closer than it was 10 years ago. That’s a big change, and for me the most notable one.

Technology has pushed this along, this flattening of human culture, just as it has taken huge steps forward in annihilating privacy and autonomy. I’ve been rereading for the last few years the classics of golden-age science fiction, and one thing that almost everyone — Isaac Asimov, Clifford Simak, Arthur C. Clarke, Algis Budrys, Frederik Pohl and C.M. Kornbluth (as a duo), Alfred Bester, Theodore Sturgeon, A.E. van Vogt and others — missed is the power of technology to track and control us at the mundane level. Nearly all the plots of classic science fiction seem irrelevant now in the face of technology that makes day-to-day elusiveness impossible. That was the one big thing — unlike, say, nuclear power — those writers almost completely overlooked. Their minds, even when writing about millennia into the future, couldn’t grasp the scale of technological control that was actually just around the corner.

Certain facile conclusions are possible about where we have been and where we’re headed. If you look at the rise of Occupy and before that the Tea Party, and more recently Trumpism, Brexit and millennial-style democratic socialism, it seems easy to conclude that the days of conventional neoliberal economics are over. In this prism, populism — whether of a Narendra Modi or a Donald Trump — is resurgent, in opposition to neoliberalism’s reduction of the human being to globally tradable commodity, with all the uniqueness of culture, tradition, ideology, philosophy, art and literature stripped away. But if you consider neoliberalism as being enfolded within capitalism, as being a variant rather than a substitute of the higher power, then the protest movements of the last decade, both on the left and right, seem relatively impotent. Because they are not yet aiming at the real enemy — no, not even American democratic socialism, it seems to me.

Power, in fact, has filtered to certain overlords in the technological world, the Jeff Bezoses and Mark Zuckerbergs of the world having consolidated infinitely more ability to dictate patterns of thought and behavior than anyone would have thought possible at the start of the last decade. They have faced very little resistance: The Russiagate attack on Facebook is fraught with doublespeak, with the “liberal” side exposing its hypocrisy with respect to what has been derisively relabeled the “deep state” — and used to be called the military-industrial complex by respectable dissidents — because they stand in symbiotic relationship with the populist masses who have voluntarily delegated this power upward to them. As long as they can preen and posture, to the delight of their own minute cults, the quiet relinquishment of power and the voluntary erasure of privacy seem to be a price worth paying.

The movie "Idiocracy" once seemed like a wild exaggeration, despite the patent idiocy of George Bush the younger, during whose peak era the movie was made. Now, at the end of this decade, Mike Judge's film seems to have been under-boiled, a fainthearted effort at capturing the kind of dumbness the population at large would come to embody. The populist leader in "Idiocracy" seems almost enlightened compared to the actual reality today.

The last decade consolidated the illiberal trends of the decade that preceded it — the one that gave the world the war on terror, and the assorted bureaucratic tools to separate wanted and unwanted people, many of those instruments unprecedented in scope and power. Thus we remain on the linear trend of the gradual dissolution of empire that began as soon as the Soviet Union disintegrated and really took off at the turn of the millennium. Twenty years have gone by, and another 30 or so remain before this saga is all wrapped up.

For the coming decade, certain obvious predictions are in order. An economic collapse, since the fundamental skew toward debt and leverage was never addressed — and can’t be, within the straitjacket American capitalism has forced itself into — which will usher in a stronger wave of austerity, reaction, xenophobia and social Darwinism than was the case in the wake of the last economic crash. And continued political fragmentation, which won’t be anything new, but will be orders of magnitude greater than anything we experienced in the previous decade.

Ten years ago, most large American cities (except for New York and San Francisco, most prominently) were still affordable to large numbers of people. If you go to Los Angeles today, you would never dare to make such an assertion. The crisis of affordability, whereby perfectly good housing that could accommodate normal people has been converted into empty financial space controlled from a distance by oligarchies that refuse to be named, has infected every American city. It does not stem from independent forces, but works in perfect correlation with the new technological prowess to separate the wanted from the unwanted.

I’m sorry, but democratic socialism as it is being marketed now, and which is successfully recruiting large numbers of millennial followers, was suitable for 1990. It is not suitable for 2020. It can’t even begin to address the social pathologies engendered by the last 30 years of unchecked capitalism. Most evidently, it can’t even bring into the ideological fold more than half the voting population, who will fight it tooth and nail, to their own death if necessary, precisely because it promises the kind of love and compassion for which they see no place in public life, except as a form of unwanted weakness.

This linear progression toward absolute chaos and division and fragmentation and quarantine and erasure has become all too predictable. It used to be that Hollywood loved to destroy Manhattan, the ultimate nerve center of empire, over and over again, as an act of love: To declare total fealty to America is to wish to demolish it at its liveliest core, it seems. The era of such movies has passed, their peak being the 1990s, and to a lesser extent the 2000s, both more transitional decades than the one that has just ended. Manhattan is already hollow, cured, pacified, irrelevant, silent, gored at its core. There is no need for Hollywood to step in with its short-order apocalypses.

At the end of the decade, after 10 years that were remarkably free of memorable movies and literature, came two of the best ever. I found Martin Scorsese’s "The Irishman" as compelling as any American movie I’ve ever seen, and his edgy refusal to go quietly into the sunset, as he faces his own mortality, is a testament to his will to tell the truth. The mob is America. It is not a subculture or a split from the mainstream, it is the very essence of America. The small hoodlum (I just rewatched "Mean Streets" from 1973, the first Robert De Niro and Scorsese collaboration) becomes the big hoodlum almost without note, which is what we call America. The sense of wrapping up, of imminent farewell, transcends Scorsese’s personal alarm toward mortality, and is rather a postulate that all of our lives, during these hyper-capitalist last few decades, have been in vain. There is not even sorrow or apology or penance to be had, as is embodied in De Niro’s luminous characterization.

And the novel that spoke to me most resonantly about this exact same dread — this fear of an opportunity for reclamation that went by in a moment’s glimpse before it was even adequately grasped — was "Quichotte," Salman Rushdie’s best novel since "Midnight’s Children," published almost four decades ago, just a couple of years after the ayatollahs seized Iran and set in motion furies that still haven’t subsided. "Quichotte" has a lot in common with "The Irishman," and I encourage readers to look at how far advanced the superficial Hollywood project of annihilating America has become in these trustworthy hands, a giant of filmmaking on the one hand, and of literature on the other hand. The myth of America, in "Quichotte," is fully encompassed, which is the only reason why alternative (fantastical) myths can be offered, which Rushdie, generous to a fault, does, in plenty.

During the last decade every opportunity for intellectual clarity was passed up by the well-spoken elites — in the academy, in publishing and writing, in all of the arts — as people were encouraged to retreat into their private hells of belief, unwilling to meet other people at face value, living out suspicion, paranoia, conspiracy, fear-mongering and delusion at the most personal level. To give up your humanity without even the promise of anything in return (which is what something like the escalation of social media dependency or call-out culture or ideological surrender represents) is quite something. That’s what this last decade demonstrated in spades. It was not a pretty sight, and it’s about to get worse.