Iraq's parliament voted to evict US troops while lawmakers shouted, “No, no to America! No, no to Israel!” 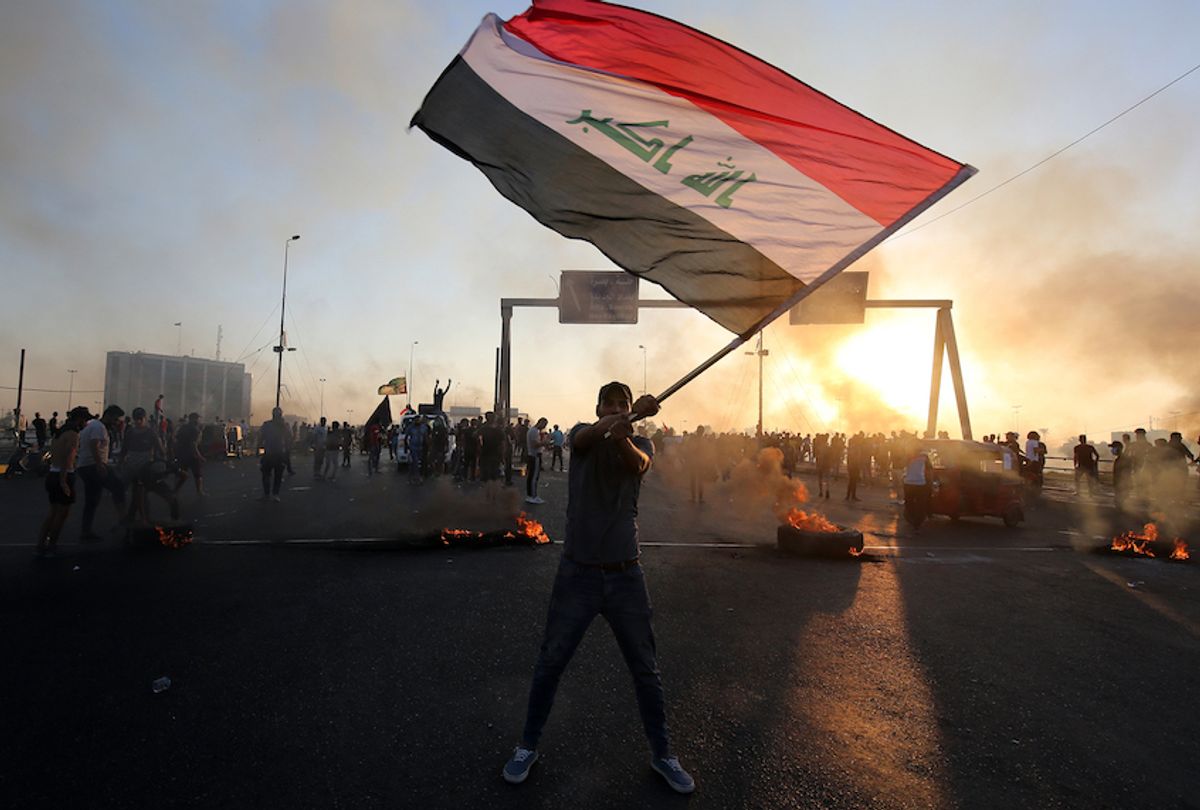 TOPSHOT - An Iraqi protester waves the national flag during a demonstration against state corruption, failing public services, and unemployment, in the Iraqi capital Baghdad on October 5, 2019. - Renewed protests took place under live fire in Iraq's capital and the country's south Saturday as the government struggled to agree a response to days of rallies that have left nearly 100 dead. The largely spontaneous gatherings of demonstrators -- whose demands have evolved since they began on Tuesday from employment and better services to fundamental government change -- have swelled despite an internet blackout and overtures by the country's elite. Hours after a curfew in Baghdad was lifted on Saturday morning, dozens of protesters rallied around the oil ministry in the capital, facing live rounds fired in their direction, an AFP photographer said. (Photo by AHMAD AL-RUBAYE / AFP) (Photo by AHMAD AL-RUBAYE/AFP via Getty Images) (Ahmad Al-Rubaye/ Afp via Getty Images)
--

The Iraqi parliament voted on Sunday to expel United States troops from its borders in response to President Donald Trump ordering the assassination of an Iranian military official, General Qasem Soleimani.

As Iraqi lawmakers shouted “Out, out, occupier! No, no to America! No, no to Israel!”, the Iraqi parliament passed a nonbinding resolution pressing Prime Minister Adel Abdul-Mahdi to rescind Iraq's invitation to the American military to help them after the Islamic State conquered one-third of their land in 2014. Abdul-Mahdi has already expressed support for the measure, arguing that the United States had violated Iraqi sovereignty by striking Maj. Gen. Qassem Soleimani with a drone while he was near an airport in their capital city of Baghdad. A top Iraqi paramilitary commander, Abu Mahdi al-Mohandes, was also killed in the drone strike.

There is some question about whether Iraq can simply kick out American troops. Some political and legal observers have pointed out that, according to Iraqi law, a bill would have to be presented by either the prime minister or the president and pass two readings in parliament, followed by the United States being given one year's notice to depart. These critics argue that the current cabinet is in caretaker mode and therefore cannot initiate something of this nature, according to The Wall Street Journal.

That consideration did not stop Abdul-Mahdi from urging parliament on Sunday to take "urgent measures" to deal with the assassination of Soleimani and describing the event as a "political assassination." His actions are consistent with the observation made by experts who believe Iraq can simply kick out American troops. They argue constitutional procedures and laws have frequently been ignored in Iraq, and even then there is a possibility that the US-Iraqi military arrangement does not apply because it was based on an exchange of letters rather than a formal agreement.

The Trump administration decided to assassinate Soleimani due to American bases in Iraq being continuously attacked by Iranian rockets, with the administration concluding that Soleimani was the main perpetrator. His action was a stark contrast to his decision in June to call off a strike against Iran because he felt it was excessive.

"They came and they said, 'Sir, we're ready to go. We'd like a decision,'" Trump recalled to NBC host Chuck Todd at the time. "I said, 'I want to know something before you go. How many people will be killed, in this case Iranians?' I said, 'How many people are going to be killed?' 'Sir, I'd like get back to you on that,' great people these generals. They said, came back, said, 'Sir, approximately 150.' And I thought about it for a second and I said, 'You know what? They shot down an unmanned drone, plane, whatever you want to call it. And here we are sitting with 150 dead people that would have taken place probably within a half an hour after I said go ahead.' And I didn't like it. I didn't think it was, I didn’t think it was proportionate."