"Now they have done in the open what they have been doing against us and our friends for decades," Gorka tells Fox 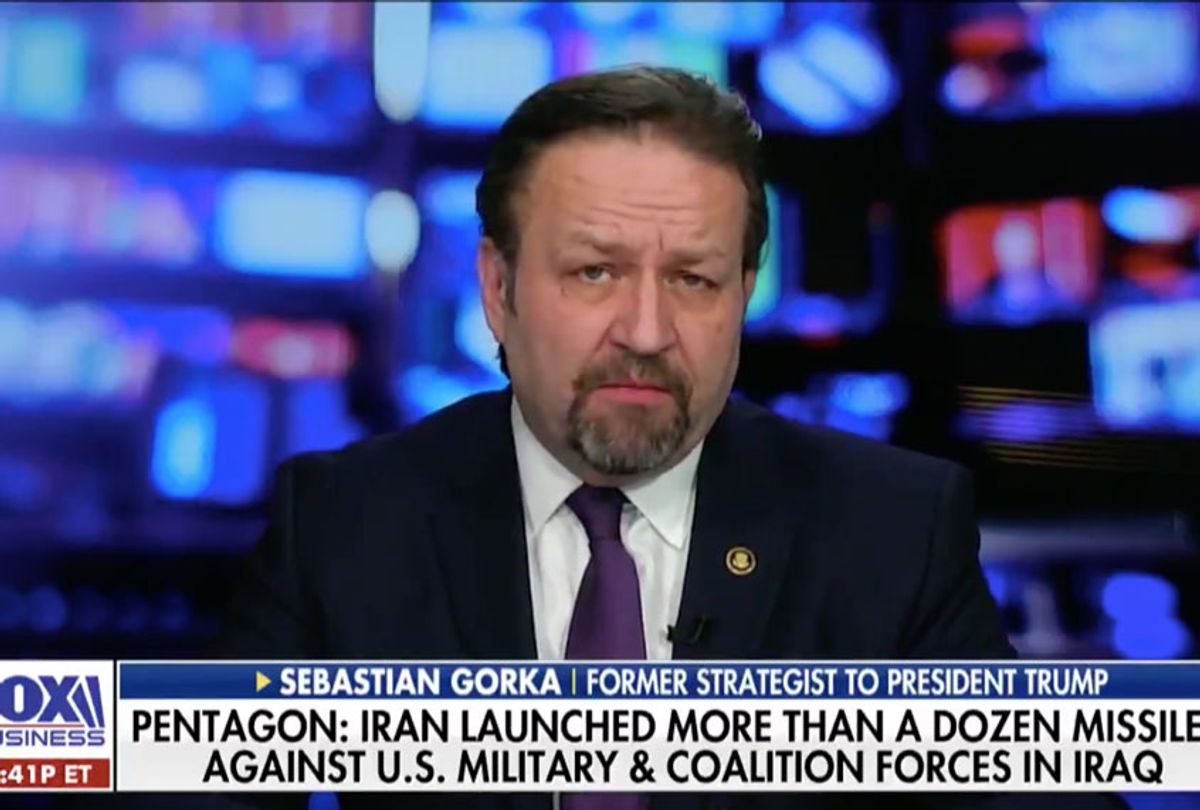 Sebastian Gorka, who served in the Trump administration over a seven month period in 2017, vowed that America would unleash “holy hell” against Iran for retaliating against the ordered killing of Qassem Soleimani.

“They chose the wrong time with the wrong president,” Gorka said while appearing on “Lou Dobbs Tonight” on the Fox Business Network. “This president will unleash holy hell on that regime — not against the people of Persia but against the murderous mullahs that have created a theocratic dictatorship that is a pariah and the greatest sponsor of state terrorism in the world today.”

He later added that “now everyone who is alive, breathing and has a pulse should know what Iran is and how it has to be dealt with — and that’s exactly what Donald Trump, the 45th commander in chief of the United States, will do.”

Earlier in the interview, Gorka described Iran’s retaliation as “a massive miscalculation by the Iranian regime.” He argued that Americans should nonetheless “welcome what they have decided to do, because now they have done in the open what they have been doing against us and our friends for decades in the asymmetric warfare domain.”

According to Gorka, Iran has “used proxies because they are cowards. They have slunk around six continents of the world using terrorist weapons, bombs against innocent people, IEDs against our service men and women.”

The former Trump adviser concluded, “Now there can be no question that Iran is a threat to American national security. You don't have to be an expert in terrorism or irregular warfare to know that Iran is an imminent danger to our country, to our citizens, to our servicemen and women.”

Gorka’s words were similar to those of Fox News host Sean Hannity, who on Tuesday said that Iran is “going to get hit hard. Their hostility will now be met with the full force of the greatest, most advanced, most sophisticated military this world has ever seen. As a former CIA station chief Dan Hoffman pointed out: Any hostile action by Iran would be regime suicide.”

Gorka has positioned himself as an expert on Islam in the past, despite lacking expertise. When he began teaching at Marine Corps University in 2014, it was revealed that his academic chair was funded by a major Republican Party donor and Heritage Foundation chairman to whom he was related by marriage. (That donor, Thomas Saunders III, claimed he did not advocate for Gorka.) Gorka’s lectures were controversial, because he reportedly  “made a difficult and complex situation simple and confirmed the officers’ prejudices and assumptions." Around this same time, he became a regular talking head for Fox News and was eventually offered a job at Breitbart by Steve Bannon.

The former Trump adviser has courted controversy because of his connection to Vitézi Rend, a Hungarian far-right group that is sympathetic to Nazi goals. Gorka has sworn a lifetime loyalty oath to the group and has other connections to Hungarian far-right and nationalist organizations, including some with avowedly anti-Semitic and racist beliefs.