USAID arriving in Bolivia to "monitor elections," raising fears of U.S. meddling in May 3 vote 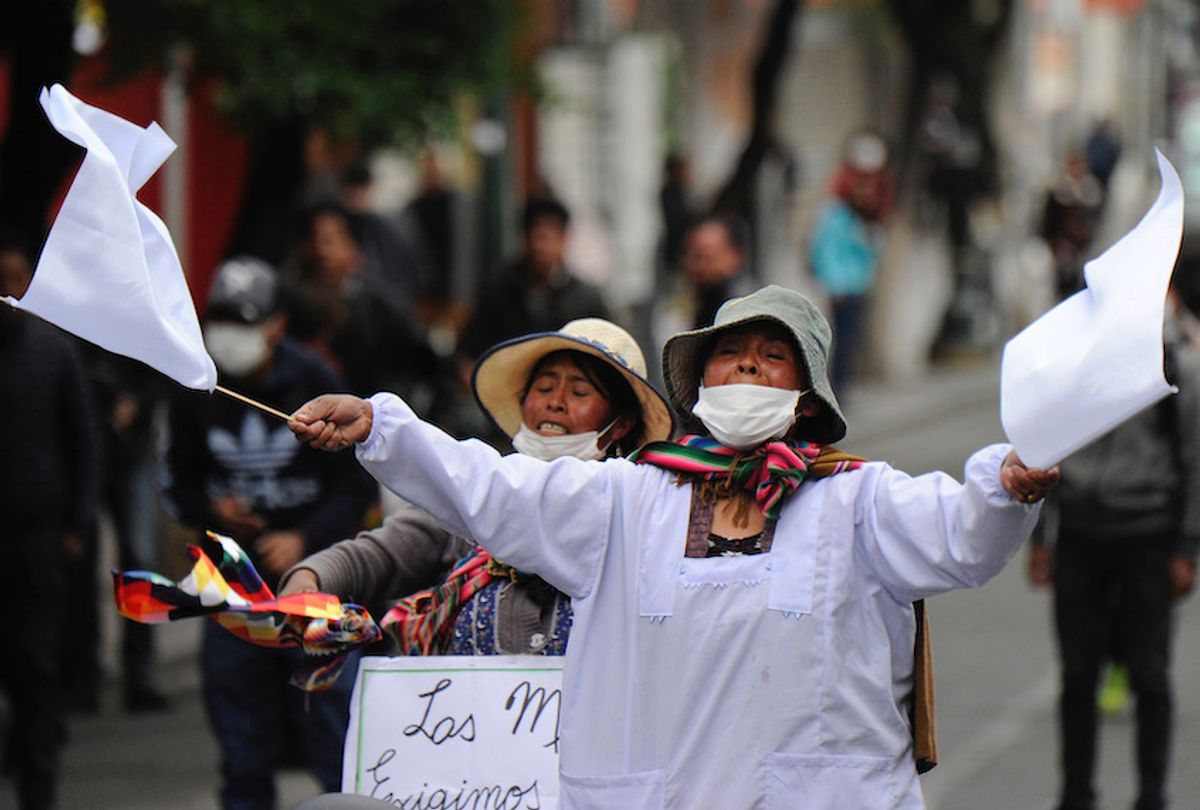 A supporters of Bolivian ex-President Evo Morales waves white flags during clashes with riot police following a protest in La Paz on November 13, 2019. - Bolivia's exiled ex-president Evo Morales said Wednesday he was ready to return to "pacify" his country amid weeks of unrest that led to his resignation. (Photo by JORGE BERNAL / AFP) (Photo by JORGE BERNAL/AFP via Getty Images) (Jorge Bernal/AFP via Getty Images)
--

Seven years after former President Evo Morales expelled the organization from his country, claiming it was undermining his government, USAID is returning to Bolivia at the invitation of Jeanine Añez's coup government to monitor elections in the Latin American nation set for May 3.

Officials from USAID and the U.S.-dominated Organization for American States (OAS) arrived in Bolivia Thursday to "give technical aid to the election process in Bolivia."

"With USAID and OAS assisting in the May 2020 election, we can be sure its goal will be similar to Bolivia's 1966 election (following 64 coup), which CIA steered to ensure country returned to constitutionality in way that meshed U.S. interests," Field tweeted.

The Morales government expelled USAID from Bolivia on May 1, 2013 due to the U.S. agency's repeated actions conspiring "against the people and especially against the country" of Bolivia.

The right-wing Añez government, which unilaterally declared its own legitimacy in November after toppling the democratically-elected Morales, has focused on privatizating Bolivian resources like the country's vast lithium deposits, the rolling back of Morales-era reforms, and closer ties to the U.S.

In remarks Thursday, Añez claimed that the country was on the up and up following the coup that led to Morales' resignation in November.

"Bolivia is experiencing a process of democratic recovery," said Añez. "I was reviewing studies of social behavior and the level of optimism and hope of Bolivians has increased in the last month."

President Donald Trump's White House has welcomed the change in Bolivia, though critics of Añez urged caution from Washington with respect to supporting the new government in comments to the Associated Press.

"The Trump administration has clearly picked sides," Kathryn Ledebur, director of the Andean Information Network, told AP. "But it should also highlight concerns about human rights violations and erosion of democratic rights."

Progressives questioned the motivation of the White House to send aid in advance of the election.

"Trump recently described this initiative of now giving aid to Bolivia as 'vital to the national interests of the U.S.,'" said one activist, "so you know, nothing good."