In a new Netflix docuseries, cheerleaders finally get filmed like the world-class athletes they are 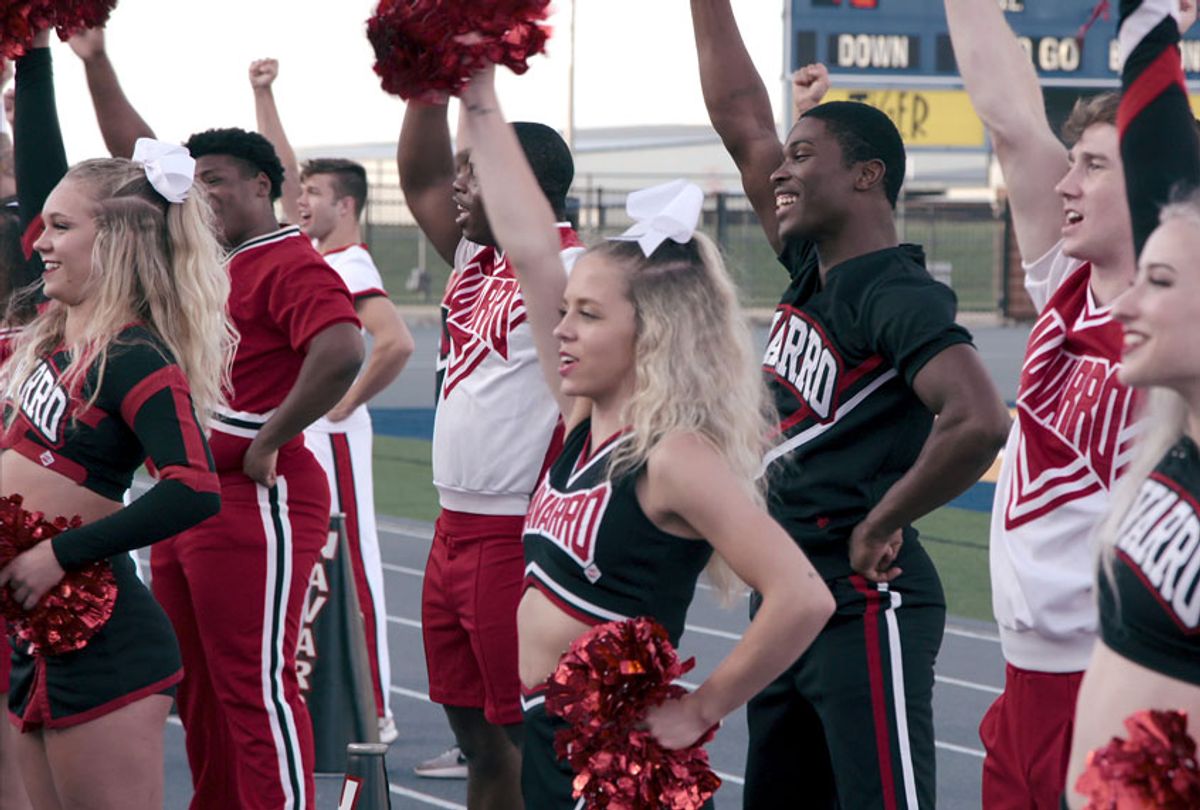 Pop culture portrayals of cheerleaders typically seem stuck in two gears: ditzy bubblehead or the cattiest of mean girls. Sometimes the script is slightly upended, and the cheerleaders turn scream queens (chainsaws may or may not be involved).

But “Cheer,” a stellar new Netflix docuseries, sheds all hints of those clichés, and with the ferocity and near-reverence usually reserved for other sports — football, distance running, baseball — explores cheerleaders as the all-American athletes they are. This is done by specifically focusing on the Navarro College cheer team, one of the most competitive and nationally-recognized squads in the nation, and their quest to win a 14th title at the NCA College Nationals in Daytona, Florida.

I spoke with director Greg Whitely about how this series reflected his past work, misconceptions about the sport and how this series explored the team members lives off the mat.

Some of your other memorable projects — I’m thinking of “Resolved” and “Most Likely to Succeed” — lift the cover on topics I think other people may dismiss because they are associated with youth. Then you use that as a lens to introduce important social commentary; in “Resolved,” you used high school debate to talk about issues of race and educational disparity. When did you realize the Navarro Cheer team had the same possibilities for a documentary?

In all those cases, I am just looking for a good story. I’m looking for the equivalent of a page-turner, and I just gravitate towards those things, which tend to be similar to the books and movies I love. A lot of them will touch on really deep themes, but at the heart of all of them is just a really great story.

I was immediately struck by how much these girls and boys really want to be cheerleaders and really want to succeed as cheerleaders. I think if you could just find anybody who really wants something, and then you can somehow decide a schedule in which you can determine whether or not they get what they want, I think you’ll have a really great story.

And then as far as the social issues are concerned, those become very important pieces to who they are. Our job as documentarians is to tell those stories in a way that is as unfettered and uncluttered by our own agenda as possible — so we try to tell those stories with a cold eye and a warm heart. Our job is to really tell that story, as honestly as we can, and with as much warmth and compassion as we can.

Did you have any misconceptions about competitive cheerleading coming into this project?

We were filming on the sidelines in Scooba, Mississippi, during the first two seasons we were making of “Last Chance U.” In an attempt to really make season two different than season one, we wanted to explore elements of the campus that we [Whitely and “Last Chance U” and “Cheer” producer Chelsea Yarnell] didn’t get to explore before. I said, ‘You know, we should go check out a cheerleading practice.’

I was just so stunned by the intensity of the practice, and also how aggressive and impressive the stunts were in practice. We would watch them during the games and I never  — either I was missing it or they weren't doing that. So I brought this up to them, and they said, ‘Oh no, we don't do these at the football game. We save these for our routine for Daytona.’

When they explained that to Chelsea and I, we immediately thought that sounds like it would be an interesting series. There were all kinds of things that continue to surprise me, but I would just say chief among them was they are the toughest athletes I’ve ever filmed, and I don’t think that was something I would have thought would be true before I started exploring this world.

Were you surprised by the existence of “cheer-lebrities,” these girls and boys who have amassed unbelievable social media followings within the sport?

So this is something that is kind of interesting about cheerleading. I would still say that it’s a fairly niche activity. I don’t think it has the same kind of base as college football, for instance, right? But the level of passion among the people who follow it is real and it isn’t a number to sniff at. Like one of these girls — a girl that I had never heard of in my life — had half a million followers, and my daughter immediately knew who she was.

I would say, ‘Oh, there’s this girl, she’s got kind of a big following — Gabi…” And before I could get the last name out my daughter was like, “Gabi Butler?’

What were some of the unexpected ways you saw economic inequity in play in the world of competitive cheerleading? For example, one that surprised me was in Jerry talking about his struggles with weight and how that tied into the food his family was able to afford.

For a show like this, where you’ve got six episodes, you are really telling a six-hour movie with six chapters. In doing that, we’ve learned that you’ve got to focus on three or four — maybe five — main characters. Anything beyond that, and you’re starting to give characters and their development the short shrift.

So we started to identify who we thought those three to five people were going to be, you start to just think ‘OK, let's get to know them, what are their backstories? What is it that makes them tick? What do they want and what's getting in the way of what it is they want?’

And as you know, Jerry and Morgan and some of the other members — one of the things that all of them had in common was that they came from backgrounds that made cheerleading or participating in cheerleading difficult. This was another thing that was a bit of a surprise to us. It is a fairly expensive activity to indulge in the highest levels. This is true of a lot of club sports, like if you play club soccer, that quickly becomes expense.

So in cheerleading, you have uniforms, which are surprisingly expensive, and you have a lot of travel if you’re going to compete at the highest levels of that sport. And so when you have people like Jerry, who were living in their cars for a portion of their lives, this becomes really difficult.

One of the elements of this documentary series that I really appreciated was how the identity of Corsicanna and the Navarro cheer team sort of dovetail at various points. How did you make the decision to make the city itself a character of sorts?

That's something we try and always do. Wherever we go, the place where they reside becomes an important part of the overall story that we’re seeking to tell. I think it’s really interesting, in that you’ve got an activity that has so many progressive elements to it in a town that I think, on the surface, seems to be stuck in time in a very charming and beautiful way.

You think, ‘Oh, well, what must this be like for these kids to be here? How are they different than this town? How are they the same as the town and what ways does this town influence them and in what way do they influence the town?’  I'm not sure that we ever fully got to the bottom of answering that last part, but we certainly look at it as our jobs as documentarians to understand what it would feel like to live there and be there. That’s an important part of telling the story of these cheerleaders.