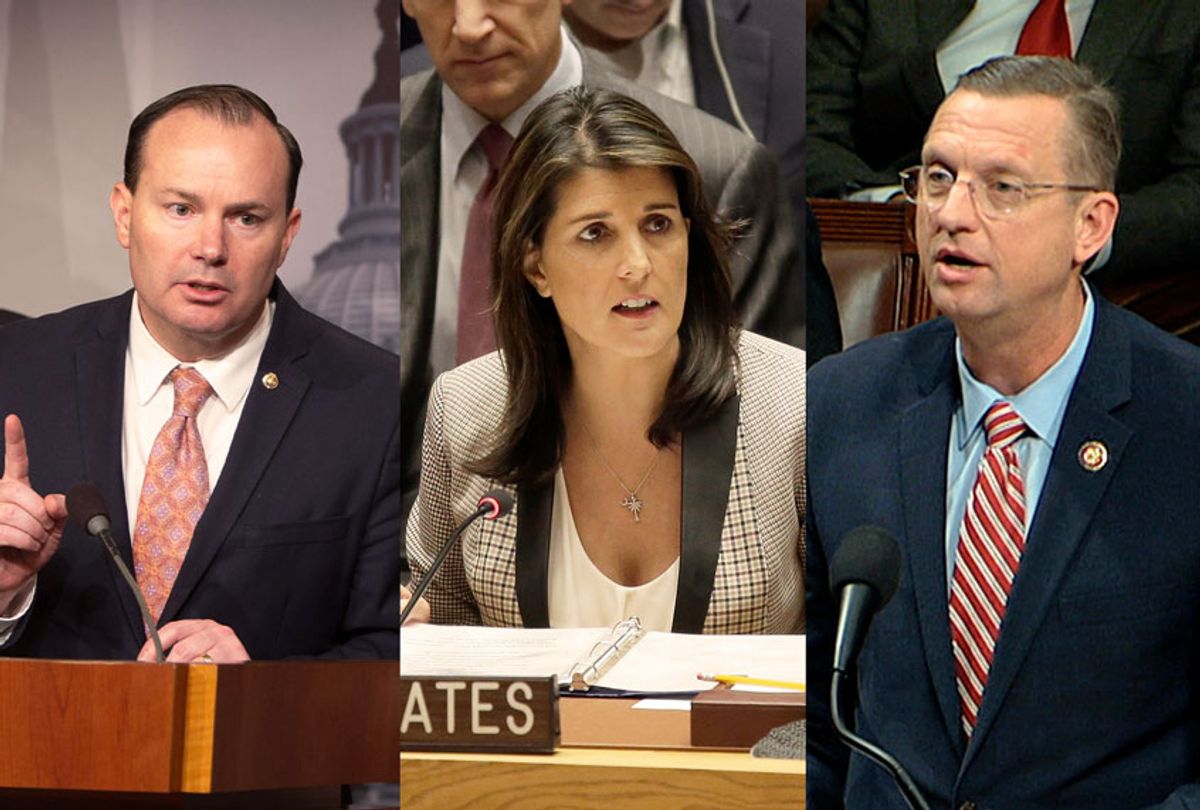 Earlier this week, before Donald Trump backed down from escalating the conflict with Iran, I wrote a piece arguing that the one improvement over the 2003 run-up to the war with Iraq was that this time around anti-war voices were being taken seriously. Now that the week is over and Trump seems disinclined to do more than thump his chest while (thankfully) sidestepping a real war, it's worth taking a step back and looking at another shift from the George W. Bush era: The efforts by hawks to silence antiwar critics by calling them traitors, terrorist sympathizers, and other slurs aren't working anymore.

To be clear, Republicans tried to use these old demonizing tactics in the wake of Trump's order to assassinate Maj. Gen. Qassem Soleimani, the second most powerful man in Iran.

On Monday, Trump's former UN ambassador Nikki Haley said, "The only ones that are mourning the loss of Soleimani are our Democrat leadership, and our Democrat presidential candidates."

Sen. Lindsey Graham of South Carolina declared that anyone who questioned Trump's obvious lies justifying the killing of Soleimani was "empowering the enemy."

This is a game conservatives perfected in the Bush years: Bullying liberals with false accusations of being sympathetic to Islamic terrorism, simply for daring to question the bloodthirsty and provocative approach that Republicans prefer.

It's an accusation that never made sense, starting with the fact that the liberal values of secularism, sexual liberation, and feminism that homegrown conservatives hate are also despised by Islamic theocrats. But it's also an accusation that doesn't grapple with one main reason that most liberals prescribe a dovish approach: More violence only breeds more terrorism — a theory proved by the way ISIS grew from the ashes of Bush's war in Iraq.

But, during those bad old days, this outrageous lie tended to get traction, and liberals were often on the defensive, trying haplessly to argue that, no, they don't love terrorists.

This time around, however, the tactic ... simply didn't work. Collins found himself forced to explicitly apologize. There was absolutely no reason to believe his apology, however, as he's still fundraising off this "Democrats love terrorists" sentiment — and was still making this outrageous claim on Fox News only two hours before his supposed apology. But even the fact that Collins had to pretend to be sorry shows that the current political environment is no longer so friendly to this strategy.

Similarly, Haley is now playing a bizarre game of clean-up, trying to pretend she was using some other, more obscure definition of the word "mourning" to justify saying what she did. As with Collins, it's utter nonsense, but the fact that she's scrambling demonstrates that casually equating criticism of a president's actions with treason isn't working quite as well as it used to.

The ultimate display of how the McCarthyite tactics conservatives have long used to silence anti-war voices are falling flat might have been that truly epic rant unleashed by Sen. Mike Lee, a Republican from Utah, who, along with Sen. Rand Paul of Kentucky, broke ranks with other Republicans to argue that Trump's weak excuses for killing Soleimani and escalating tension with Iran simply weren't good enough.

Lee complained that the Trump administration was using accusations that "you will be emboldening Iran" in order to convince senators that "we need to be good little boys and girls and not debate this in public". He called such pressure tactics "un-American" and "absolutely insane."

So yeah, when even Republicans are bristling under these kind of intimidation tactics, it's safe to say things have changed a lot from the days when anyone offering criticism of the Bush administration's warmongering ran the risk of being labeled a "terrorist sympathizer."

This shift has two major causes. First, the Iraq war was such an epic disaster that it casts a pall over any and all tactics that were used to support it. Second of all, Trump is president and no one in their right mind thinks he had good intentions with this Soleimani killing, since Trump has never experienced a good intention in his life.

On the first part, the big problem facing conservatives rehashing the same tactics they used to defend the Iraq war is their opponents can simply, calmly ask how their methods worked out the last time. Sure, they were able to accomplish the immediate goal of quashing meaningful debate over the war, but in the end, their critics were proved right and they were proved wrong. Silencing good faith arguments is bad. Silencing arguments that later turn out to be correct makes you look foolish, cowardly and tyrannical.

On the second part, it's hard for pro-war people to claim they are defending the nation when it's clear that Trump, the guy who started all this, doesn't give a fig about national security, but cares only about himself. With Bush, there was at least an argument that he was trying to do the right thing, as ill-conceived as it was. But with Trump, even the illusion that he has some noble purpose that his critics could be undermining is a joke.

Common sense alone should tell us this about Trump's character. But just in case there was any doubt, reporting from this week confirms it: Trump's motive in killing Soleimani wasn't national security, but a belief that it would help him politically.

A report from the Wall Street Journal released Thursday contained this newish nugget of information: "Mr. Trump, after the strike, told associates he was under pressure to deal with Gen. Soleimani from GOP senators he views as important supporters in his coming impeachment trial in the Senate, associates said."

On Friday, Maggie Haberman, a New York Times reporter who covers the White House, noted that Trump "actually was surprised [killing Soleimani] was not more of a unifying event for the country" and had hoped he could distract from impeachment by generating the same rally-round-the-flag environment "along the lines of what you saw around the Iraq War lead-up," which successfully silenced criticism of Bush during that time.

This is in line with Washington Post reporting that the White House believed "the attack on Soleimani would be politically popular" and the fact that, shortly after the killing, the Trump campaign blanketed Facebook with nearly 800 separate ads bragging about the strike. It also comports with everything we know about Trump's character, that is, as a man who never does anything for any reason outside of self-interest.

All of which means that if you yell "terrorist sympathizer" you're actually attacking someone who is questioning the wisdom of nearly starting a war in hopes of getting a polling boost going into an election year. Not exactly the most morally compelling of arguments for behavior that was already pretty shady.