Why do minor culture-war issues dominate election coverage, while we ignore the serious stuff? 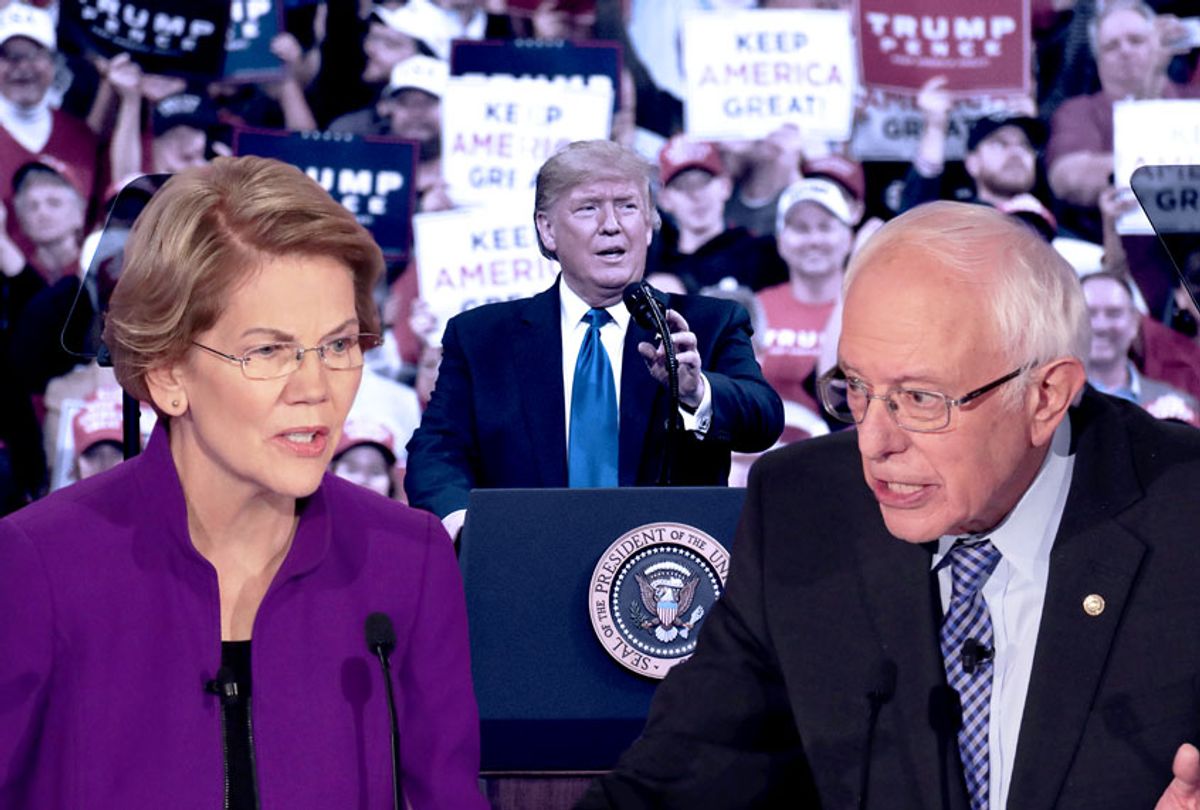 Tuesday night offered one of the most damning illustrations of one of the most persistent problems in politics: The way a seemingly inconsequential culture-war fight can loom larger in the public imagination during elections than meatier issues like the economy, foreign policy and whether or not our democracy can survive a wannabe fascist president.

The Democratic primary debate touched on a large number of serious issues pressing down on the country: De-escalating tensions that Trump has escalated with Iran, affordable health care, tax policy, climate change, accessible child care, trade policy. But one of the big flashpoints, which threatened to loom over the rest of the debate, was what, on the surface, appears to be a quarrel between Sen. Elizabeth Warren of Massachusetts and Sen. Bernie Sanders of Vermont over whether he was kind of mansplainy to her that one time about whether a woman could win the presidency.

Meanwhile, at Donald Trump's rally scheduled as counter-programming to the Democratic debate, the president — who is facing down impeachment and trying to recover from nearly starting a war with Iran — decided to spend his time doing a comedy routine that would have felt hackneyed in the '80s, about his grievances with common household appliances like showers, toilets, light bulbs and dishwashers.

Trump's rant about low-flow showers and the supposedly ugly lighting of light bulbs was so painfully dumb that MSNBC host Joe Scarborough was reduced to laughter on-air.

Elections always get bogged down in minor bullshit — see also Hillary Clinton's emails, false accusations that Al Gore said he "invented" the internet, John Kerry's wind-surfing — but it's particularly galling to see it happen in an election cycle where the very survival of our democracy could very well be at stake.

Why can't we all just collectively rise above it? Why are Americans so petty?

One possible answer, one that might allow ourselves to forgive ourselves somewhat, is that a lot of these petty political tiffs aren't actually as minor as they seem on the surface. On the contrary, some of these apparently silly culture-war battles are a form of symbolic politics. What they symbolize is often not small potatoes at all, but something that cuts to the heart of some of the biggest tension points and issues facing our country.

Take Trump's dumb obsession with toilets and light bulbs. He returns to that well time and again because his audience eats this nonsense up. There's clearly a lot of anger and resentment there, so much so that it's safe to say it isn't really about water-efficient toilets.

Right now there is a growing movement among young people, not just in the U.S. but internationally, who are deservedly angry and correctly accusing older generations of ignoring the global environmental crisis. The effects of decades of neglect are being seen as Australia burns and so many animals are dead that scientists fear major species may go extinct.

It's not a reach to say that the aging, conservative demographic that supports Trump is feeling a wee bit defensive in light of being told — again, accurately — that they screwed up big time, due solely to their own laziness and selfishness.

That's where Trump's dumb appliance rants come in. Trump reframes the environmental issue not as a matter of planetary survival and the quality of life we are leaving to those who come after us, but as a bunch of nanny-state scolds trying to take away your water pressure. This, in turn, allows his supporters to reimagine themselves not as the bad guys who turned their backs on climate change for decades, but as the noble victims of "elites" who supposedly have ulterior motives in wanting to reduce resource usage. He is giving them a way to escape responsibility and continue lying to themselves about how serious this problem is.

In other words, Trump's light bulb obession is ultimately about the environment and climate change — which are not small issues at all, but the most pressing issues facing our world. That means his tactics are much worse than dumb. They are plain evil.

A similar thing is going on with the Warren/Sanders spat. On its surface, it's a minor disagreement, which is over whether or not Sanders was discouraging Warren from running for president by suggesting that the sexism firewall was too much to overcome. As I've argued earlier, it would have likely have gone away almost completely if Sanders had just apologized, because it was really an inconsequential episode and few people would care.

But instead, Sanders is digging in and casting Warren as a liar. So now this minor kerfuffle is morphing into a symbolic event touching on all manner of ways that women are held back, marginalized, and otherwise discounted: By being called liars when they talk about sexism, no matter how obvious it is that they're likely telling the truth. By being expected to cater to men's needs, even as men pour cold water over women's ambitions. By having their expertise and authority, even over their own lives, ignored in favor of self-serving narratives offered by men.

These concerns are not minor issues. We have all witnessed, with the outpouring of outrage from the #MeToo movement in recent years, how the cultural tendency to assume a woman is lying until proven otherwise gives license to rapists and other sexual predators. We have seen how valuing men's comfort over women's equality contributes to serious social problems ranging from the wealth and pay gap to the lack of female representation in politics. And our society's skepticism about women's ability to manage and understand their own lives undergirds the ongoing assault over a woman's basic right to control her own fertility.

Whether or not liberal men will be willing to truly accept women as equals is not a minor concern, but literally a make-or-break question, since achieving feminist goals without liberal male support — robust support, not tepid support — is probably impossible. So what appears at first glance to be a minor issue, once again, is standing in for a whole ocean of anxieties and conflicts that matter quite a bit to quite a few people.

So it's OK to be frustrated that silly culture-war flotsam seems to clog up political discourse. At least sometimes (not always: See Clinton's emails), those culture war flashpoints aren't nearly as minor as they initially seem. Big, complex issues can be hard to talk about in a meaningful way, especially in the fast-moving, soundbite-oriented political environment of the 21st century. Symbolic politics are ciphers for all the complex emotions and power struggles that can otherwise be hard to boil down to a five-minute debate on cable news. That's why these "minor" issues that are really bite-size stand-ins for much bigger issues will always capture the public's attention.