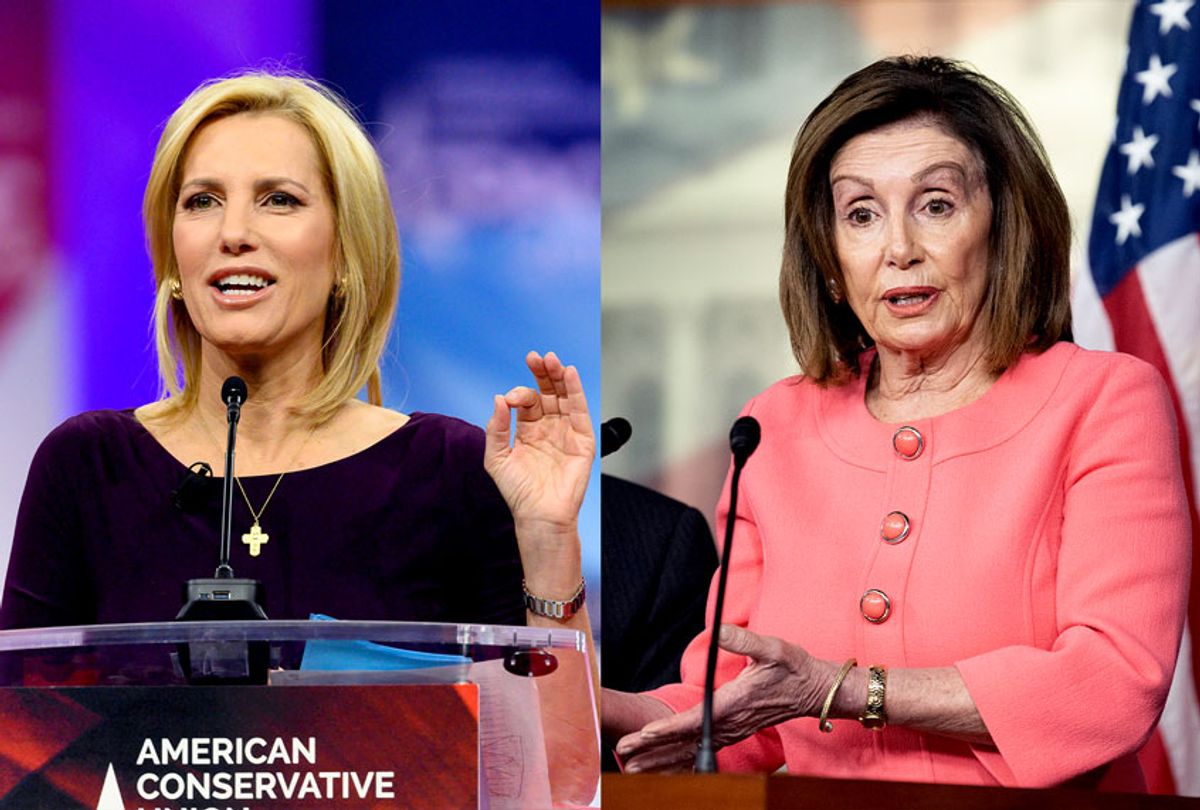 Fox News host Laura Ingraham implied that Speaker of the House Nancy Pelosi may have "dementia" while criticizing the Democrat for misquoting President Donald Trump's July 25 conversation with Ukrainian President Volodymyr Zelensky, which has played a key role in the president's impeachment.

"How about the fact that the speaker did — you know, she pulled an Adam Schiff [a reference to the California Democrat and House Intelligence Committee chairman] and misquoted the original transcript," Ingraham told her guest Robert Ray, a lawyer who succeeded Ken Starr as head of the Office of the Independent Counsel from 1999 to 2002. "The president never said, 'Do me a favor.' He said, 'Do us a favor, though' — meaning the American taxpayer, the American people. She, as the House Speaker, misstated what was said on that call."

Later during the interview she referred to Pelosi's actions as "a joke" and argued that "they didn't like the transcript, so then they just keep misquoting it. That's really convenient. What a joke."

The Senate Majority Leader has indicated that he will not allow the president to be convicted in the Senate. Last month McConnell said that Senate Republicans would engage in "total coordination" with the White House during an impeachment trial, adding that "there will be no difference between the president's position and our position as to how to handle this." One of the Senate's most influential Republicans, Lindsey Graham of South Carolina, has also said, "I'm not trying to pretend to be a fair juror here. What I see coming, happening today, is just partisan nonsense."

Ingraham has frequently attacked Trump's impeachment. On a day in November when America's top diplomat in Ukraine testified that the president had attempted to pressure that country into probing his political opponents, Ingraham and guest Raymond Arroyo mocked the notion that there had been any "bombshell" testimony and described Schiff as having a "priggish" presentation and "cat eyes."

A month before that, Ingraham accused Army Lt. Col. Alexander Vindman, who testified that he had repeatedly objected to Trump's phone call to Ukraine, of having dual loyalties. "Col. Vindman emigrated from Ukraine along with his family when he was a child and is fluent in Ukrainian and Russian," Ingraham said. "Ukrainian officials sought advice from him about how to deal with Mr. Giuliani, though they typically communicated in English."

She added, "We have a U.S. national security official who is advising Ukraine while working inside the White House, apparently against the president's interest. And, usually, they spoke in English. Isn't that kind of an interesting angle on this story?"

See full video of the interview below: