The convergence: Third-world debt and the climate crisis are intimately connected

As rich financiers toast to capitalism in Davos, the targets of their exploitation suffer abroad and at home 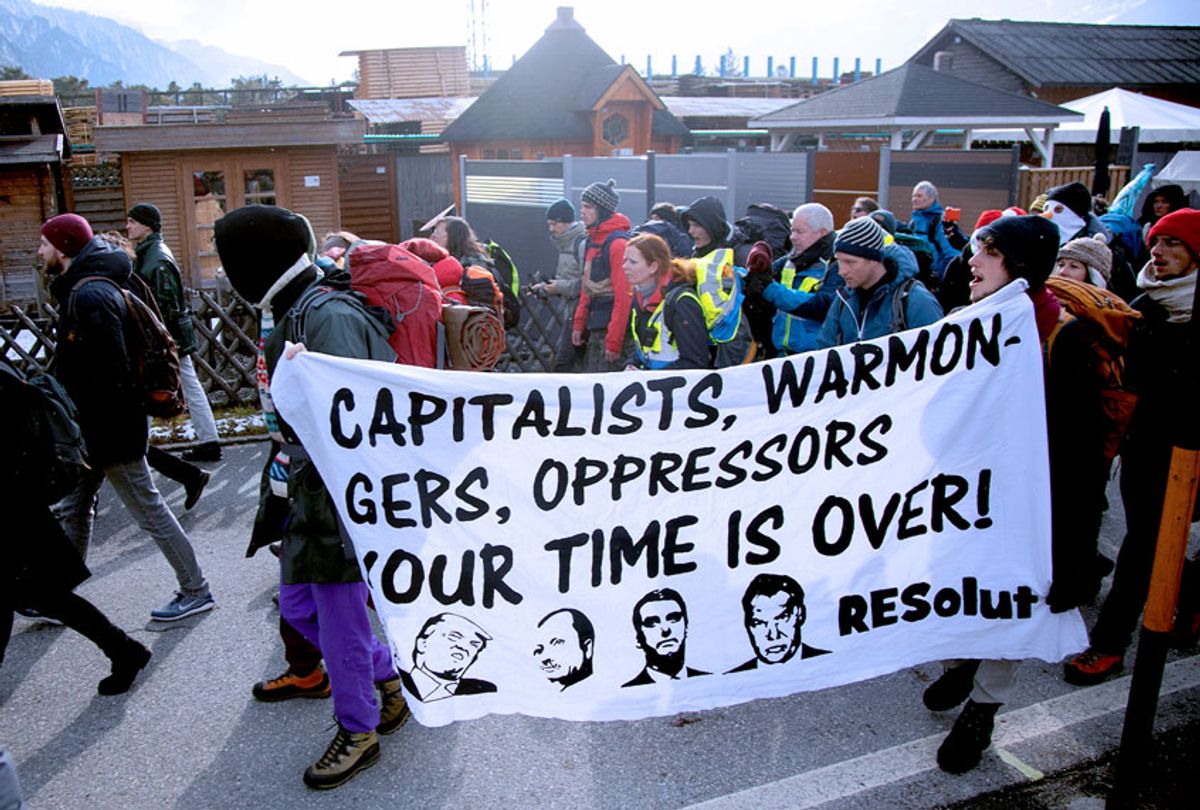 The first day of the Strike WEF march on Davos on 18th of January 2020 near Davos, Switzerland. The first day of the march started in Lanquart with speeches and hot food and ended in Schiers. The protest is planned to finish in Davos with a public meeting in the town on the day the WEF begins. The march is a three day protest against the World Economic Forum meeting in Davos. The activists want climate justice and think that The WEF is for the world's richest and political elite only. (Kristian Buus/In Pictures via Getty Images)
--

Things never happen for one reason.

Indeed, history moves as a great confluence of things that appear, at their surface, very different — even unrelated, though they may happen at the same moment in time.

There's been a lot of reporting on the chemistry and meteorological science that helps us make the linkages between the burning of fossil fuels and changes in our atmosphere that set the stage for the massive wildfires in places like California and Australia.

But that's just part of the story.

As it turns out there's a connection between the world's rapidly escalating levels of debt, surging wealth inequality, climate change and the increasing squeeze put on the earth's people and the planet's natural resources by an oversized financial sector that's devouring everything in sight by trying to monetize it.

Rana Foroohar's brilliant book "Makers and Takers: The Rise of Finance and the Fall of American Business," flags the domestic face of the global plague of financialization. She explains how, nowadays, banks increasingly make money not from lending money to create new businesses or help existing ones to grow, but rather by generating and speculating on debt.

And, despite the well documented relationship between this proliferation of debt speculation epitomized with the catastrophic mortgage backed security debacle that led to several million Americans losing their homes, the Obama administration's  "reforms" only  set the stage for the biggest banks to get bigger via yet more debt speculation.

"Less than half of all derivatives, those financial weapons of mass destruction that poured gasoline on the crisis, are regulated, even after the passing of Dodd-Frank financial reform legislation in 2010," writes Foroohar. "We may have gotten past the crisis of 2010, but we have not fixed our financial system."

If you are of a certain age, the bigness of banks and their dominion over our lives appears to be a totally normal circumstance because it is all you have ever known.  Yet if we don't do something very radical and soon, it is all you will ever know.

This is particularly true if you are one of the millions of Americans whose future prospects for marriage, procreation, starting a business, moving out of your parent's home, or pursuing your artistic ambitions are being held hostage to your student loan indenture — which, thanks to Congress, is not even dischargeable with bankruptcy.

The only consolation for you is that you are not alone.

As you work your soul-killing job to stay current on your college loans, keep in mind that there are whole nations of poor people whose futures are also shackled by a mountain of debt from which only death can redeem them.

Around the world, dozens of theoretically sovereign nations are hopelessly in debt to a global financial system that is rigged to benefit multinational corporations. Those corporations strip these places of all of their natural resources, like gold, diamonds, oil, bauxite and rare earth elements.

And once the materials are extracted from the earth, they are sent to the cheapest place on the planet to mould them into sellable products — wherever has the most lax labor and environmental regulations at the moment. Then, to grow and protect the wealth generated by this process, they park their revenues in off-shore tax jurisdictions.

And with their hidden billions, they leverage their financial power to protect the vast political and economic system that made this miserable scheme possible to begin with. You see their influence in our media, the academy, philanthropy, popular culture, and of coruse in our politics. Like the smog from the planet's burning forests, it covers everything and fills our lungs.

Here at home, student debt lenders sink their talons in prospective college students with a persuasive pitch about the virtues of self-improvement. And abroad, debt peddlers use the seduction of "progress and economic development" to sink their claws into these aforementioned kinds of countries, making them into satellites for this consolidated system of exploitation. Of course, there are too many tragic cases where a corrupt political leader just sells out their country's natural resource base for a cut, knowing that there will be a soft landing for them and their progeny in a Trump Tower.

On Jan. 17, in a speech that got obscured by "As the Trump Turns," Kristalina Georgieva, the managing director of the International Monetary Fund (IMF) warned that a new analysis by the IMF identified a very real possibility the growing dominance of the financial sector was setting a stage for a looming massive financial disaster on the scale of the Great Depression, even as the world grapples with the prospect of irreversible climate change.

She continued by using the U.S. as an example.

"The negative impact is especially visible where financial sectors are already very deep. Here, complicated financial instruments, influential lobbyists, and excessive compensation in the banking industry can lead to a system that serves itself as much as it serves others."

The well-documented wealth inequality is not isolated to the U.S., but is replicated in the other of the nations in the Organization for Economic Co-operation and Development (OECD), an economic alliance of capitalist liberal democracies where finance capital resides. In OECD countries, "income and wealth inequality have reached or are near record highs," as Georgieva writes.

"In some ways, this troubling trend is reminiscent of the early part of the 20th century — when the twin forces of technology and integration led to the first Gilded Age, the Roaring Twenties, and, ultimately, financial disaster," Georgieva notes. "One issue which we did not face in the 1920s but which we face urgently today is climate change. It is often the poor and most vulnerable populations who bear the brunt of this unfolding existential challenge."

As a consequence, the IMF's managing director cited data from the World Bank that as many as an additional 100 million people will be living in extreme poverty by 2030. Consider that right now, we are in the midst of international refugee crisis, with over 70 million people who have been forcibly displaced — more than double the level 20 years ago.

Eric LeCompte is a noted United Nations finance expert and executive director of Jubilee USA, a non-governmental organization that presses for debt relief for the world's developing nations to enable them to direct their financial resources to social needs like public health, educations and infrastructure — in order to stave off the ill effects of climate change, like rising sea levels and the loss of farmland. In an interview, LeCompte said that the world has a tangible example of debt relief making a major difference.

"Because of some of the debt relief campaigns we have won over the years in the 2000s we relieved a lot of debt that African countries were holding and because of that it led to  great economic growth that in 2008 insulated Africa from much of the rest of the financial crisis," he said. "In sub-Saharan Africa this meant that 54 million kids went to school who would have never seen the inside of a classroom."

LeCompte makes the case that the connection between debt, wealth inequality and accelerating climate change is not abstract.

"All we have to do is look at Ecuador, that's in the throes of a massive debt crisis," he said. "Right now, they are auctioning off about a third of their rainforest, and China is buying it because Ecuador is deeply indebted to China . . . it is essentially transferring in wealth [from] the vital rain forest" to ready it for oil exploration.

He continued: "This is happening in countries across the world. Right now, according to the IMF more than 40 percent of developing countries are either in debt crisis, or in serious debt distress."

If we really want to deal with climate change, it means dismantling this global debt machine that only accelerates wealth concentration and serves itself at the expense of planetary well- being.