"I stand with Greta on this issue," the ex-actress wrote on Instagram. "I don't have a degree in economics either" 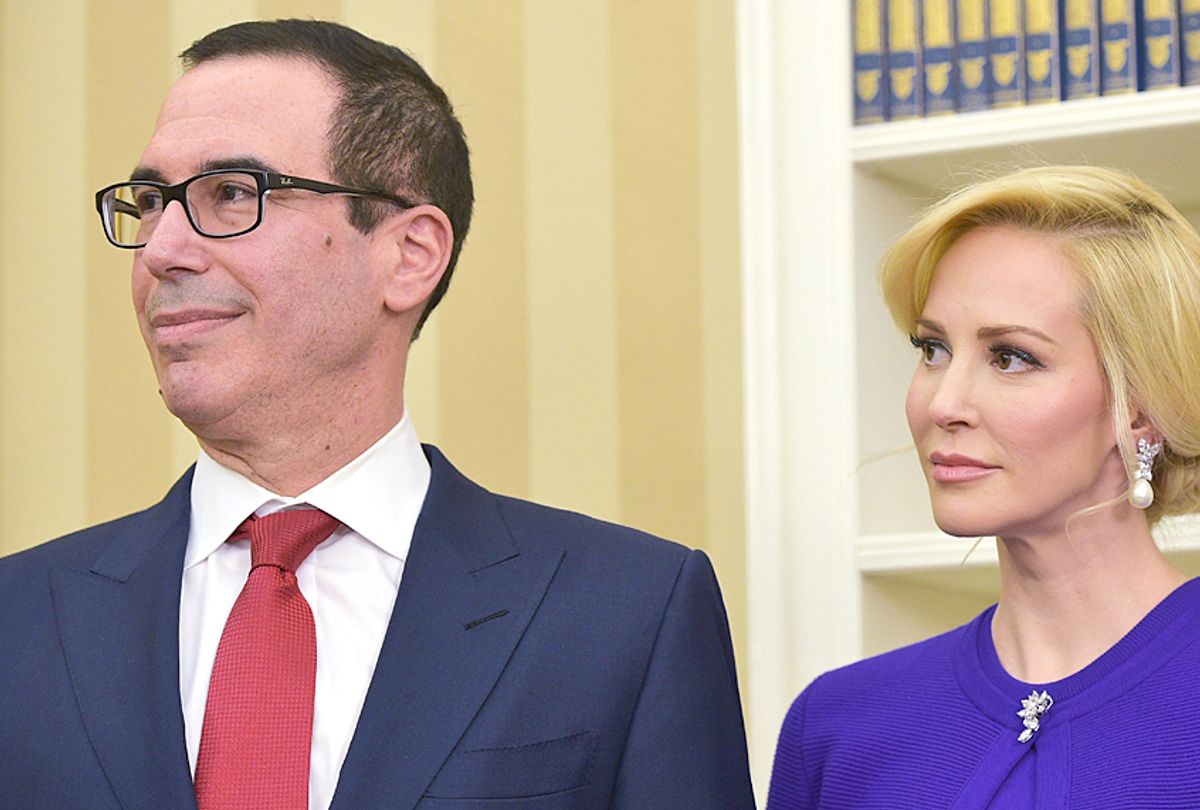 "I stand with Greta on this issue. (I don't have a degree in economics either.) We need to drastically reduce our use of fossil fuels. Keep up the fight @gretathunberg," Linton posted Saturday alongside a split-screen image of Thunberg and her husband. She later deleted the post.

Mnuchin aroused controversy last week after he told reporters at the World Economic Forum in Davos, Switzerland, that he did not consider the outspoken Thunberg to be a legitimate critic of fossil fuel investments.

"After she goes and studies economics in college, she can come back and explain that to us," Mnuchin said, though he added that his remarks were a joke.

One of the reforms that climate change activists support is completely divesting from fossil fuels. When asked about Thunberg's stance on the subject, Mnuchin asked reporters: "Is she the chief economist? Or who is she? I'm confused."

"Steve Mnuchin suggested that Greta Thunberg should go to college and study economics before offering policy advice. Perhaps Steve Mnuchin should go back to college and study environmental science before he enacts additional environment-destroying policies," Ken Caldeira, an atmospheric scientist at the Carnegie Institution for Science's Department of Global Ecology, told Salon by email in response to Mnuchin's remarks.

This is not the first time Linton has courted controversy through her use of Instagram. She was heavily criticized in 2017 for her response to an comment from an Oregon women, who called the actress out for taking a day trip to Kentucky on a military jet and boasting of the various high-end fashion labels she wears.

"Glad we could pay for your little getaway," the woman wrote, adding the hashtag "deplorable."

Linton wrote back, "Aw!!! Did you think this was a personal trip?! Adorable! Do you think the US govt paid for our honeymoon or personal travel?! Lololol. Have you given more to the economy than me and my husband? Either as an individual earner in taxes OR in self sacrifice to your country?"

She added, "I'm pretty sure we paid more taxes toward our day 'trip' than you did. Pretty sure the amount we sacrifice per year is a lot more than you'd be willing to sacrifice if the choice was yours."

Linton later apologized for the comments, saying that she had acted like a "bozo." The nonprofit watchdog group Citizens for Responsibility and Ethics in Washington called for an investigation into the flight, noting that it seemed to have coincided with the path of a solar eclipse and therefore could have arguably been used for personal purposes rather than professional ones.

CREW's communications director Jordan Libowitz told Salon at the time that "it would have been highly unlikely that we would have noticed this without" the controversy aroused by Linton's original comments. The Treasury Department's Office of Inspector General eventually decided to review the flight.

Linton has also been criticized for her 2016 book "In Congo's Shadow," where she seemed to perpetuate a patriarchal form of racism while describing her experiences taking a gap year in 1999 in Zambia. She claimed that she became a "central character" in the Congolese war of the late 1990s and was afraid of what they would do to a "skinny white muzungu with long angel hair."

She later added, "Now that I'm a grown woman living in California and pursuing a very different dream — as an actress and film producer — I know that the skinny white girl once so incongruous in Africa still lives on inside me. Even in this world where I'm supposed to belong, I still sometimes feel out of place. Whenever that happens, though, I try to remember a smiling gap-toothed child with HIV whose greatest joy was to sit on my lap and drink from a bottle of Coca-Cola."

Linton also attempted a career as an actress and is best known for playing the character Deputy Winston in the 2016 shot-for-shot remake of the 2002 horror cult classic, "Cabin Fever.