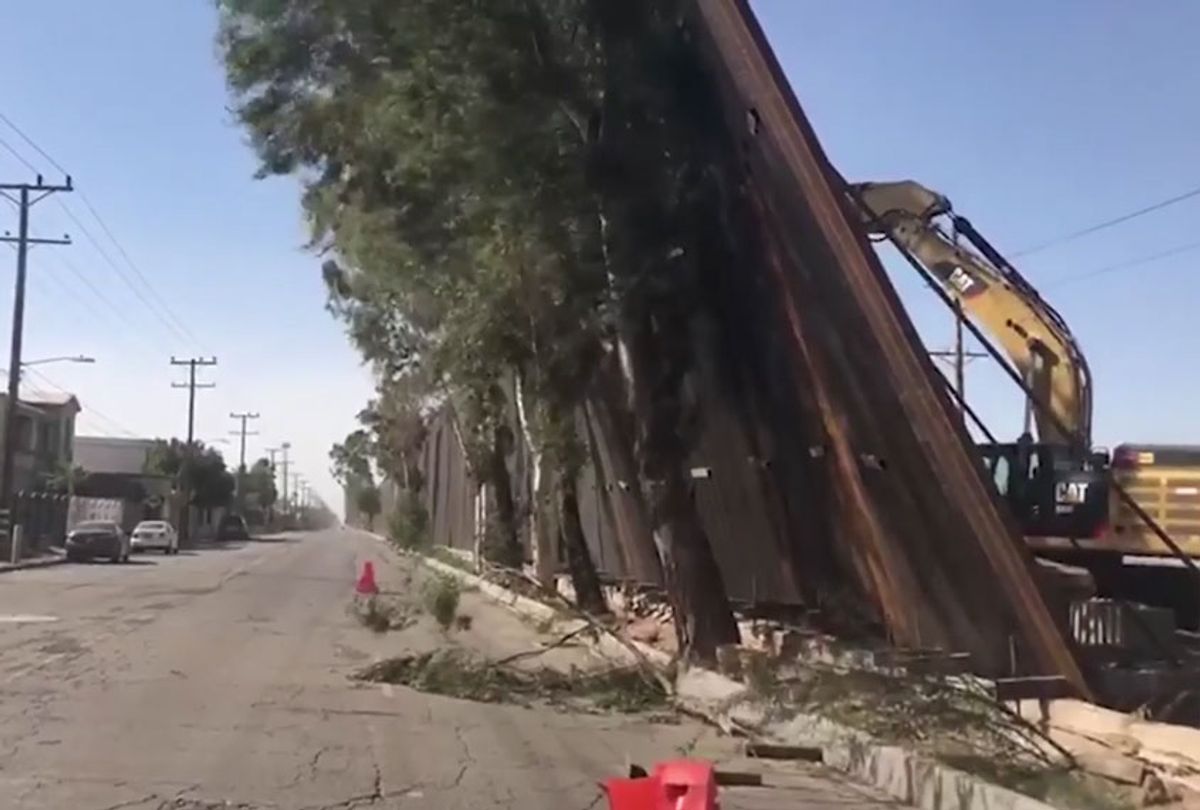 The border wall falls over in the wind (KYMA)
--

Viral video footage showed the wind toppling over sections of President Donald Trump's border wall Wednesday, one day after he bragged to a crowd of supporters in New Jersey that "we are now building that beautiful wall."

Mexicali police confirmed that a portion of the wall roughly 130 feet in length fell in Imperial Country, Calif., shortly before 12 p.m. local time. The impacted wall landed on some trees, which stopped it from hitting the ground, according to KYMA/KECY News. Customs and Border Patrol (CBP) Agent Carlos Pitones told CNN that the sections of the wall were recently set in a new concrete foundation in the California community of Calexico. Because the concrete had not yet cured, the wall panels were not able to withstand wind gusts, which reached as high as 37 mph Wednesday.

"We are grateful there was no property damage or injuries," Pitones said.

The CBP also downplayed the significance of the fallen wall, telling USA Today that it was an "uncommon event."

"The border wall system is imperative to securing the border and is what border patrol agents have asked for and need to maintain operational control of the southern border," it said.

When Trump announced his 2016 presidential campaign, he promised to build "a great great wall on our southern border" and to "have Mexico pay for that wall." Since that time, he has been unable to get Mexico to do so. Trump has also had to pare down expectations for his wall, from promising to build a wall along the entire 1,954 mile U.S.-Mexico border to only 450 miles of barriers. As of earlier this month, the administration had just managed to reach the 100-mile mark in border wall construction.

Some of Trump's critics took to Twitter to ridicule the fact that part of the wall had fallen.

"A piece of the border wall toppled over on Mexican side. I guess Mexicans wanted their property back. They paid for it, after all," "View" co-host Ana Navarro-Cárdenas tweeted.

Billionaire philanthropist Tom Steyer, who is running for the 2020 Democratic presidential nomination, tweeted a Trump quote in ironic juxtaposition to the wall toppling: "I own buildings. I'm a builder; I know how to build. Nobody can build like I can build. Nobody. And the builders in New York will tell you that. I build the best product."

Actor George Takei tweeted, "And the hits just keep coming, eh, Donald?" Actress Alyssa Milano posted a similar tweet, writing that "this is not an Onion headline. Trump border wall between US and Mexico blows over in high winds."

This is not the first time that structural problems with Trump's wall have come to light. In November, it was revealed that a reciprocating saw, a popular cordless power tool which can be purchased in many appliance stores, can be used to cut through the steel-and-concrete bollards that comprise the border wall in minutes.