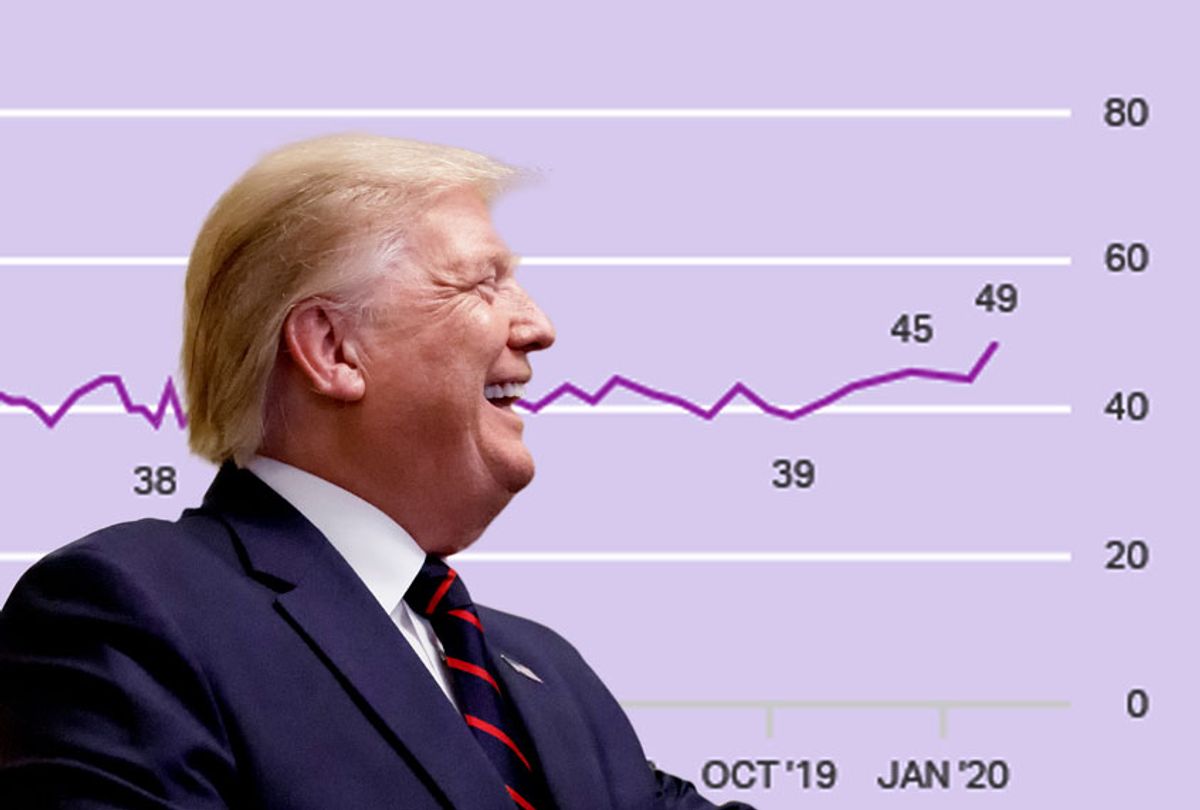 A new poll reveals that 49% of Americans approve of President Donald Trump's performance in office, the highest mark he has reached since taking office in January 2017.

The Gallup survey finds that 50% of Americans disapprove of Trump's performance as president; his approval rating increase can be attributed to improved standing among Republicans and independents. Since early January, Trump has risen from 88% to a 94% approval rating among Republicans, as well as from 37% to 42% among independents. Among Democrats, he drops to seven percent from last month's 10 percent.

A number of metrics cited by Gallup could account for Trump's improved poll standing. Sixty-three percent of Americans approve of how Trump has managed the economy, compared to 57% from a survey in November. Gallup's Economic Confidence Index sits at +40, its highest recorded reading since +44 in October 2000. National satisfaction is at 41 percent, the highest since 2005. Fifty-three percent of Americans approve of Trump's decision to kill Iranian military official Qassem Soleimani, while 45% disapprove.

"The Gallup poll showing Trump at 49 percent is likely an outlier, but it does fit in a broader pattern of respected national polls showing Trump's approval surpassing 45 percent and getting within shouting distance of 50 percent," Kyle Kondik, managing editor of the University of Virginia Center for Politics Sabato's Crystal Ball, told Salon by email. "I do wonder if Trump's better approval polling will last once impeachment ends – he may be benefiting from a motivated GOP electorate – but if it does last beyond impeachment, the president's reelection standing improves. If he's over 45 percent consistently – and he's not there yet – his path to reelection gets smoother."

The president expressed satisfaction with his polling results.

"My Approval Rating in the Republican Party = 95%, a record! Big Iowa win. Approval Rating overall = 53%, a new high. With our great Economy and other major successes, would be 20 points higher without the phony Witch Hunts and Hoaxes???" Trump tweeted Tuesday after the results came out.

It is unclear what role, if any, the impeachment proceedings have had on the president's approval rating. The survey finds that 52% of Americans want Trump to be acquitted, while 46% support convicting and removing him from office. The previous president to be impeached, Bill Clinton, saw his numbers rise as the scandal dragged out while Americans supported his stewardship of the economy and remained skeptical of the grounds on which he was impeached.

Trump was impeached for abuse of power and obstruction of Congress after it was revealed that he withheld $391 million in military aid from Ukraine while pressuring its president to announce investigations into his political rivals. While the White House claims that there was no quid pro quo,  critics have accused the president of trying to extort a foreign country into helping him win an election.