First lesson of the Iowa meltdown: Don’t entrust democracy to the techies

Inserting computers into the voting process makes democracy more opaque. Why do politicians keep falling for it? 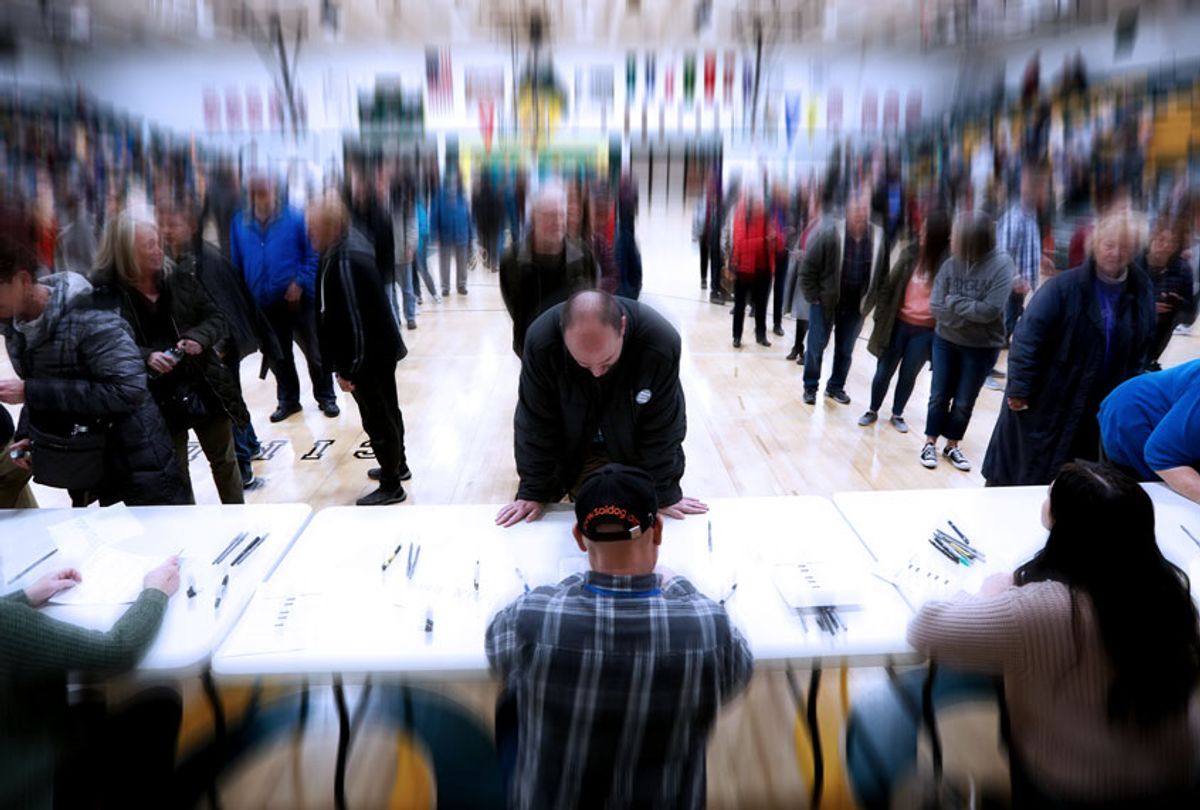 This meant that we, as chapter members, would vote on local issues through a website they had developed, which required some kind of login code that we were given if we attended a certain number of meetings; those meetings also required us to log in via a computer. The laptop sign-in system was easy to miss as you entered a meeting, as I and others did many times — but missing that step made us ineligible to vote on the direction of the chapter. This is all to say the system was a headache and made what should have been a simple problem — how to discuss and debate marching orders for the chapters — into an overly complicated mess.

If this timeline sounds confusing, that is because it most definitely was: These young people had absorbed the belief that using computers to do as much as possible would instantly make everything easier and more seamless. This belief system had become hegemonic, such that even when there was considerable evidence to the contrary — that, say, pen and paper was simpler and easier, or that they were spending loads of time coding and tinkering that could have been spent on better things — they were not dissuaded from using their coding and developing skills. It was all they knew.

My experience with this local debacle reminded me very much of what we saw in Iowa last night — with "inconsistencies" in results that were apparently related to the brand-new app used to report results. As Igor Derysh wrote in Salon on Tuesday morning:

"We found inconsistencies in the reporting of three sets of results," Iowa Democratic Party communications director Mandy McClure said in a statement. "In addition to the tech systems being used to tabulate results, we are also using photos of results and a paper trail to validate that all results match and ensure that we have confidence and accuracy in the numbers we report."

"The app did not go down and this is not a hack or an intrusion," the statement said.

Despite the party's insistence that the new app was not to blame, numerous caucus officials and campaign aides pointed to the app for causing the delay.

"The app is f*cking up," a senior Democratic campaign aide told NBC News. "Can't trust the numbers coming in."

Evidently the Iowa Democratic Party, like my local progressive political group, believed in every fiber of its being that computers would make everything better; indeed, that everything involved in the Iowa caucuses should be computerized (or smartphone-ized, as it were). It is a belief system that is known as "computationalism." David Golumbia, a professor at Virginia Commonwealth University who has written extensively about computationalism, previously described the ideology to me as a "quasi-religious truth."

"You frequently find people who avoid formal education for some reason or another and then educate themselves through reading a variety of online resources that talk about this, and they subscribe to it as quasi-religious truth, that everything is a computer," Golumbia told me in our earlier conversation. "It's appealing to people who find the messiness of the social and human world unappealing and difficult to manage."

"There's frustration . . . expressed when parts of the world don't appear to be computational, by which I mean, when their actions can't be represented by algorithms that can be clearly defined," he continued. That sounds a lot like what happened in the Iowa caucuses — in which a group of programmers hired by the Iowa party asked themselves how to computerize the caucuses, and then apparently programmed themselves into the mire.

This idea has trickled into the fiber of the Democrats' worldview, and to some extent the Republicans' too. Both parties fetishize Silicon Valley, and kowtow to its CEOs and entrepreneurs on the regular. Indeed, computationalism is not merely why an under-tested, undercooked app was rolled out in one of the most-watched political competitions of the year. It's also why Pete Buttigieg earnestly sought the support and advice of Mark Zuckerberg, CEO of one of the most disgraced and scandal-ridden companies on Earth. It is why municipalities give carte blanche to tech companies to come into their cities and undemocratically remake them as they please. And it is why we saw the incompetence of Shadow Inc. and its developers on display last night in Iowa.

There are myriad problems with the computationalist mindset. First, it enables malfeasance and incompetence, as we saw in Iowa. Pen and paper, on the other hand, are tried-and-true tabulation methods that are not hackable and do not require thousands of hours of labor to construct the digital infrastructure to use them. Second, computers are opaque: A layperson cannot audit the code of an app or website and determine if it is being manipulated by bad actors anywhere along the line.

Third, the computationalist mindset means that there is a double standard for how we treat tech companies and people who work in tech, as opposed to those who do not. Indeed, because of the computationalist worldview, many who work in tech earnestly believe they are changing the world or doing "good," as though merely writing code made one a moral person. This idea is exploited by tech giants who advertise their business as synonymous with progress, something they get away with because in Western civilization we frequently think of "technology" and "progress" as connected ideas.

But as we saw on Monday night in Iowa, they are not synonymous. Indeed, it would appear we have regressed. There are conspiracy theories flying around about the Iowa situation, at varying levels of plausibility. Many have noted that Shadow Inc. was paid for services both by the Iowa Democratic Party and also by Pete Buttigieg's campaign. Shadow has a "close and intertwined relationship," according to Lee Fang's reporting for The Intercept, with a firm called Acronym, which was founded by Democratic operative Tara McGowan, whose husband is a senior strategist for the Buttigieg campaign. Early on Tuesday morning, Buttigieg gave a speech apparently declaring victory in Iowa, when there was no evidence he had won. Others have suggested that the Shadow app was deliberately sabotaged to slow the perceived momentum of Bernie Sanders, the candidate most feared by the Democratic establishment.

None of this, quite likely, adds up to anything more than a routine degree of Democratic Party internal self-dealing and a display of interwoven overconfidence and incompetence. But the opaque nature of programming and app development means that doubt and elaborate conspiracy theories are almost impossible to dispel. Indeed, some degree of justifiable paranoia will always be present in the absence of the transparency provided by a paper trail. It scarcely needs to be said that the proliferation of conspiracy theory serves Donald Trump's interests, and is highly corrosive to the public faith in democracy.