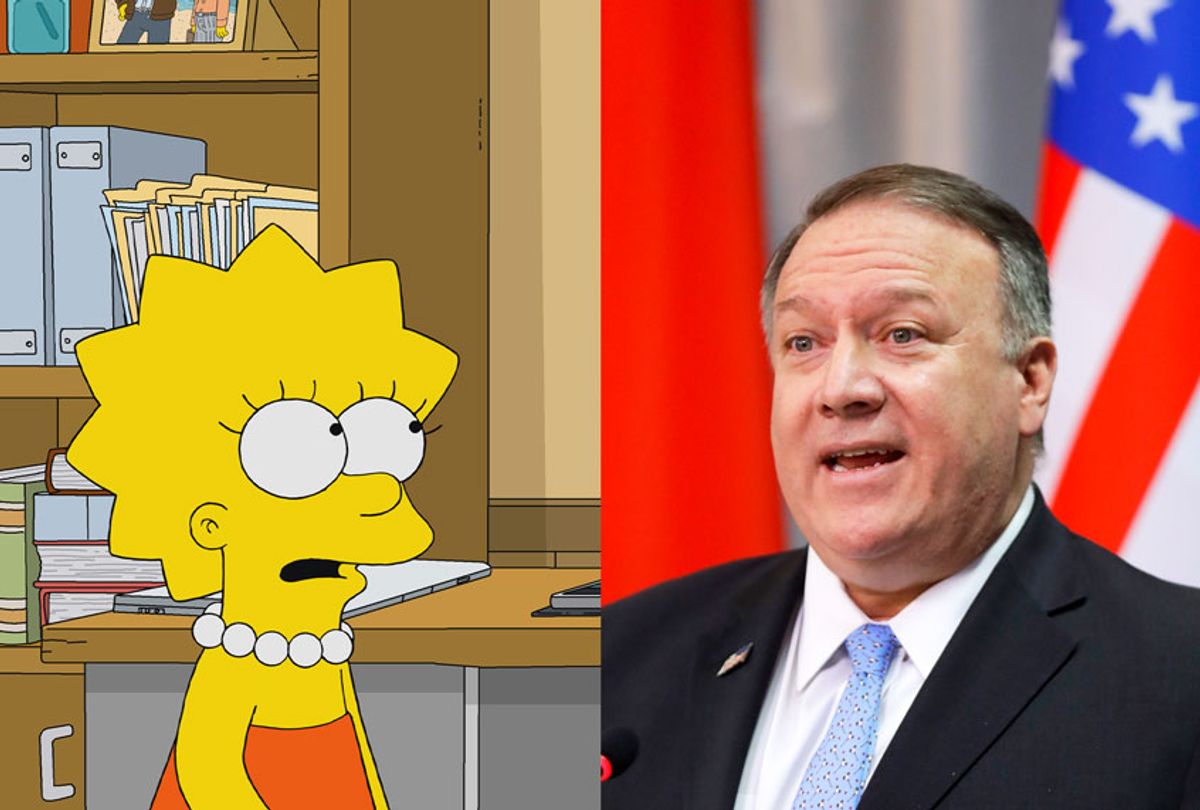 Bill Oakley, who worked for "The Simpsons" in a variety of creative roles from 1992 to 1998, took to Twitter on Wednesday morning to demand that Secretary of State Mike Pompeo not reference the show in his own tweets.

"Mr. Secretary of State please do not ever ever ever use Simpsons material in your twitter or watch the show or refer to it in any way," Oakley wrote. His post included a quote-tweet of Pompeo's original tweet, which showed "The Simpsons" character Lisa Simpson ripping up a piece of paper and crying.

Pompeo had chosen that image to mock Speaker of the House Nancy Pelosi, who tore up her copy of President Donald Trump's State of the Union address in front of cameras on Tuesday night. She later told reporters that "it was the courteous thing to do, considering the alternatives." Conservatives have criticized her for doing so, with the White House tweeting that she had ripped up "one of our last surviving Tuskegee Airmen. The survival of a child born at 21 weeks. The mourning families of Rocky Jones and Kayla Mueller. A service member's reunion with his family." Vice President Mike Pence later appeared on "Fox & Friends" to claim that Pelosi's actions were "beneath the dignity" of her office and added, "I was not sure she was ripping up the speech or ripping up the Constitution."

The "Simpsons" episode that Pompeo referenced has an ironic subtext. In the Season 3 episode "Mr. Lisa Goes to Washington" that in 1991, Lisa tears up an essay she wrote about why she loves America after seeing her local congressman take a bribe from a logging lobbyist. Trump has emerged as a decidedly anti-environmental president during his tenure and has been impeached due to accusations that he tried to extort Ukraine into announcing an investigation into former Vice President Joe Biden, which if true could be construed as the equivalent of compelling a bribe.

Oakley — who served at various times as showrunner or in writing, producing and editing roles while working for "The Simpsons" — later clarified that the episode in question had not been made during his tenure there.

"(To be clear this episode aired before @Joshstrangehill and I even worked on the show and was written by the genius George Meyer and I say this to Mr. Pomepo as a FAN of this episode, not someone who worked on it. If he starts using Steamed Hams, then this will become personal.)" Oakley added in a follow-up tweet.

Pompeo is not the first Republican to be receive backlash for his reference to "The Simpsons." Sen. Ted Cruz of Texas has long been an outspoken fan of the show, from doing impressions and discussing characters to submitting a faux audition for the show. When he told a gathering at the Conservative Political Action Committee in 2018 that "I think the Democrats are the party of Lisa Simpson, and Republicans are happily the party of Homer and Bart and Maggie and Marge," showrunner Al Jean tweeted that "Ted Cruz says Maggie Simpson would vote for him. I think Ted's the one who could use a pacifier in his mouth."

On another occasion, after Cruz misquoted "Treehouse of Horror VI," Jean replied, "To paraphrase Kang, 'Ted Cruz?' Go ahead, throw your vote away."

Not all of the Republican politicians who have had scraps with "The Simpsons" did so because they liked the show. President George H. W. Bush famously delivered a speech in 1992 in which he said that American families needed to be "a lot more like the Waltons and a lot less like the Simpsons." In the episode following that speech, "The Simpsons" included a scene where the family watches a clip from Bush's speech, and Bart Simpson says, "Hey, we're like the Waltons. We're praying for an end to the Depression, too."

Four years later, the show referenced the incident again with an episode in which the Bushes move into an empty house across the street from the Simpsons. In 2017, Jean again criticized Bush after he was accused of sexual harassment, tweeting, "I think George HW Bush should act more like the Waltons than the Simpsons. #25yearoldgrudge."