Nancy Pelosi rips up Trump's State of the Union address: “It was the courteous thing to do"

Mike Pence called Pelosi's move “beneath the dignity” of her office. Newt Gingrich called for her to be censured 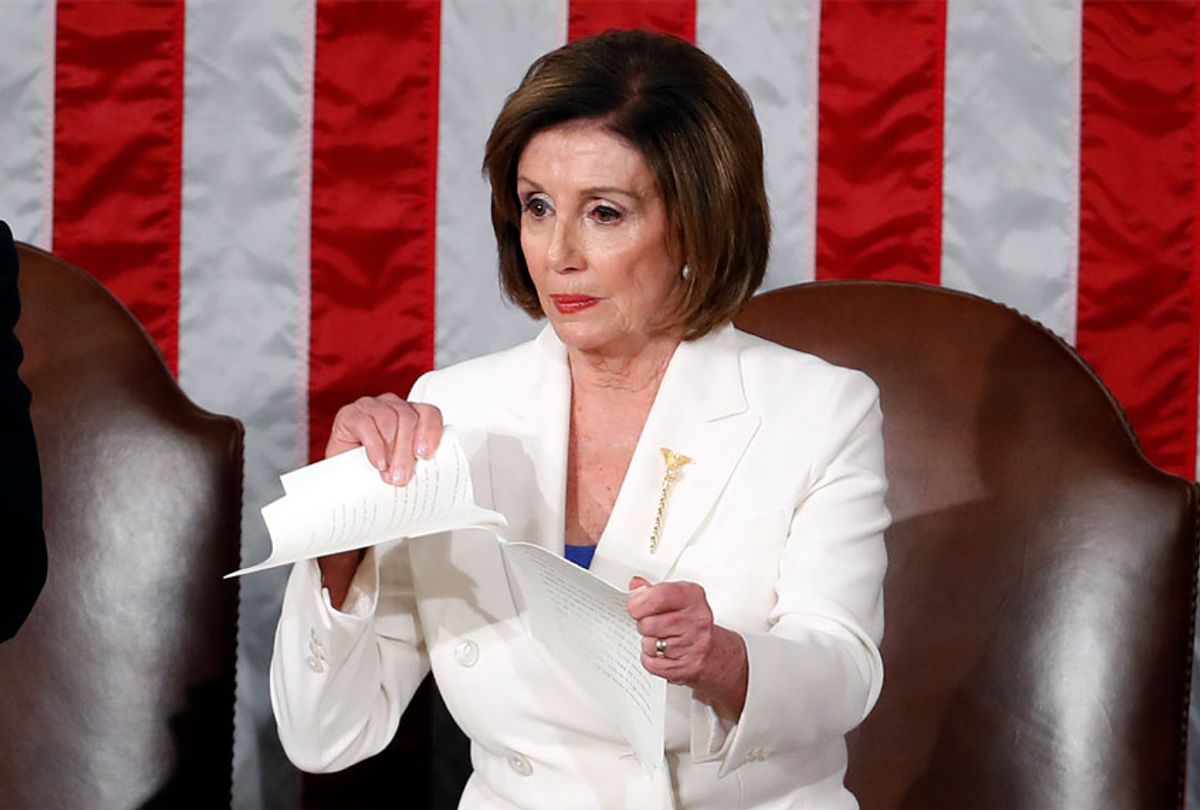 House Speaker Nancy Pelosi of Calif., tears her copy of President Donald Trump's State of the Union address after he delivered it to a joint session of Congress on Capitol Hill in Washington, Tuesday, Feb. 4, 2020. (AP Photo/Alex Brandon)
--

Conservatives fumed after Speaker of the House Nancy Pelosi, D-Calif., ripped up a printed copy of President Donald Trump's State of the Union address after he finished his remarks Tuesday night.

Pelosi's move was one in a series of events underscoring the tensions between the president and the the Democratic leader, who had not seen each other in person since she walked out of a White House meeting about Syria on Oct. 16.

When introducing Trump, Pelosi did not include the customary description of it being a "high privilege and distinct honor" to do so. The president turned his back to Pelosi when she reached out to shake his hand before he delivered his address.

Pelosi could be seen mouthing "not true" at various moments during Trump's address, smiling in disbelief as the president falsely claimed that he had protected insurance for pre-existing medical conditions and shaking her head when he described her home state of California as "a very terrible sanctuary" in racist comments about undocumented immigrants.

After he was done with his speech, Pelosi ripped up the text in full view of cameras.

When asked why she had decided to rip up the speech at the end of Trump's address, Pelosi told a reporter that "it was the courteous thing to do, considering the alternatives."

In response to Pelosi's actions, the White House tweeted that "Speaker Pelosi just ripped up: One of our last surviving Tuskegee Airmen. The survival of a child born at 21 weeks. The mourning families of Rocky Jones and Kayla Mueller. A service member's reunion with his family. That's her legacy."

Vice President Mike Pence continued the administration's attacks on Pelosi the next morning on "Fox & Friends" when he claimed that her move was "beneath the dignity" of her office.

Former House Speaker Newt Gingrich also tweeted his disapproval of Pelosi's actions, writing: "I am disgusted and insulted by the viciously partisan action of Nancy Pelosi tearing up the speech. She isn't clever or cute her childishness insults our American traditions -should be censured."

This is not the first time that Pelosi has drawn attention for appearing to throw shade at Trump during a State of the Union address. When Trump spoke about ending "the politics of revenge" during his 2019 address, Pelosi stretched out her arms and clapped loudly. The result was a viral meme. Some conservatives perceived her actions as deliberately insulting to the president, though Pelosi insisted that she was not being sarcastic.

"Look at what I was applauding," Pelosi told reporters at the time. "I wanted him to know that was a very welcome message."

The president's State of the Union address was delivered amid his ongoing impeachment trial in the Senate. The speech denounced Medicare for All and included a call for improved infrastructure. Trump also courted controversy by awarding a Presidential Medal of Freedom to Rush Limbaugh, who has a long history of racist and sexist remarks. The conservative radio host announced Monday that he had been diagnosed with Stage 4 lung cancer.