"I may not be correct on that," Collins tells Fox News. "It's more aspirational on my part" 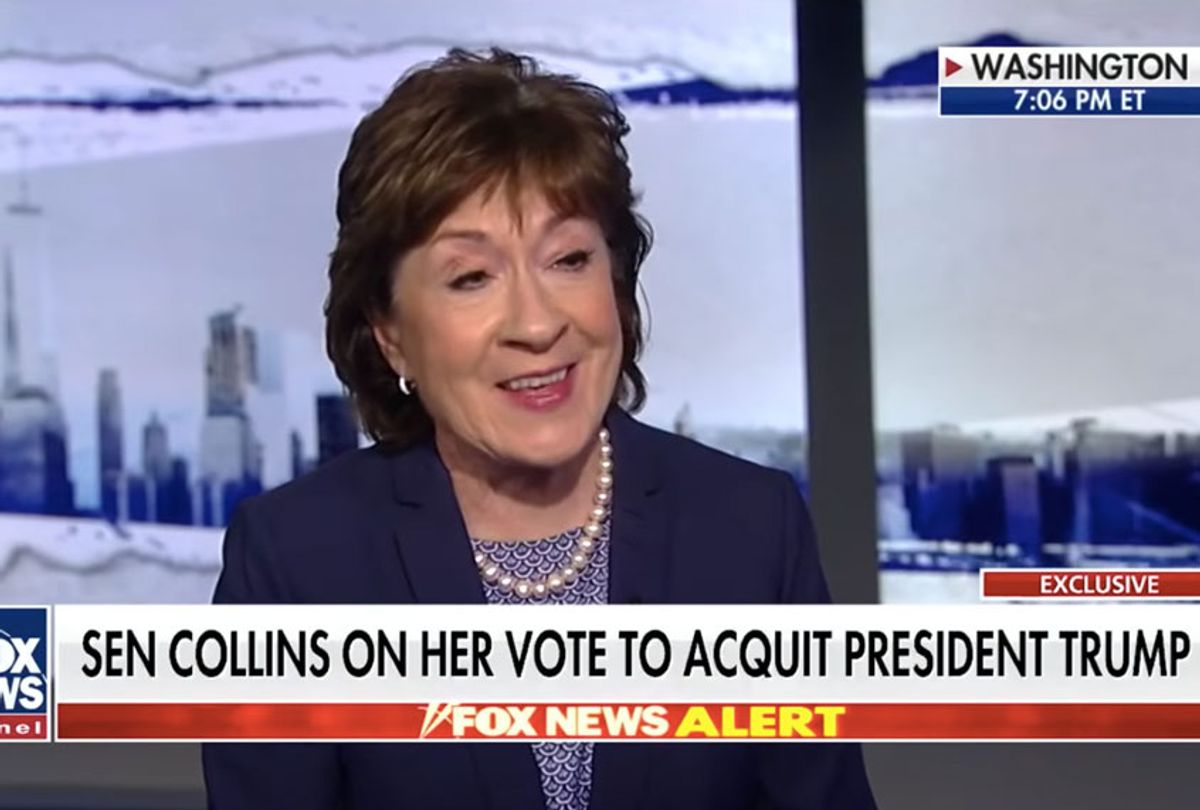 Sen. Susan Collins, R-Maine, admitted her claim that President Donald Trump had learned his "lesson" was merely "aspirational" following her vote to acquit him on both articles of impeachment.

Collins defended her intention to vote to acquit Trump by arguing that although the president's actions were "wrong," they did not reach the "high bar" to warrant removal from office.

After voting with her party to acquit Trump despite criticizing the president's call soliciting Ukrainian President Volodymyr Zelensky to investigate his political rivals, Collins admitted that her remark was "aspirational" in an interview with Fox News.

Host Martha MacCallum pressed Collins on whether Trump gave her any "assurance" that he would be more cautious.

"So why do you have that feeling that he has changed — that he learned a lesson?" MacCallum asked.

"Well, I may not be correct on that. It's more aspirational on my part," Collins replied. "It's more that I hope that he's listened to the many voices in the Senate who have pointed out that the call was very problematic."

But Trump does not appear to have listened. After Collins' earlier comments, he against insisted that his conversation with Zelensky was a "perfect call." Trump demanded that his critics "read the transcript" of the call after Sen. Mitt Romney, R-Utah, voted to convict him on the abuse of power charge.

Romney, who became the first senator in history to vote to remove a president of his own party, argued on the Senate floor that Trump's actions did rise to the level of removal.

"The grave question the Constitution tasked senators to answer is whether the president committed an act so extreme and egregious that it rises to the level of a high crime and misdemeanor. Yes, he did," he said. "Were I to ignore the evidence that has been presented and disregard what I believe my oath and the Constitution demands of me for the sake of a partisan end, it would, I fear, expose my character to history's rebuke and the censure of my own conscience."

Collins agreed that the evidence showed Trump was wrong about his "perfect call," but said she and Romney "simply reached different conclusions on the vote."

"I hoped that the president would have learned from the fact that he was impeached by the House — even though I think that was a partisan move — but there were so many of us that were Republicans in the Senate that were very critical of the call," she said. "The call was wrong."

"He should not have done that. And I would hope that he would not do it again," she added. "The president should simply not do it again. Nobody wants to put the country through this again. There's a reason why we have never removed a president in all the years despite the provisions in the Constitution, because it's overturning an election. It says the voters no longer have the right to decide."

Collins is among the most vulnerable incumbent Republican senators up for re-election this year, especially after she was ranked the most unpopular senator in the country. Top Democratic challenger Sara Gideon, the speaker of the Maine House of Representatives, said Collins' defense of her vote shows "just how much she's changed" and added that Trump's behavior since the start of the impeachment proceedings shows "he hasn't learned anything at all."

"Based on the information included as part of the impeachment trial, I believe an abuse of power occurred, and I would vote to remove the president," Gideon said in a statement. "Her decision to acquit despite the case against the president and without hearing more of the facts again reveals her commitment to standing with [Senate Majority Leader] Mitch McConnell and Donald Trump. This was not the process that Mainers and Americans deserved, and Senator Collins was complicit in letting that happen."