Mitt Romney is lone surprise in 52-48 party-line vote to acquit: "I have no choice under the oath that I took" 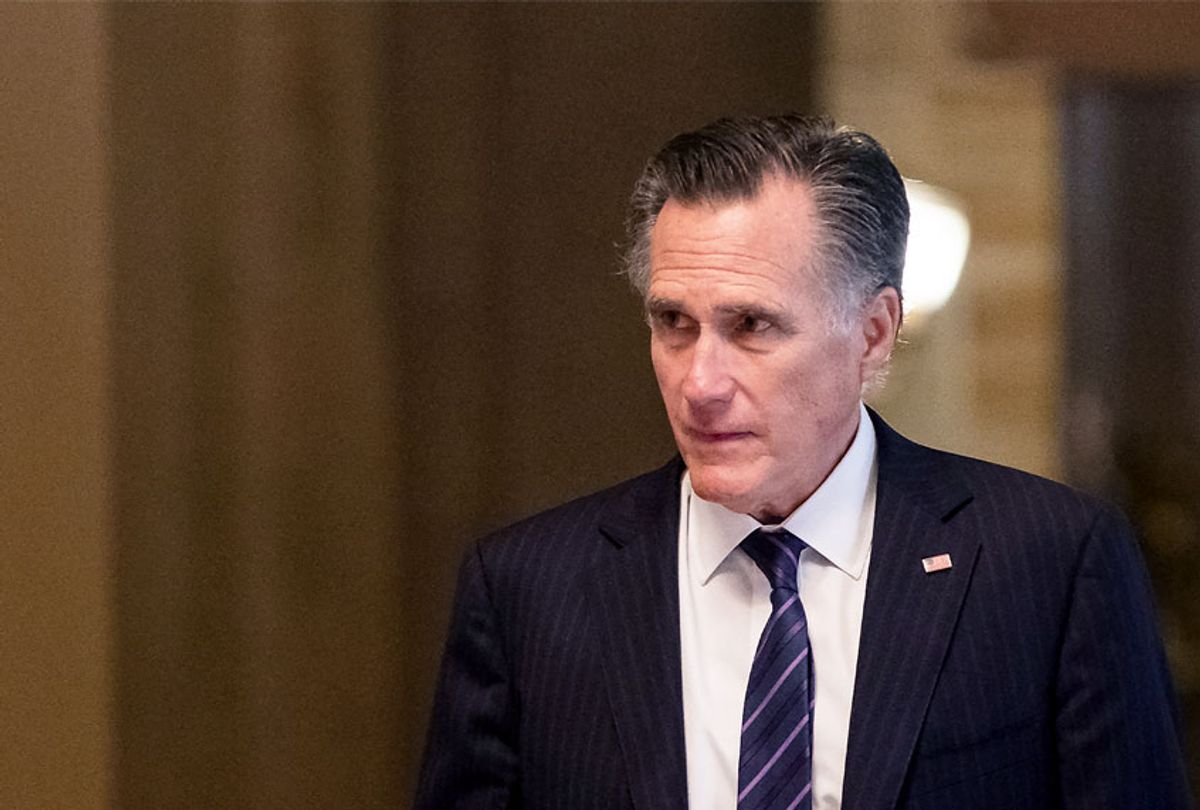 The Senate voted almost entirely along party lines to acquit President Donald Trump of both articles of impeachment brought against him by the House of Representatives.

All 53 Republican senators voted to acquit Trump on the charge of obstruction of justice, while Mitt Romney of Utah broke ranks and voted to convict Trump of abuse of power. All 47 Democrats (and Democrat-affiliated independents), including three moderates who seemed to be on the fence — Joe Manchin of West Virginia, Kyrsten Sinema of Arizona and Doug Jones of Alabama — voted to convict Trump on both charges.

The final vote was 48 to 52 on the abuse of power charge and 47 to 53 on obstruction of Congress charge. The Senate requires a two-thirds vote — 67 votes, with a full quorum — to remove the president from office.

Public opinion on the issue has been similarly split, with half of voters backing Trump's removal, according to polls from Fox News and CNN.

Trump was charged with abuse of power for pressuring the Ukrainian government to open investigations of Joe and Hunter Biden by withholding military aid appropriated by Congress. He was charged with obstruction of Congress for refusing to provide documents or allow witnesses to testify during the House impeachment inquiry. The earlier House vote similarly fell down party lines, with nearly all the Democratic majority voting to impeach the president

"I think the case was made," Romney told The New York Times ahead of the vote. "I believe that attempting to corrupt an election to maintain power is about as egregious an assault on the Constitution as can be made. And for that reason, it is a high crime and misdemeanor, and I have no choice under the oath that I took but to express that conclusion."

Romney is the first senator in U.S. history to vote to convict a president of his own party.

Romney later told Fox News' Chris Wallace that he is prepared to face political backlash for his vote.

"I've got broad enough shoulders to weather personal changes in my career, political or otherwise," he said. "But what I don't have is the capacity to ignore my conscience."

Sen. Doug Jones, D-Ala., one of the most vulnerable Democrats facing re-election in a deep red state this year, also voted to convict Trump.

"After many sleepless nights, I have reluctantly concluded that the evidence is sufficient to convict the president for both abuse of power and obstruction of Congress," he said. "Impeachment is the only check on such presidential wrongdoing."

Manchin, the last Democrat to announce he would vote to convict, said it was "a truly difficult decision" that he made "reluctantly." Manchin made his announcement just minutes after Vice President Mike Pence predicted in a radio interview that Trump will "likely be acquitted with a bipartisan vote of the United States Senate."

"The evidence presented by the House Managers, including video testimony of witnesses under oath in the House of Representatives, clearly supports the charges brought against the President in the articles of impeachment," Manchin said in a statement.

Sinema, who did not announce how she would vote until minutes before the roll call, said it was clear that Trump had broken the law.

"Today, I vote to approve both articles, as my highest duty, and my greatest love, is to our nation's Constitution," she told the Arizona Republic. "The facts are clear; security aid was withheld from Ukraine in an attempt to benefit the president's political campaign. While White House attorneys claim this behavior is not serious, it is dangerous to the fundamental principles of American democracy to use the power of the federal government for personal or political gain."

Democrats argued during the trial that Trump's acquittal would embolden him to try to cheat again in the upcoming presidential election by soliciting foreign assistance. Some Republicans argued that Trump did nothing wrong, while a few have acknowledged his guilt but argued that the misdeeds did not rise to the level of removal.

Sen. Lamar Alexander, R-Tenn., called Trump's behavior "inappropriate" but argued that "the Constitution does not give the Senate the power to remove the President from office and ban him from this year's ballot simply for actions that are inappropriate."

"His personal interests do not take precedent over those of this great nation," she said, before vowing "not to disenfranchise nearly 63 million Americans and remove him from the ballot."

Sen. Rob Portman, R-Ohio, similarly argued that the president should not be removed from office during an election year even though "I don't condone this behavior."

Sen. Joni Ernst, R-Iowa, who faces a difficult re-election battle this year, said Trump acted "in the wrong manner" but argued it did not rise to an impeachable offense, "whether you like what the president has done or not."

Sen. Susan Collins, R-Maine, perhaps the most endangered Republican incumbent in the 2020 elections, argued that impeachment in the House had been a sufficient punishment.

The impeachment trial is now over, but that does not mean that lawmakers are finished investigating Trump's actions in Ukraine. House Judiciary Commitee Chairman Jerry Nadler said ahead of the vote that his committee is "likely" to subpoena former national security adviser John Bolton, whose leaked book manuscript linked Trump's demand for Ukraine to investigate the Bidens directly to the aid freeze.

"I think it's likely, yes," Nadler said. "When you have a lawless president, you have to bring that to the fore, you have to spotlight that, you have to protect the Constitution despite the political consequences."

Of course, Republicans plan to go on offense as well. Senate Judiciary Committee Chairman Lindsey Graham vowed that he and his colleagues would investigate the Bidens and the anonymous whistleblower whose complaint led to Trump's impeachment.

"I want to know how all this crap started … If the whistleblower is a former employee of — associate of — Joe Biden, I think that would be important," he told Fox News. "I'm gonna bring in State Department officials and ask them, 'Why didn't you do something about the obvious conflict of interest Joe Biden had?'"

Despite Collins' prediction that Trump learned his lesson, Trump attorney Rudy Giuliani declared on NPR on Tuesday that he is still hunting for dirt on Biden in Ukraine, precisely the actions that led to the president's impeachment in the first place.

"He hasn't told me not to do it," Giuliani said of the president.

Trump similarly rejected Collins' claim that he learned his lesson, arguing to news anchors on Tuesday that he did "nothing wrong." He once again defended his telephone conversation last July with Ukrainian President Volodymyr Zelensky, saying, "It was a perfect call."