"Tommy" is bracing and earnestly woke, maybe even too much for CBS' audience 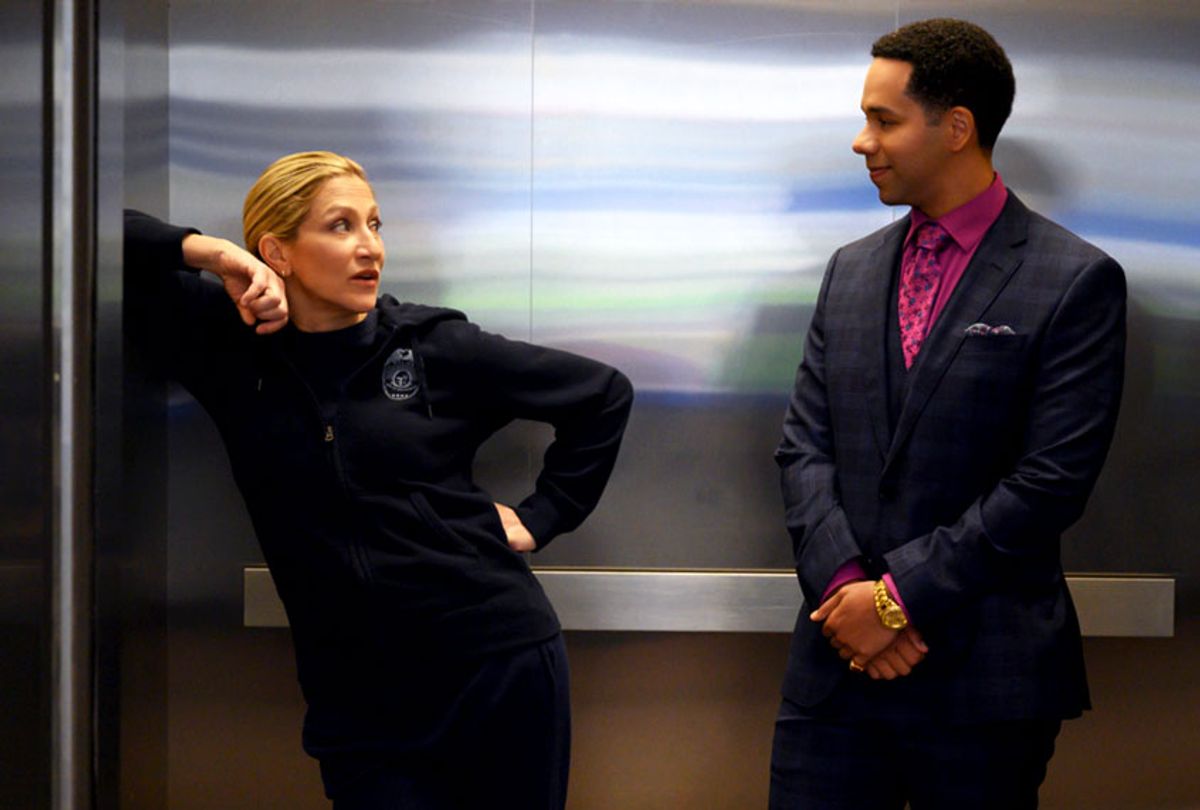 Edie Falco has a talent for channeling a presence that allows whatever woman she's playing to own whatever hostile space the series' writers drop her into. "Sopranos" and "Nurse Jackie" people know what this is – it's that look she wears in the scenes where Carmela or Jackie must convey a sense of endurance, that under no circumstances can she fail.

"Tommy," the new CBS drama in which she plays Los Angeles' first chief of police Abigail "Tommy" Thomas, takes advantage of that straightaway by thrusting her character into the center of what could evolve into a riot between anti-immigration aggressors and a group that wants to protect a little girl and her mother caught between them.

Tommy presses into the eye of that rage, her face a swirl of determination, weariness, and the slightest hint of trepidation, enough to remind us of her vulnerability. And if this midseason drama catches on, Falco's steel deserves much of the credit for making that sale.

The catch is that "Tommy" is quite intentionally a socially conscious construction, and while that's not necessarily to its detriment, its earnest approach to inclusion can at times get in the way of a viewer's ability to appreciate its worth as a solid character-driven procedural.

I'll be the first admit that's an odd observation for a critic often dismissed in various comments sections as a "social justice warrior" to make. (As if that's a pejorative!) But please don't misinterpret that pronouncement as some sort of philosophical about-face.

Every producer and showrunner who intentionally prioritizes inclusive casting and storytelling should be celebrated and encouraged. And "Tommy" executive producer Tom Szentgyorgyi went to great lengths at a recent Television Critics Association-hosted press event to let reporters know he's genuine.

According to Szentgyorgyi, "Tommy" grew out of its creator Paul Attanasio noticing that none of America's major cities (New York, Chicago, and Los Angeles) has ever had a woman serve as chief of police.  Thus in order to create the show's world, he and Szentgyorgyi built a writers room that's evenly split between men and women. Half of the writers identify as LGBTQ. Two are African American, which is worth citing in a genre that's been recently called out for its stark lack of Black representation within its writing staffs.

However, my hesitancy to applaud the multiple layers of social justice signaling playing out in each week's episode is born of out of years of experience with both CBS and its audience.

On paper "Tommy," a crime procedural that follows a case of the week format, should fit in with the rest of the network's prime time just fine. For good measure it also introduces an overall seasonal arc meant to explore corruption. However, at no point do we forget that this is also very much a social and political issues-driven drama placed in front of an audience programmed to digest very simple tales of crime and punishment reassuring them that our systems of justice, politics and societal structure, work exactly as they should.

Falco's Tommy immediately shoves a plank into the eye of that illusion simply by stepping into the room. The New York transplant enters her position in Los Angeles under a cloud of scrutiny for the usual reasons, and because of expectations placed upon her to make up for the substantial sins of her predecessor Milt Leakey (Corbin Bernsen), who topped off his standard-issue sexual harassment record by allegedly running a prostitution ring.

And Tommy is acutely aware of the situation, as is everyone around her. The first public statement that LA's mayor Buddy Gray (Thomas Sadoski) makes is crafted to cover up for the truth of what led to Tommy's hire, which is that a federal judge mandated it.

Immediately, then, the establishment expects her to be ill-equipped for the job and flame out quickly. Behind her back and well within stabbing range, Deputy Mayor Doug Dudik (Joseph Lyle Taylor) conspires with Leakey to bring her down, setting lures for a variety of political traps.

Fortunately her team of insiders, including Blake Sullivan ("Rectify" star Adelaide Clemens), speechwriter Ken Rosey (Michael Chernus of "Orange Is the New Black") and her right-hand man Abner Diaz (Vladimir Caamaño), are firmly on her side, some of them knowing their careers can only rise with her success.

Other members of the old guard like Chief of Staff Donn Cooper (Russell G. Jones) know the system well enough to keep their heads down, making them useful barometers for Tommy to consult when she faces tactically perilous decisions.

"Tommy" is at its best when it exposes myths about affirmative action simply by having the character say aloud and act out what's required of all marginalized people elevated to positions of power to which few, if any, of their gender, ethnicity or class have ever had access. That is, Tommy knows that she must not only succeed at her job, but be extraordinary at it. Her failure, she tells an ally and viewers at home who might not be clear on the stakes here, means that another woman won't get her job for many years.

However, while the best stories starring a member of a minority let the audience know they're aware of how the world sees them without, say, making the story entirely about that, the episodes of "Tommy" provided for review unsubtly pickle us in her identity.

Some of this is a matter of hurried exposition; Szentgyorgyi and his writers must feel the pressure of creating a midseason show in an environment and on a network where such series don't have a great survival rate. And this urgency translates into jamming as much about Tommy's life and the situations the LAPD faces in the course of enforcing the law in one of America's most diverse cities.

Hence straight off the bat, the characters around her establish that Tommy is not only the first female police chief of the LAPD, she's also a sexual assault survivor and lesbian who is the mother of a biracial daughter (Olivia Lucy Phillip) from whom she is estranged due to her choice to place career over motherhood.

Her ex-husband, by the way, is a smoking hot star of a zombie show. This series is nothing if not hooked into the zeitgeist. And within the first three episodes, "Tommy" wrestles with immigration, the over-policing of the Black community, sex trafficking, and a case with #MeToo overtones.

That last bit in particular might raise a bit of skepticism among people keeping up CBS' continuing efforts to deal with active landmines left behind after the ouster of former CBS chief Les Moonves. Moonves famously got the boot when CBS' board could no longer ignore allegations of sexual harassment dating back decades. So yes, such viewers are right to be skeptical about the larger purpose "Tommy" is meant to serve in terms of its image rehabilitation.

That is, as far as the general public even believes such a thing may be warranted. Attanasio also created "Bull," a drama whose star Michael Weatherly and showrunner Glenn Gordon Caron created a hostile work environment for and eventually fired cast member Eliza Dushku after she reported Weatherly for sexual harassment. (CBS paid Dushku $9.5 million to settle a civil complaint she subsequently brought against the network.) Despite this case being widely reported, "Bull" is still one of the network's most popular series, proving CBS viewers either aren't aware of its star's misdeeds or much more likely, simply do not care.

Wearing its social justice themes on its sleeves makes it impossible to ignore the issues "Tommy" would have its audience grapple with, making it an admirable effort to engage people otherwise inclined to tune out any content that illustrates system inequity or "wokeness."

Making the focal point of that discussion not merely a white woman, but a woman played by an acclaimed top-tier actress largely associated with premium cable drama, also is a savvy sneak attack on the part of the producer and the network.

That point applies to the ensemble surrounding Falco, too. Sadoski, who lends a dubious whiff of political cunning to his youthful mayor, is a wonderful actor familiar to HBO viewers thanks to his time on "The Newsroom."  Clemens' talented, ambitious PR flak is a strong coffee jolt to the three other people out there who watched "Rectify" and remember her as gentle Tawney.

On the other end of the spectrum, Corbin Bernsen is network TV royalty, a familiar face people love and may very happily love to despise.

They and Caamaño's quick-witted, merrily stoic Diaz take the sharp dialogue provided to them and spin it into enjoyable and enthralling performances that hopefully carry "Tommy" past its initial cannon bombardment of crusading.

Then again we could well discover that "Tommy" is precisely what the CBS audience has been waiting for, a show that illustrates the systemic ills tearing apart our social and cultural fabric, therefore explaining why so many people are so darn mad all the time. (Falco herself addresses this in a recent episode of "Salon Talks.") May that be so, and may it succeed. If it doesn't, it may be many years until we see another series like it.