After gutting loan forgiveness programs, DeVos is the most unpopular Trump administration official in a new poll 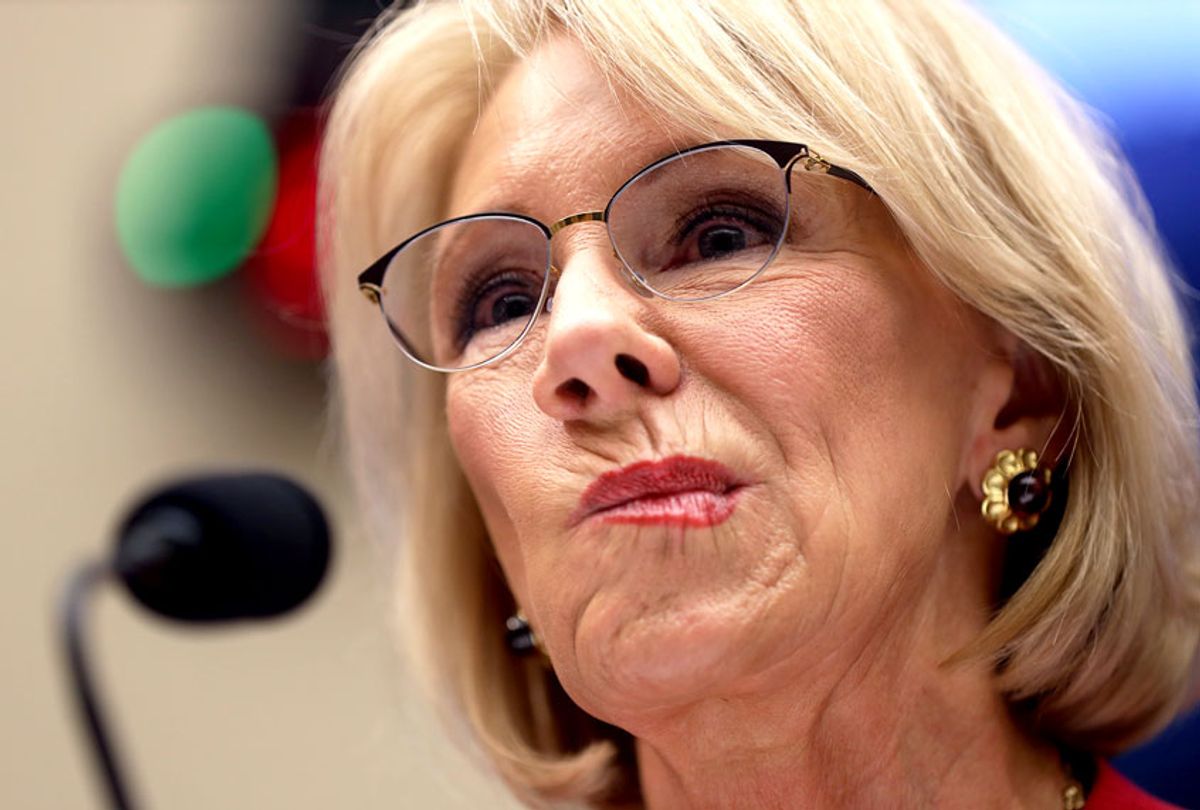 A majority of voters support congressional investigations into Secretary of Education Betsy DeVos' handling of student debt programs, according to the results of a new poll, which exposes how deeply unpopular the Trump Cabinet member is across the country.

DeVos has an approval rating of just 28%, according to a survey conducted by Global Strategy Group on behalf of government watchdog Allied Progress, who provided the results to Salon. DeVos received the lowest approval rating of any Trump administration official tested. The next most unpopular official was acting chief of staff Mick Mulvaney at 33%.

The survey, which sampled 1,008 registered voters, also found overwhelming support for congressional investigations into whether DeVos abused taxpayer funds or used her position to benefit herself or her family.

"If Secretary DeVos was hoping Americans are too distracted by President Trump's scandals to notice or care are about her efforts to sell out student borrowers, she's in for a shock," Derek Martin, the director of Allied Progress, said. "We found the public is especially skeptical of Secretary DeVos — for good reason. What motivated DeVos' decisions to disregard the law in order to deny debt relief to defrauded borrowers and disabled veterans? Americans want to know, and it's Congress' duty to find out."

The poll finds that 58% of voters support an investigation into DeVos withholding automatic student debt relief from severely disabled veterans despite calls to do so from nearly every attorney general in the country. Data released by the department showed that although it had identified more than 42,000 veterans who were eligible for debt forgiveness, fewer than 9,000 submitted the new applications it required. A bipartisan group of 51 attorneys general said the requirements "may prove insurmountable obstacles to relief for many eligible veterans due to the severe nature of their disabilities."

DeVos is also facing scrutiny failing to process more than 200,000 student loan forgiveness applications from potentially defrauded borrowers. The poll shows that 56% of voters, including 60% of independents, support an investigation after documents obtained by NPR showed that DeVos overruled career staff at the department and argued that students defrauded by for-profit colleges only deserved partial debt relief.

Her decision was blocked by a judge, who threatened to throw her in jail for contempt of court after the department nonetheless tried to collect debt payments from defrauded students. DeVos recently introduced a new plan that creates an income-based scale that determines how much debt relief defrauded students are eligible for — once again only primarily providing partial loan forgiveness.

Voters also back investigations into DeVos awarding a lucrative loan collection contract to Performant Financial, a company which she invested in before becoming secretary, in spite of a "marginal" bid, The Washington Post reported. Though the department ultimately canceled the contract after rival companies raised issues over the appearance of a conflict of interest, the poll finds that 56% of voters support an investigation into her handling of the contracts.

The administration has stonewalled Congress during the impeachment proceedings and other investigations, but the American public overwhelmingly wants the Trump administration to comply with lawmakers.

That is exactly what House Oversight Chairwoman Carolyn Maloney, D-N.Y., suggested when she threatened to subpoena DeVos after she "stonewalled" the committee in setting up a date for her to testify about her handling of the debt programs.

"Unfortunately, it now appears that rather than agreeing to testify before Congress — which is your obligation as a public servant of the American taxpayers — you made plans to appear at multiple political events for President Trump's re-election campaign," Maloney said in a letter to DeVos earlier this week. "Ignoring — or defying — requests for congressional oversight in order to spend your time campaigning for President Trump is an abuse of your position as secretary of education . . . If you will not agree to testify voluntarily, the committee will have no choice but to consider issuing a subpoena to compel your appearance."