Has Oprah lost her touch?

After the Russell Simmons and "American Dirt" debacles, how do we trust Winfrey now? 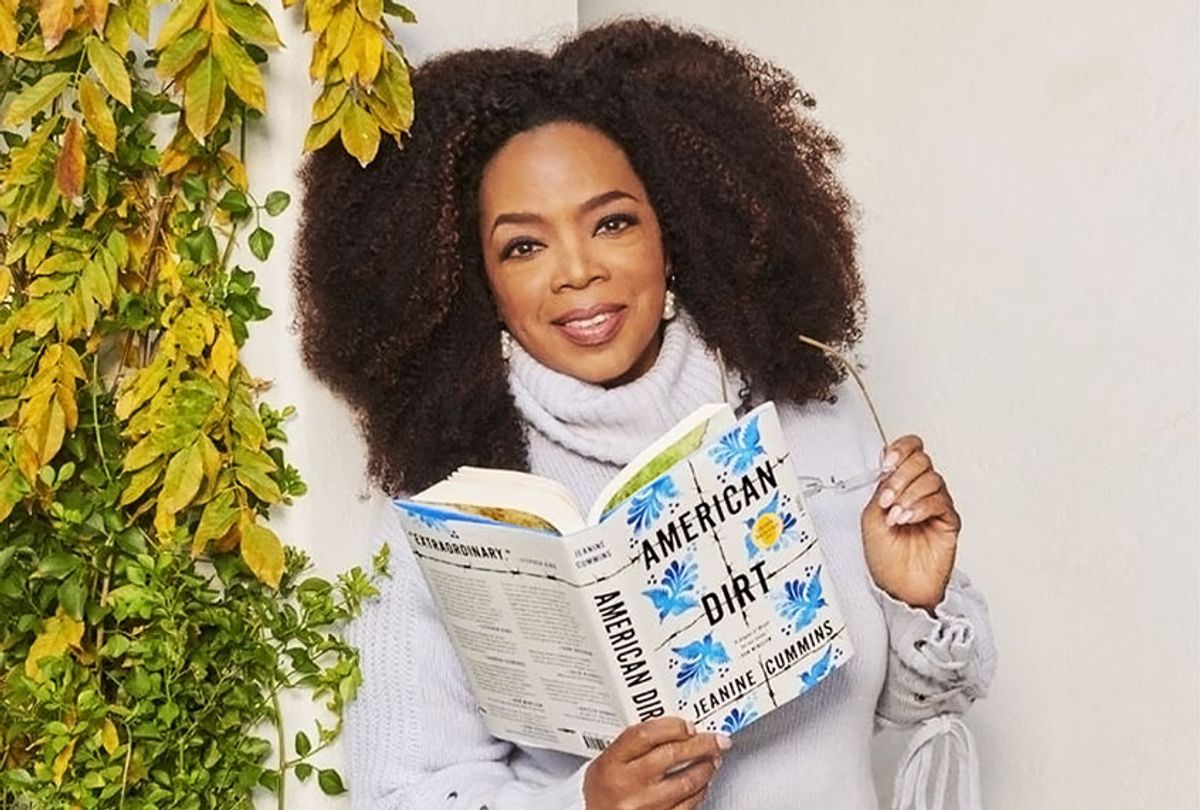 I have a theory that the longer that a person's time being famous exceeds the time they spent being unknown, the harder it becomes for them to entertain the possibility of being wrong about anything. The current occupant of the White House, for example, lived as a celebrity long enough to appear entirely unaware of the concept of being educated about anything. John Mulaney has an illuminating bit in "Kid Gorgeous" about pitching jokes to Mick Jagger. The "British billionaire in leather pants," as Mulaney describes him, was entirely at ease dismissing the comic's concepts with a terse, "NOT FUNNY." And then there's our cashmere-wrapped, collective godmother Oprah, who lately seems determined to give the barest minimum of lip service to any questions regarding her judgment.

The circumstances surrounding the recent controversy over the 66-year-old Winfrey's latest book club pick, Jeanine Cummins' wildly polarizing, instantly best-selling "American Dirt," are unique, of course. Fourteen years ago, the debacle over James Frey's "A Million Little Pieces" was an indisputable humiliation for Winfrey after the highly fictionalized nature of his supposed memoir was exposed on The Smoking Gun. Back then, she sat Frey on the naughty stool on her daytime show and fumed to his face, "I feel duped. But more importantly, I feel that you betrayed millions of readers," (It is notable, though, that Winfrey's impulse two weeks earlier had been to call in to Larry King and support the then still obfuscating Frey, saying she trusted the "essential truth" of the work and that the furor was simply "much ado about nothing.")

This time around, the work in question is a novel, one that already had all the buzz in the world even before Oprah hit it with her magic wand, thanks to its seven-figure advance and glowing advance reviews. A story of a Mexican family's odyssey as they flee to the United States couldn't feel more topical or resonant. "American Dirt" also seemed a natural choice for a book club that has, throughout its 24-year run, picked diverse, socially conscious works from the likes of Toni Morrison, Elie Wiesel, and Isabel Allende.

"Like so many of us, I've read newspaper articles and watched television news stories and seen movies about the plight of families looking for a better life," Winfrey explained in her January announcement of her choice. "But this story changed the way I see what it means to be a migrant in a whole new way."

Immediately, everything started hitting the fan. The book was panned in the New York Times. Cummins, who had previously identified as "mostly white," did not impress when she said that she had "worried that, as a nonmigrant and non-Mexican, I had no business writing a book set almost entirely in Mexico, set entirely among migrants. I wished someone slightly browner than me would write it." Nor did it curry favor when images from her book party, entwined in barbed wire, began circulating. As Salon's Ashlie D. Stevens has explained, "While 'American Dirt' may be fiction, it's all rooted in the experiences of those migrants, and to pretend otherwise is doing a dangerous disservice to our collective understanding of a very real, very pressing political issue."

But even as Cummins' publisher, Flatiron, was admitting, "We made serious mistakes in the way we rolled out this book," Winfrey was taking a more chill approach. Standing adjacent to a well-styled bowl of fruit, she appeared on her book club's Instagram to acknowledge "There's been a lot of talk about this book lately" and that "from the outpouring, may I say, of very passionate opinions" there is "a need for "deeper, more substantive discussion." She admitted, "When I first started to hear your comments opposing the selection, I was asking the question, in earnest, what is offensive?" And she promised, "What I want to do is bring people together from all sides to talk about this book and who gets to publish what stories." Yet her tone also implied her critics are being really, really emotional here. Why can't they just trust her?

Perhaps the dustup came as a complete surprise. There certainly wasn't this kind of furor in 2000 when Winfrey chose "House of Sand and Fog," Andre Dubus' tragic novel about an Iranian family, or when she picked Pearl S. Buck's classic of Chinese village life, "The Good Earth," in 2004. And Winfrey's acknowledgment that she is going to adjust the conversation not just to encompass the plot of "American Dirt" but its context in a publishing industry that is overwhelmingly white is promising. But it's also a softball, "Let's all play nice here" reaction to a frustration that appears to confound her, one that does not seem to consider that however much she personally loves a book, her unparalleled influence may have been misguided here.

It was the second such restrained response to controversy from Winfrey in a month. In January, she backed out as an executive producer on the new documentary "On the Record," about the allegations of sexual assault against Russell Simmons. The movie, from "The Hunting Ground" and "The Invisible War" filmmakers Kirby Dick and Amy Ziering, then lost its distributor. (It has since been picked up by HBO.)

Winfrey, who has been frank about her own history of sexual assault, explained in her announcement, "There is more work to be done on the film to illuminate the full scope of what the victims endured, and it has become clear that the filmmakers and I are not aligned in that creative vision." She added, "I will be working with Time's Up to support the victims and those impacted by abuse and sexual harassment."

Yet the timing of her withdrawal was curious. A few weeks earlier, her former "Super Soul Sunday" guest Simmons singled her out on Instagram to post an open letter to Winfrey, saying, "I have already admitted to being a playboy more (appropriately titled today 'womanizer') sleeping with and putting myself in more compromising situations than almost any man I know. . . . So many that some could reinterpret or reimagine a different recollection of the same experiences . . . I have never been violent or forced myself on anyone." Winfrey later told the New York Times that "He did reach out multiple times and attempted to pressure me."

Oprah Winfrey is one of the most powerful individuals in entertainment and, by extension, the world. She is no doubt aware that power could be interpreted destructively. Flatiron canceled the rest of the "American Dirt" book tour after "specific threats to booksellers and the author"; a full out reversal from Oprah might easily throw gasoline on that fire. Likewise, as someone who has in the past endorsed books by Bill Cosby, she probably knows the importance of choosing her words wisely unless and until a man has actually been convicted of a crime.

Yet Winfrey's recent halfhearted, "Let's hear all sides" stances seem to speak to an increasing reluctance to openly examine her previous judgment calls, to reconsider who she promotes to tell the stories of migrant experiences or "Super Soul Sundays." Her charged history of elevating dubious experts is understandable — anybody would make some pretty bad calls in a long and varied career, and she's made some doozies. But she more and more seems to want to deflect all criticism and examination away from the possibility that she's just wrong here, as if admitting she doesn't always know best would mean she's not the all-knowing entity she seems. And then who would Oprah Winfrey, who for decades has confidently told us what to read and what to believe, be?