Trump effectively confirms Vindman will be booted from his White House job: “I’m not happy with him”

Vindman will be transferred off the National Security Council as early as Friday, according to a new report 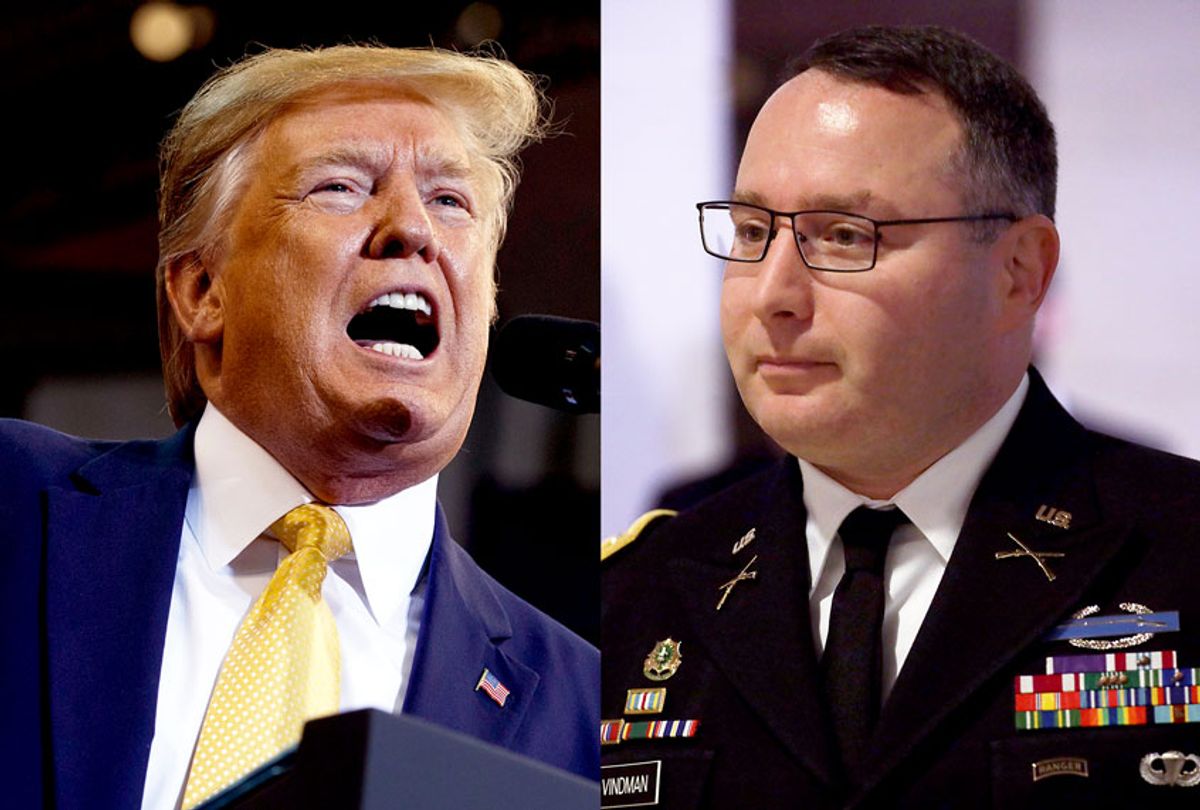 President Donald Trump effectively confirmed plans to boot Lt. Col. Alexander Vindman off the White House National Security Council after he testified in the impeachment hearings about his dealings with Ukraine.

"I'm not happy with him. You think I'm supposed to be happy with him? I'm not," Trump told reporters, adding that senior officials will "make that decision."

Vindman will be transferred off the National Security Council as early as Friday, The New York Times reported. Bloomberg News and The Washington Post previously reported that such a move could be in the works.

Vindman, who is on active duty in the military, is expected to be reassigned to a position within the Department of Defense, according to The Times.

The decision comes days after the Senate voted mostly across party lines to acquit Trump of two articles of impeachment stemming from his pressure campaign on Ukraine to investigate his political rivals.

Vindman, who was awarded a Purple Heart after being wounded while serving in Iraq, testified to Congress that he twice reported Trump's Ukraine dealings as a national security risk to his superiors. Vindman, who immigrated to the U.S. as a child, was the target of numerous Fox News and Republican smears, accusing him of "dual loyalty" and questioning his motives for testifying.

Vindman returned to work after his testimony, but he has been "largely cut off from political appointees" and has yet to meet new national security adviser Robert O'Brien, who has been in the position since September, according to The Times.

Months after his testimony, Republicans renewed their attacks on Vindman during the Senate trial.

Sen. Marsha Blackburn, R-Tenn., accused Vindman of being "vindictive" and claimed that he was a "liberal" who "wanted to take out Trump."

Vindman's attorney fired back at Blackburn, accusing her of "cowardice" and "slander."

While Blackburn "fires off defamatory tweets," his attorney said, "Lieutenant Colonel Vindman will continue to do what he has always done: serve our country dutifully and with honor."

With Trump's trial over, however, Vindman had told colleagues of his plans to depart the National Security Council in the near future, according to CNN. But Vindman's stint at the White House was not scheduled to end until July.

Jennifer Williams, an aide to Vice President Mike Pence who also testified at the trial, is also expected to leave her role two months ahead of schedule, a White House official told CNN.

Acting chief of staff Mick Mulvaney, who refused to testify but admitted to a "quid pro quo" in relation to Ukraine from the White House press podium, is also in jeopardy of being ousted, according to CNN.

Trump denied the report on Friday, but the network noted that the president "effectively lost confidence" in Mulvaney months ago and multiple advisers have pushed for him to be replaced with retiring Rep. Mark Meadows, R-N.C.