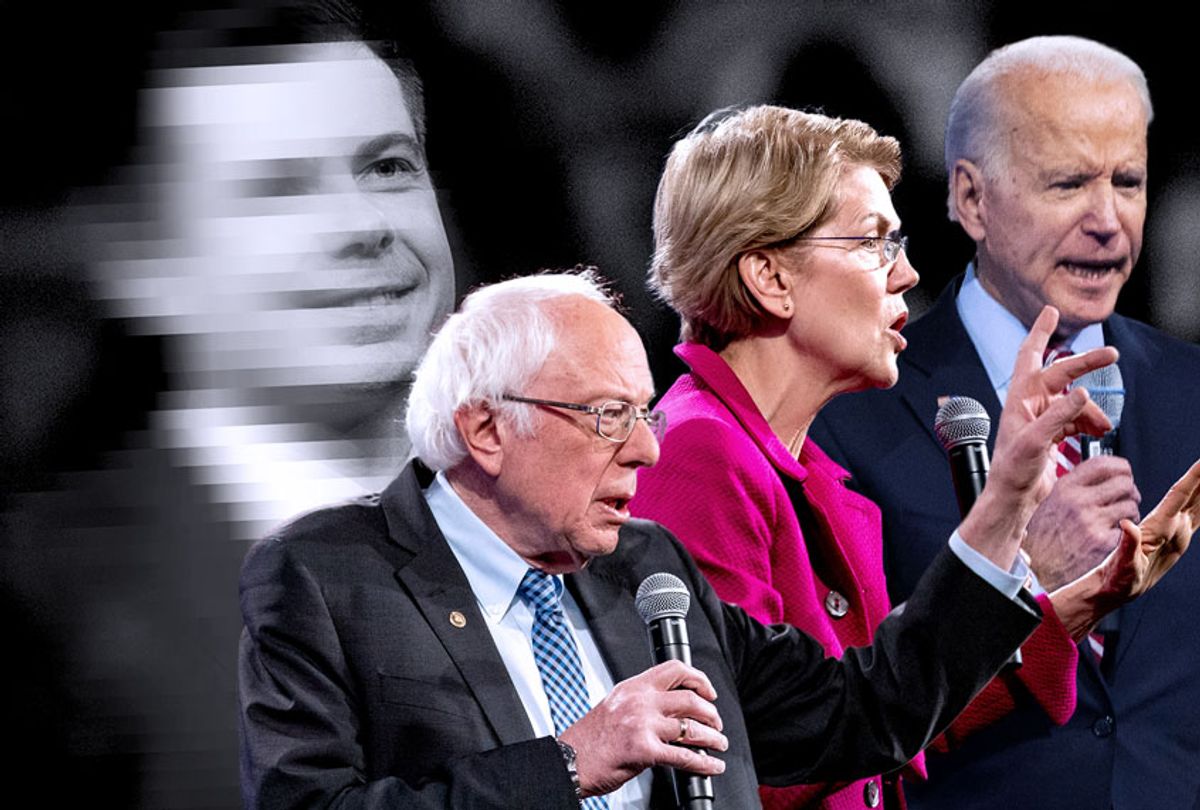 It's obviously asinine to proclaim that the Democratic presidential campaign has reached a turning point in the middle of February, after one disputed election that involved about 175,000 voters and will never be resolved to everyone's satisfaction. But on the eve of the New Hampshire primary, with its long history of launching some presidential contenders and sending others to their doom, that's exactly where we are.

If New Hampshire is just as unrepresentative of 21st-century America as Iowa — it actually has fewer people of color, which is quite an accomplishment — at least this will be a straightforward primary election, with the winner determined on the revolutionary principle of who gets the most votes.

Sure, that's a dig at Pete Buttigieg, the now-former mayor of South Bend, Indiana, who got to declare victory in Iowa despite finishing second in actual votes, based on abstruse mathematical formulas that A) no one really understands and B) do not appear to have been applied with any consistency. Couldn't, like, Andrew Yang have swooped in and sorted all this out in a few hours with his team of math geniuses? The answer to that, I presume, is no, given that the theme of the Democratic race so far seems to be: We took a system that didn't work very well and nobody really liked, and made it worse.

Someone will win New Hampshire, at any rate. It might be Buttigieg, who has been the subject of a media boomlet this week after his unexpected surge in the Iowa caucuses. On the other hand, it definitely might not be: He has also been subjected to considerable abuse from the left (at least some of it unfair and mean-spirited) and took an epic smackdown during Friday night's debate from Sen. Amy Klobuchar, who has had quite enough of a small-town mayor stealing her Midwestern shtick and "moderate lane" voters and wants all of it back on her desk by tomorrow morning with no excuses, Buster.

Whatever happens this week, after reading my colleague Amanda Marcotte's reporting from New Hampshire, I see Buttigieg as a political mirage: a human Throwback Thursday, an echo of an echo of a particular kind of middle-ground Democratic idealism that goes back through Barack Obama and Bill Clinton to John F. Kennedy. It has a narrow but profound appeal to a subset of Democratic voters who would like to smooth over the discord of the last 60 or 70 years in American life into a narrative of upward progress, temporarily interrupted by Donald Trump.

Buttigieg's vision, which seems to be permanently short on specifics and constantly subject to change, could fairly be described as making America great again — not, of course, in the Trumpian white-nationalist sense, but in an equally vague idiom of Scout meetings and mainline Protestant churches and "public service," where children of all races attend above-average schools, entrepreneurial dreams are nourished and rational discourse can restore a hopeful future.

His evocation of a kinder, gentler nation is central to the often-noted paradox of his candidacy: By far the youngest contender in the Democratic field, he appeals almost entirely to voters over 45. Buttigieg is literally an old person's idea of what young people in America ought to be like, right down to the no-longer-unconventional fact that his marriage, so blindingly wholesome and middle American that it would give Norman Rockwell a toothache, involves another man.

We should indeed pause to observe that no openly gay person has ever previously won a presidential primary or been a legitimate presidential candidate — and yes indeed, the fact that Buttigieg's sexual orientation appears to be a total non-factor supports the narrative underlying his campaign. Whether Buttigieg can translate his appeal beyond older white people in rural states remains to be seen; to this point, he looks like a candidate who has dressed up an imaginary vision of the past in robes of wokeness and is selling it as the future.

If Buttigieg has much to gain and much to lose in New Hampshire — it's difficult to imagine him winning another state, if he doesn't win this one — that goes double for Sen. Bernie Sanders. He has consistently led in the polls in recent weeks, and scored a historic victory over Hillary Clinton in the state four years ago, becoming the first Jewish candidate to win a major-party primary election. Sanders is in a far better position than any other Democrat in the race, which in itself is an amazing development, considering how much loathing he provokes among many moderates, and how many people believe he can't possibly win a general election against Trump. He has an immensely loyal fanbase and continues to break all the records in small-dollar fundraising — but if he doesn't score a convincing win in the Granite State, that will throw the Democratic race into even more turmoil than already exists, and will cast Sanders' tenuous frontrunner status into serious doubt.

None of that is a prediction, by the way. I don't know what will happen on Tuesday, and I 146 percent do not know who the Democratic nominee will be. As politics nerds will tell you, there's a supposedly inflexible rule that you can't win the Democratic nomination without finishing in the top two in either Iowa or New Hampshire. Or at any rate, that hasn't happened, going back to the dawn of the modern primary system in 1972.

That would seem to signal doom for both Joe Biden and Elizabeth Warren, who will both be delighted if they finish third, not to mention Klobuchar, the favorite of all ordained members of the pundit class, who may finally (and to my immense surprise) be Klobu-charging toward a respectable result. But before you start yelling at me about letting black voters speak and sexist "erasure" and all the Amy data points: I agree! None of the so-called rules matter anymore, and the only thing we will know for sure on Wednesday morning is who won New Hampshire.

It's of course tempting to speculate: Biden is clearly in deep trouble and the sand is kinda running out of the hourglass for Warren, with two supposedly favorable states off the board and a tough road ahead through Super Tuesday. What the hell states can Amy Klobuchar actually win, that aren't Minnesota and that exist outside Jonathan Chait and Jennifer Rubin's dreams? Somewhere, isn't Mike Bloomberg writing checks and cracking wise, waiting for Bernie and Mayor Pete and Uncle Joe and the rest of these no-hope toilers to bring it home to Papa?

But no. Margaret Sullivan of the Washington Post recently issued a salutary injunction to people like me (and her, and other people arrogant enough to believe that our musings on politics might be worth reading) to stay out of the prediction business. Years ago, Bill Moyers told me that the question of who will win and who should win were always the least useful questions in politics. Every time I think about that wisdom, I regret the moments when I've defied it.

Pundits are really bad at predictions, first of all: Definitely no better than "random dude on barstool," and frequently worse. If the gruesome car-wreck of the 2016 election didn't teach us that — and apparently it didn't — there's already a long legacy of genius takes on this year's campaign, in which we were told that Beto O'Rourke would galvanize the youth vote, Kamala Harris was an unstoppable frontrunner, Kirsten Gillibrand would lead a wave of righteously angry women, Steve Bullock was the perfect political combo and Bernie was leftover socialist mashed potatoes and would be out of the race by last summer.

All those things are true, perhaps, in other strands of the multiverse. In this one, we've got a wintry showdown between one guy who would be the oldest president ever (and is beloved by young people) and another who would be the youngest president ever (and is beloved by older people). If you've got a time machine, go back a year or so and put some money down on that prospect in Vegas. But be careful about your return date, because the only safe prediction about the 2020 Democratic campaign is that it will look completely different in a few weeks. And, oh yeah, it will still be an incredible mess.