Scientists pinpoint mysterious repeating radio signal from outside our galaxy

Only two fast radio bursts have been detected that actually repeat. What they are is still unknown 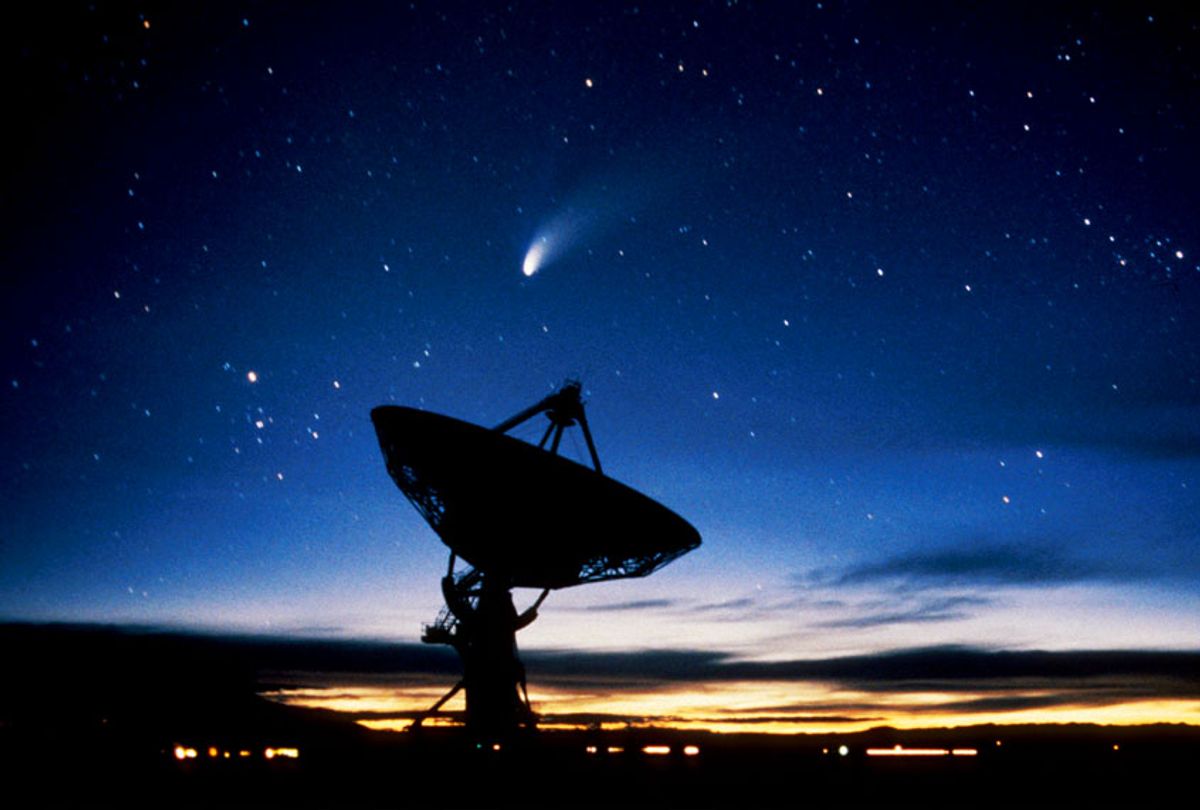 Nearly 500 million light years away, a mysterious radio signal is repeating itself.

It's a new piece in the puzzle of fast radio bursts (FRBs) — short bursts of radio waves that are so powerful that scientists are able to detect them on Earth, despite their extragalactic origins. Fast radio bursts are hard to study because of how brief they are, meaning telescopes can't often focus on them in time to get a good look.

Hence, the new discovery of a fast radio burst that repeats once every 16 days is a major clue, and marks the first time scientists have documented a predictable pattern among these mysterious repeating signals that are originating deep in space.

"We conclude that this is the first detected periodicity of any kind in an FRB source," the researchers said in the paper. "The discovery of a 16.35-day periodicity in a repeating FRB source is an important clue to the nature of this object." The repeating FRB has been dubbed FRB 180916.J0158+65.

The specific astrophysical event that causes FRBs is still unknown, although all observed FRBs are from galaxies outside our own. Such signals were first spotted in 2007. It was previously thought that such pulses were random, but according to the aforementioned paper published on the server arXiv in late January, researchers studying FRBs discovered that FRB 180916.J0158+65 is a "repeater," meaning it emits bursts repeatedly and follows a regular pattern.

Scientists have only discovered two repeating FRBs, including the one mentioned above. FRB 180916.J0158+65 was probed using the Canadian Hydrogen Intensity Mapping Experiment (CHIME radio telescope) in British Columbia. Using CHIME, researchers found that between September 2018 and October 2019, FRB 180916.J0158+65's bursts clustered into a period of four days, and then stopped for the next 12 days, before emitting a signal again on the 16th day. The authors of the paper posit one possible explanation could be orbital motion, meaning when an object is moving forward while being pulled by gravity toward another object at the same time.

"Given the source's location in the outskirts of a massive spiral galaxy, a supermassive black hole companion seems unlikely, although lower-mass black holes are viable," the researchers further explained. "Future observations, both intensity and polarimetric, and at all wavebands, could distinguish among models and are strongly encouraged, as are searches for periodicities in other repeaters, to see if the phenomenon is generic."

Up until this observation, FRBs seemed to be random. Overall, less than 70 FRBs have been documented.

There are competing theories as to what FRBs could be. One explanation posits that that FRBs are the result of a binary system containing a massive star and a neutron star, according to a separate paper published on arXiv that looked at the same data from FRB 180916.J0158+65. In this theory, the neutron star could be emitting radio bursts which are sometimes blocked by an opaque wind.

These latest findings are indicative of how humans may be closer to understanding these cosmic puzzles.

Though our civilization communicates frequently with radio waves, these mysterious signals are probably not coming from an alien civilization, as Salon has previously reported.

"It is unlikely that all FRBs are from alien civilizations due to the power requirements at cosmological distances, but possible," Avi Loeb, chair of Harvard's astronomy department, previously told Salon. "We worked out the numbers in a paper with my postdoc, Manasvi Lingam, two years ago."

"One needs to use all the power intercepted by the Earth from the Sun" to create an FRB of comparable intensity to the ones we've detected on Earth, Loeb said. However, Loeb did posit that "a small fraction of nearby FRBs could be artificial radio beams sweeping across the sky."