Rand Paul rips YouTube after it yanks video of him naming alleged whistleblower: “This is dangerous”

Paul was warned that the whistleblower's life is at risk. Now he claims YouTube’s action is the "dangerous" one 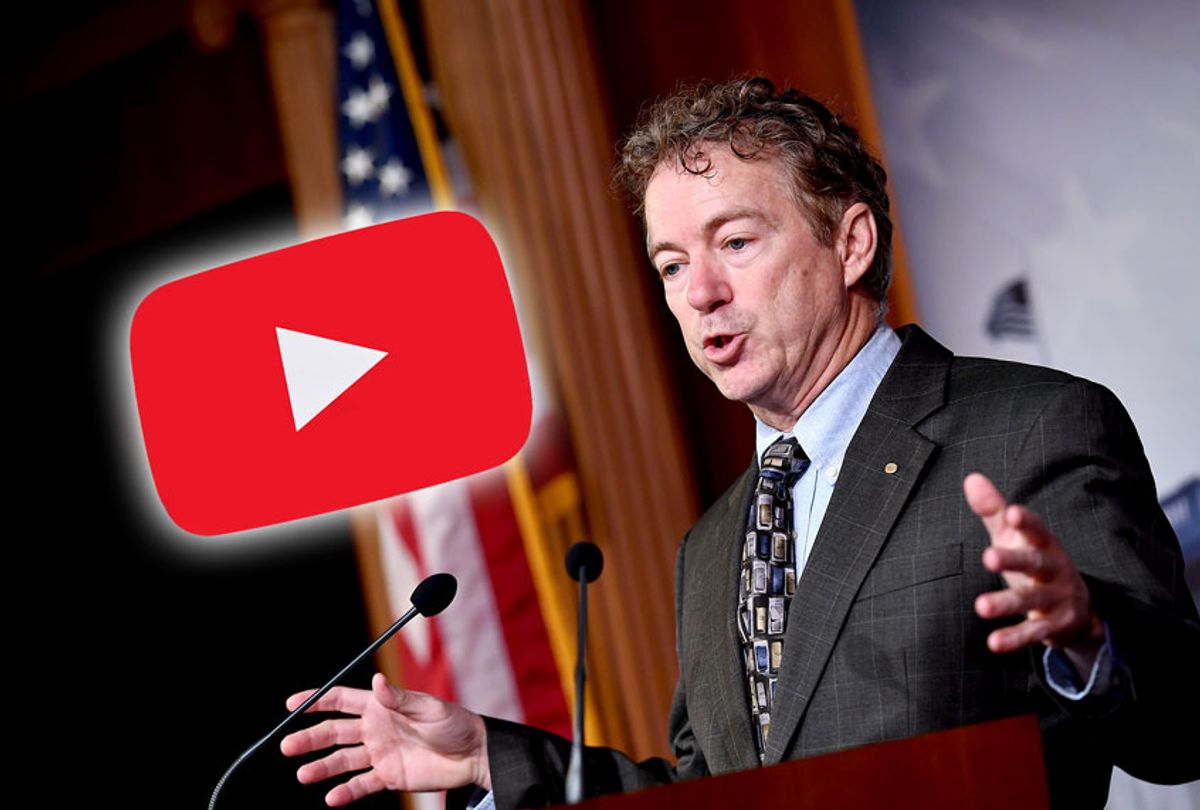 Sen. Rand Paul, R-Ky., claims that YouTube's decision to remove a video which shows him naming the alleged Ukraine whistleblower on the Senate floor is "dangerous" and "politically biased."

"Videos, comments and other forms of content that mention the leaked whistleblower's name violate YouTube's Community Guidelines and will be removed from YouTube," company spokeswoman Ivy Choi told the outlet. "We've removed hundreds of videos and over ten thousand comments that contained the name. Video uploaders have the option to edit their videos to exclude the name and reupload."

"It is a chilling and disturbing day in America when giant web companies such as YouTube decide to censure speech," he told Politico. "Now, even protected speech, such as that of a senator on the Senate floor, can be blocked from getting to the American people. This is dangerous and politically biased. Nowhere in my speech did I accuse anyone of being a whistleblower, nor do I know the whistleblower's identity."

Paul on the Senate floor read the name of a CIA analyst purported to be the whistleblower whose complaint led to President Donald Trump's impeachment, which has circulated in conservative circles, as lawmakers debated whether to remove Trump from office.

The senator also complained after Supreme Court Justice John Roberts refused to read his question, which also named the alleged whistleblower, during the impeachment trial's written question phase. "The presiding officer declines to read the question as submitted," Roberts said at the time.

Paul later claimed it was Roberts who he actually outed the alleged whistleblower.

"I would say the chief justice did that. By not allowing the question, he's sort of confirming to the public who it is. I have no idea who it is," Paul told CNN's Manu Raju. "I think it's very important that we know if there was a concerted government plot to bring the president down by a lot of employees."

The whistleblower's attorneys repeatedly warned against outing the identity of their client over safety concerns.

"If Congress and others do not protect my client's anonymity — which my client is afforded to by law — not only does it jeopardize their safety, but it jeopardizes an entire system that took decades to build. It will destroy effective congressional oversight for years to come," attorney Andrew Bakaj said during the impeachment proceedings.

Paul, who shared an article naming the alleged whistleblower on Twitter and called for the media to out the person at a Trump rally, also pushed for the whistleblower to be subpoenaed during the impeachment proceedings and said the name multiple times in interviews with reporters.

Republicans repeatedly tried to get the whistleblower's name on the record during impeachment proceedings. Rep. Louie Gohmert, R-Texas, said the name of the alleged individual during a House Judiciary hearing and also blurted it out during a completely unrelated House hearing on Puerto Rico.

Republicans have claimed that the whistleblower was biased in alleging wrongdoing by Trump, who pressed Ukrainian President Volodymyr Zelensky to investigate his political rivals while withholding nearly $400 million in aid. But the complaint was found credible and referred to the Justice Department by three top administration officials and later corroborated by a string of witnesses from the administration, some of whom have since been purged.

Rep. Devin Nunes, R-Calif., the top Republican on the House Intelligence Committee, threatened to investigate Trump-appointed Intelligence Community Inspector General Michael Atkinson after he found the whistleblower's complaint credible and forwarded it to the Justice Department, which declined to follow up.

"The Senate Intel committee under Richard Burr has told us that we will call the whistleblower," Graham told Fox News last week. "Why is it important? I want to know how all this crap started."

Trump's "quest for revenge," aided by Graham and Paul, "could mean the end of whistleblowing," former White House ethics chief Walter Shaub warned in a Washington Post op-ed. "Paul's reckless utterance of this individual's name and the rumors spread by others will be a strong deterrent for those who want to report wrongdoing."

About 70 inspectors general similarly warned the Justice Department that its handling of the whistleblower complaint "could seriously undermine the critical role whistleblowers play in coming forward to report waste, fraud, abuse, and misconduct across the federal government."