"Don't hang out with mean people": One comic's mission to fight sexist, racist, and ableist trolls 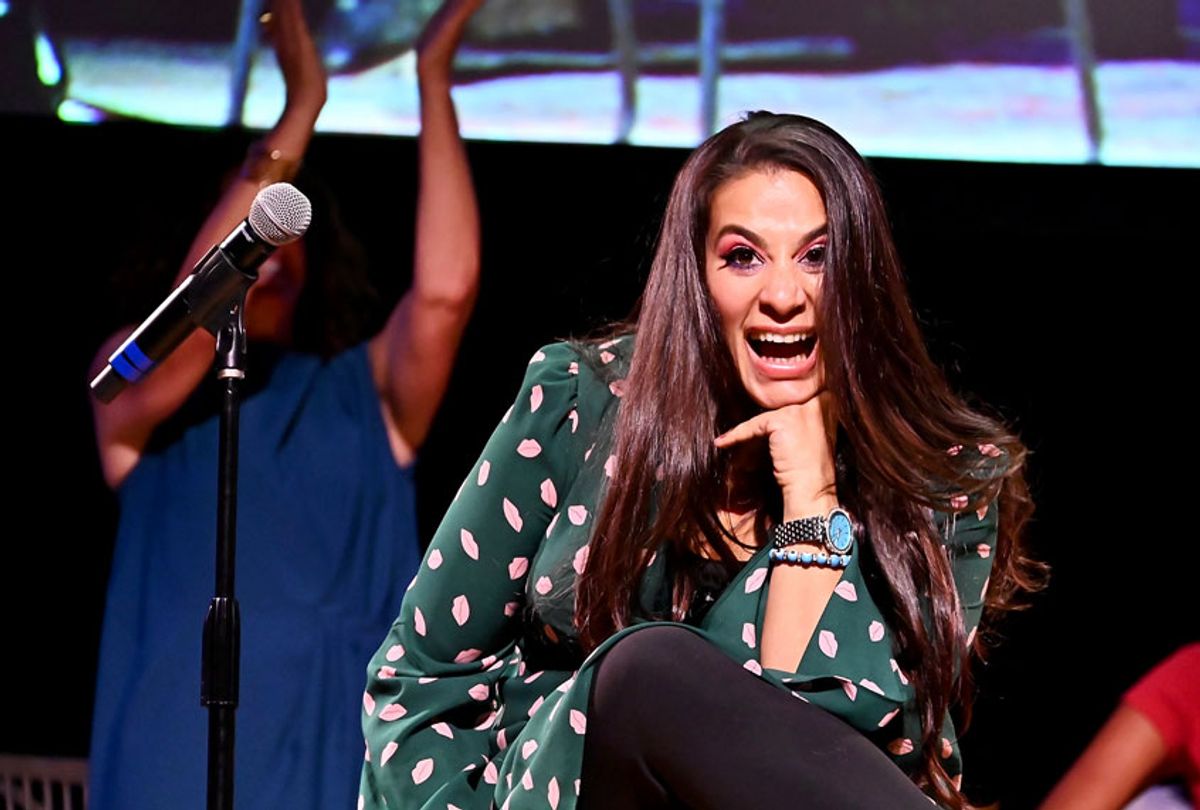 Maysoon Zayid on stage during Together Live at Town Hall on November 04, 2019 in New York City. (Astrid Stawiarz/Getty Images for Together Live)
--

One of the first things Maysoon Zayid will tell you when you talk to her is to feel free to stop her. It's not because she doesn't have plenty to say or because she invites interruption. It's because the actress, activist, and standup comic has cerebral  palsy, and knows that sometimes people mishear her words.

Yet during her recent conversation with Salon, Zayid could not have been more crystal clear in her message, and her meaning. As a self-described multiple minority, Zayid is on a mission to fight the sexist, racist, and ableist trolls out there, while also being really funny and refusing to be "inspirational." She has a new Audible Original called "Find Another Dream," and she talked to us about battling bullies, and her six-word advice for how to fix America.

For those who have not looked at your book yet, can you say what the title means and why you chose it?

If your dream turns into a nightmare, find another one. Instead of feeling like "I failed at what I dreamed, therefore I'm a failure, therefore there is nothing else to look forward to or live for," find another dream. Eventually one of those dreams will come true. Or you'll die and you won't know that you failed.

You had someone say that to you early in your career, in a different context.

My parents couldn't afford physical therapy, so they sent me to tap class. I was at a dancer's convention at the Waldorf Astoria, and they had all these Broadway divas giving us advice. The one who was mentoring us went around the room and asked us what our dreams were. People were saying things like, they wanted to be a unicorn or they wanted to fly. He got to me and I said, "I want to dance. I want to tap dance on Broadway and bring in the noise, bring in the funk." And he said, "Girl, you're a cripple. Find another dream."

So I did, which was to be on the daytime soap opera "General Hospital." That was literally my backup. I didn't give up on the Broadway goal but I was like, "Okay, I need a safety. It'll be being on 'General Hospital.'" I aimed just as high, instead of allowing it to break me.

I think that's the power of my comedy and what made my TED talk successful. People hear what they want to. If you're a woman, it's a roar. If you're a disabled person, you're being seen. If you're Muslim, you're feeling equal. If you're from Jersey you're like, "She's Jersey, and I'm proud."

I'm curious what you're thinking now, having conversations all across the country about the frustrations a lot of us feel dealing with conditions that are long-term. What are the issues that you feel are defining this year?

My top issue is civil rights. I'm a multiple minority, I'm a Muslim woman of color and I live in a country where the most powerful man in the world leads chants of "Send her back" about women who are exactly like me. It's terrorizing and it's terrifying. Civil rights is my number one issue, which is tied very much in curbing the rise of white supremacy, racism, bigotry, hate crimes, antisemitism, and violence against people with disabilities, which is a real thing in this country.

Which brings me to my second most dominant issue, violence against women. Again, the world's most powerful man has multiple accusations of sexual violence against him. The violence against women epidemic in this country; I want someone who is going to look at that. My third most important issue is education. My parents had to fight the public school system to mainstream me because I was disabled. Betsy DeVos is rolling back protections for students with disabilities. Access to a free and affordable education for all students regardless of ability is a huge, huge priority for me. And who checks all the boxes? Elizabeth Warren. But even my least dream candidate is still a better choice than the current occupant.

Here's what I'd say, for people who feel that it's unfair to be forced to choose "the lesser of two evils" when their dream candidate is not the nominee. You're not choosing the lesser of two evils; you're choosing to protect minorities. You're choosing to save lives of people who need access to health care, and that's a good choice. That's not two evils. That's a good choice. I just hope that we do learn from 2016 and we all get behind the candidate, and I hope that's a candidate we can all be proud of.

You talk very openly about feeling like you grew up pretty much in an environment where you did not feel bullied, you did not feel marginalized, you were treated pretty well by your friends and neighbors in your community. Do you feel it's getting better or worse?

I have the same best friend since I was 5 years old. I asked them why they didn't treat me differently and they said, "First of all, you were always there." They were too young to comprehend the difference, and by the time they did, they didn't care because I was part of the group. But my friend also said, "Our parents would have never allowed it. They would have shut it down immediately." I don't know what's happening, but people with disabilities and kids with disabilities are being bullied, and violence against people with disabilities is out of control.

Then as a Muslim, you've got to be kidding me. My life shifted post-9/11. It's why Dean Obeidallah and I created the New York Arab American Comedy Festival, to combat the negative images of Arabs and Muslims in media. My life is just having to have bodyguards at certain shows because the hatred towards Muslims is being fueled by a person who controls this country. There are people saying, "We'd kill that disabled funny chick because Muslims hate us because they danced in the street in Jersey." Who is telling them this? The president of the United States. It's not getting better. It is terrifying. What we're up against is at the highest levels of power in this country.

When you're out there and you're meeting all of these different groups of people, what is your one message?

Don't hang out with mean people.

That's how I fix America. Don't hang out with mean people. We think that we have to hang out with people who are mean to us, who are abusive to us, especially if they're our family. And we don't. If you shut out mean people and you shut them down and you take away their power, you rise and they fall.

I get bullied a lot on the internet, I get made fun of a lot on the internet. There was a moment in my career when I was on "Countdown with Keith Olbermann," where I thought twice about going back on screen because I was sick of people making fun of my crooked mouth. Instead I was like, "No." I dreamed of this, and I worked hard for this for 20 years, I'm not going to let mean people stop me. When you remove them and you remove their opinion and you stop letting them affect you, they lose all power and you gain strength. I know it's hard to do. It's hard when people say your knees are chunky. It's hard. I know.

I feel exactly the same way and I have done it in my life. I cannot silently condone by looking away or pretending that this doesn't exist. I can't do it and I don't want to legitimize these kinds of attitudes and these kinds of behaviors, and I can't compartmentalize it.

You and I have the ability to speak up and we must. For those who don't, walk away. Not everybody's willing to confront; get up and leave.

And we all have varying levels of power. What do you do when your kid's school teacher, or your boss, or your father says something, and you're still living at home or they're paying your tuition? We all also have to make these ethical bargains.

That's the second part of the message. It might not be right now, but the second you can, do it. Create the Ohana, the family around you, that makes that transition possible. If you're 12 years old and you're in a household where the parent is controlling your every move, verbally tearing you down nonstop and there's no way that you can get out of that, we have to create a path where we say, "The people who love you are telling you the truth."

We're living in such an incredibly unprecedented, unnatural time, at least in American history. I see people in the media still trying to play by the old rules and still trying to say, "Well, we have to cover both sides."

I'm from the Arab world; this ain't new to me. And this is what black voters are saying also. This is not new to them.

What gives you hope? What makes you get out of bed in the morning and like maybe we can make it better?

My cat, Beyonce. I'm extremely blessed, and I had incredible parents. Part of what motivates me is the legacy of my father, who was of course a girl dad. I hear people all over the world say, "I heard that story that you told about your father, and now I'm doing that with my daughter." Or, "I heard that your father passed, and now I say a prayer for him." Those things they really motivate me to continue his legacy and continue to uplift him, because he brought me so much joy and so much power that I feel the need to walk forward and shine that light.

Then my mom is the greatest, and failure is not an option. I'm not allowed to not get out of bed. If I'm not touring, she makes me walk three miles a day. She literally walks into my house and drags me out. She's a great motivator. Then I have big dreams. I want fame, I want a seat at "The View" or to be on "Good Morning America." I achieved my "General Hospital' dream and now I'm chasing the next one, and it's a great motivator. And finally, I believe in "Star Wars." I believe that light defeats darkness, and I want to defeat Donald Trump.

This conversation has been condensed and edited for clarity.