"Fresh Off the Boat" didn't transform the sitcom as we know it, but that's why it mattered

After six seasons the Huangs are signing off of ABC. But their place in elevating Asian Americans on TV is secure 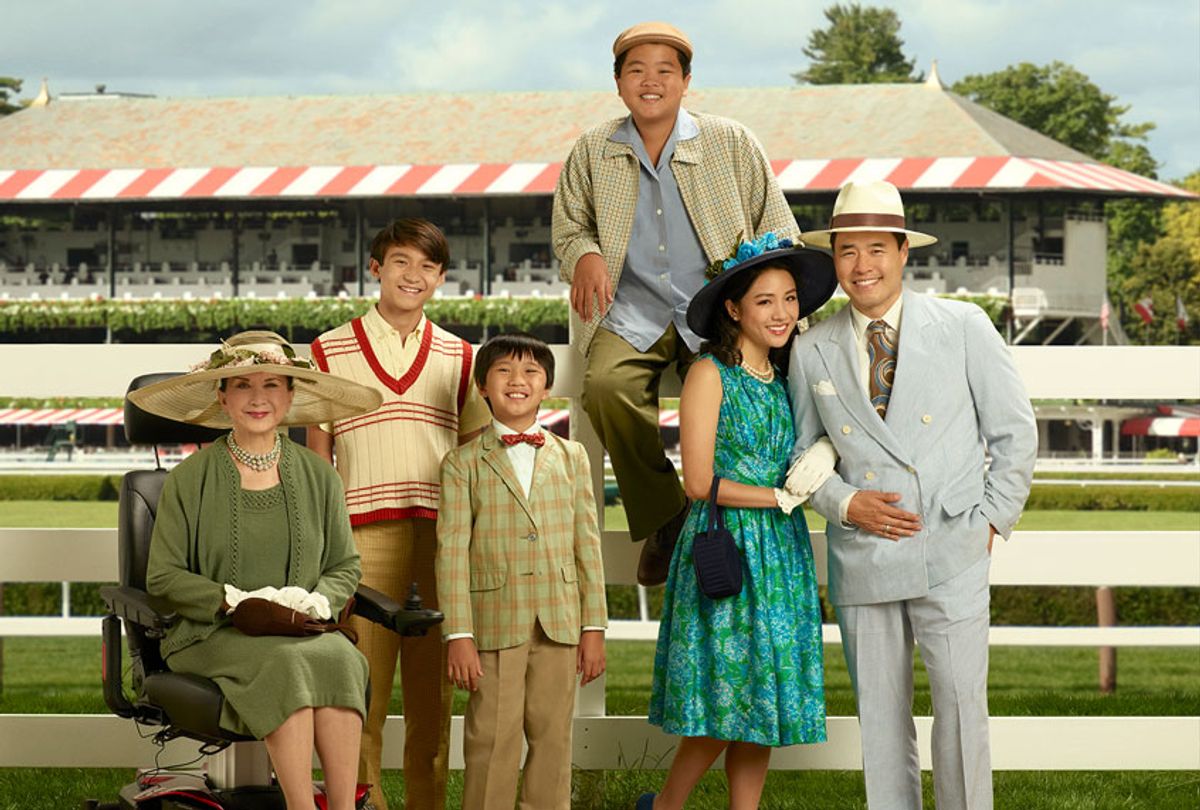 Judging by the ratings for its current season "Fresh Off the Boat," which airs its series finale on Friday night, the ABC comedy will end quietly relative to its debut in 2015's midseason line-up.

For the record – and this cannot be overstated – "Fresh Off the Boat" is ending for reasons that defy the conventional, exclusionary Hollywood assumption that viewers didn't want to watch a series featuring an ensemble cast of color and centering the stories about a Taiwanese-American family. If that had been the case, it wouldn't have crossed the 100-episode mark in 2019, traditionally seen as the threshold for lucrative syndication deals.

Rather, "Fresh Off the Boat" – starring Constance Wu, Randall Park, and Hudson Yang –modestly held its own on ABC's Tuesday nights amidst a comedy lineup that kept shifting around it (mostly consisting of series that no longer exist) because of the cast's appeal, primarily Wu's breakout portrayal of family matriarch Jessica Huang.  Until the arrival of "Roseanne" and the monstrous ratings resulting from that, the series fit in smoothly with "The Middle" and "Black-ish"; the former ended in 2018, and the latter is still airing and produced two spinoffs.

Besides, by the time ABC booted "Fresh Off the Boat" to Fridays in the 2018-2019 season, Wu already set her sights on a film career, and its ascendance began following the enormous success of the 2018 theatrical blockbuster "Crazy Rich Asians"; in its wake she was not shy about her desire to leave the show. With other cast members' contracts expiring and creator Nahnatchka Khan hopping over to Universal TV and Netflix, the writing was on the wall.

(Khan's next project with her "FOTB" co-producer Jeff Chiang is NBC's "Young Rock," a comedy based on Dwayne "The Rock" Johnson's formative years spent growing up in Hawaii.)

Ending in a place of dignity is always better for any show's legacy, and "Fresh Off the Boat" meets that bar by ending now. Actually, its ending is right on time – in sync, even, with the departure of "Modern Family." That ABC major sitcom hit influenced the network's comedy lineup for most of its existence  – much to the chagrin, it must be said, of the loyal audiences for critically under-appreciated red state-appealing comedies such as "The Middle" and "Last Man Standing."

In fact, the tone of "Fresh Off the Boat has more in common with those shows than "Modern Family," making it less a TV comedy innovator than a keen adapter of ABC's family-friendly model, one that joyfully conveys one kid's experience of growing up Asian American in Orlando during the 1990s.

Yang's Eddie starts out the series as a hip-hop obsessed kid doing everything he can to be seen as cool and navigating between his demanding mother and Park's kindly dad Louis. Middle brother Emery (Forrest Wheeler) distinguishes himself as the cute kid who somehow becomes the neighborhood crush, and youngest Evan (Ian Chen) is a studious genius.  The real Eddie Huang – on whose memoir the series is based – himself voiced his disapproval the series' middle-of-the-road interpretation of his story and fictionalized persona after it premiered, which didn't significantly impact the show's fortunes.

His criticisms have merit; all of these characters, even Wu's sharp and hard-to-please Jessica, represent fairly formulaic archetypes in the world of broadcast sitcoms.  But in a way, that was the point: "Fresh Off the Boat" doesn't exist as a network's performative token of inclusion. It's a series starring Asian Americans telling its version of universally relatable stories about the human experience without negating the family's shared cultural identity or sidelining each character's individual personality.

Its writers also used the show's primetime platform to tell vital stories about racism and immigration through the Huangs' experience without abandoning its comedic spirit. People should also appreciate the show's status as the only broadcast primetime series that features a co-star regularly speaking Mandarin, in the form of Lucille Soong's straight-faced Grandma Huang.

All of these are major accomplishments when one remembers there was a gap of more than two decades between sitcoms starring Asian American ensembles. That's not the case today.

"Fresh Off the Boat" leaves us in the midst of the first season run of Comedy Central's "Awkwafina Is Nora From Queens," a show centered upon its eponymous star (and Wu's "Crazy Rich Asians" co-star) that prominently centers Nora's family, including her father (played by B.D. Wong) and grandmother (Lori Tan Chinn). Comedy Central has already picked it up for a second season.

Awkwafina, by the way, became the first woman of Asian descent to host "Saturday Night Live" for 18 years when she did the honors in 2018. Prior to that came Lucy Liu in 2000. And after her gig, "Saturday Night Live" saw fit for the first time in nearly half a century to elevate an East Asian performer, Bowen Yang, to the status of ensemble cast.

The six-season run of "Fresh Off the Boat" coincided with other significant strides for performers of Asian heritage in the TV space, such as Mindy Kaling's shift from the being the romantic lead of "The Mindy Project" to producing, and Sandra Oh's history-making Emmy nomination for her work in BBC America's "Killing Eve," returning for a third season on April 26. And over on Disney Channel, the series "Andi Mack" featured a Chinese  American family, and the YA space got its first installments of Netflix's rom-com "To All the Boys I've Loved Before," focused on a Korean American protagonist.

Aziz Ansari's "Master of None" won wide acclaim prior to a #MeToo controversy that snagged its creator and lead. The show's co-creator Alan Yang then went on to co-create an Amazon series and has "Tigertail," a film he wrote and directed based on his family coming out this year. Ken Jeong, who for a short time helmed his own (very bland) family sitcom after "Fresh Off the Boat" premiered, is the star of the judges panel of Fox's highly successful reality competition "The Masked Singer" and will soon host another reality show based on a South Korean format, "I Can See Your Voice."

Kumail Nanjiani's Apple + anthology series "Little America" is a thing of beauty. Lilly Singh, a Canadian of Asian heritage, hosts a late-night series on a major network. Over on Netflix, Hasan Minhaj hosts his own weekly comedy series. We are seeing all of this unfold right now.

On the drama side, 2019 yielded  "The Terror: Infamy" on AMC, steered by an Asian American showrunner, with a primarily Asian cast featuring George Takei, and Cinemax's "Warrior" set in 19th-century San Francisco's Chinatown.

Just as importantly, "Fresh Off the Boat" bows out in a year that saw a Korean film, "Parasite," explode into a worldwide phenomenon and win four Oscars, including Best Picture.

So there appears to be improvement in the area of Asian representation on TV . . . somewhat. Shortly after the Oscars, it was announced that HBO was developing a limited series based on "Parasite," with a few outlets teasing that the premium cabler may even had an actor in mind. That actor? Mark Ruffalo.

In 2019, ABC developed a pilot from Emmy-winning "Rick & Morty" writer Jessica Gao that featured an ensemble led by Asian performers. But that was a year ago, around the same time ABC passed on Lisa Takeuchi Cullen's drama "'Ohana."

Other series either co-created by or starring Asian performers have come and gone over the last five years, including AMC's "Into the Badlands" and NBC's "I Feel Bad." Still others, like FX's "Shogun" and The CW's resurrection of "Kung Fu," may provoke discussions about the value of resurrecting orientalist stories from the 1970s and 1980s in the modern era.

You'll notice that there are few enough series starring Asian actors and featuring primarily Asian ensembles that I can list them in this space, and few enough so if I neglect to mention a few of them (I see what you're doing on "Avenue 5," Suzy Nakamura) I will make people mad.

That's reasonable. As always, all of this public-facing excitement tends to be deflated when someone crunches the hard numbers concerning casting and production.

According to UCLA's 2019 Hollywood Diversity Report, the most recent report that includes TV data (the 2020 version separates TV from film, with the TV study due to be released in April), performers of Asian descent played 4.6% of roles on broadcast scripted series that aired in the 2016-2017 season. White actors played 63.3% of the roles in that same season, with Black actors claiming 20.6% of parts seen on TV.

On cable the numbers are even more disparaging with 3% of scripted series featuring Asian actors. Digital platforms actually have the highest percentage of characters represented by Asians – 4.9% of roles, which actually comes closest to meeting 2017 census statistics, when Asian Americans comprised 5.6% of the U.S. population.

That number is small in relationship with the whole of the nation's population, but that should only serve to bolster assertions that audiences of all backgrounds are interested in stories offered on shows like "Fresh Off the Boat," portrayed by people with ways of relating to the world that differ from the white experience that is seen, by default, as the standard.

"Fresh Off the Boat" didn't transform the sitcom as we know it, but that was never the main challenge.  What it dared to do has more lasting value in the long run, which is it inserts a Taiwanese American family into the heart of a run-of-the-mill family sitcom airing on a major broadcast network. It succeeded in that task well enough to earn a healthy syndication afterlife. Its exit may be muted, but the road it helped pave is increasingly traveled. That should be heartening.