"Emma." is the candy-coated "Clueless" remake we deserve 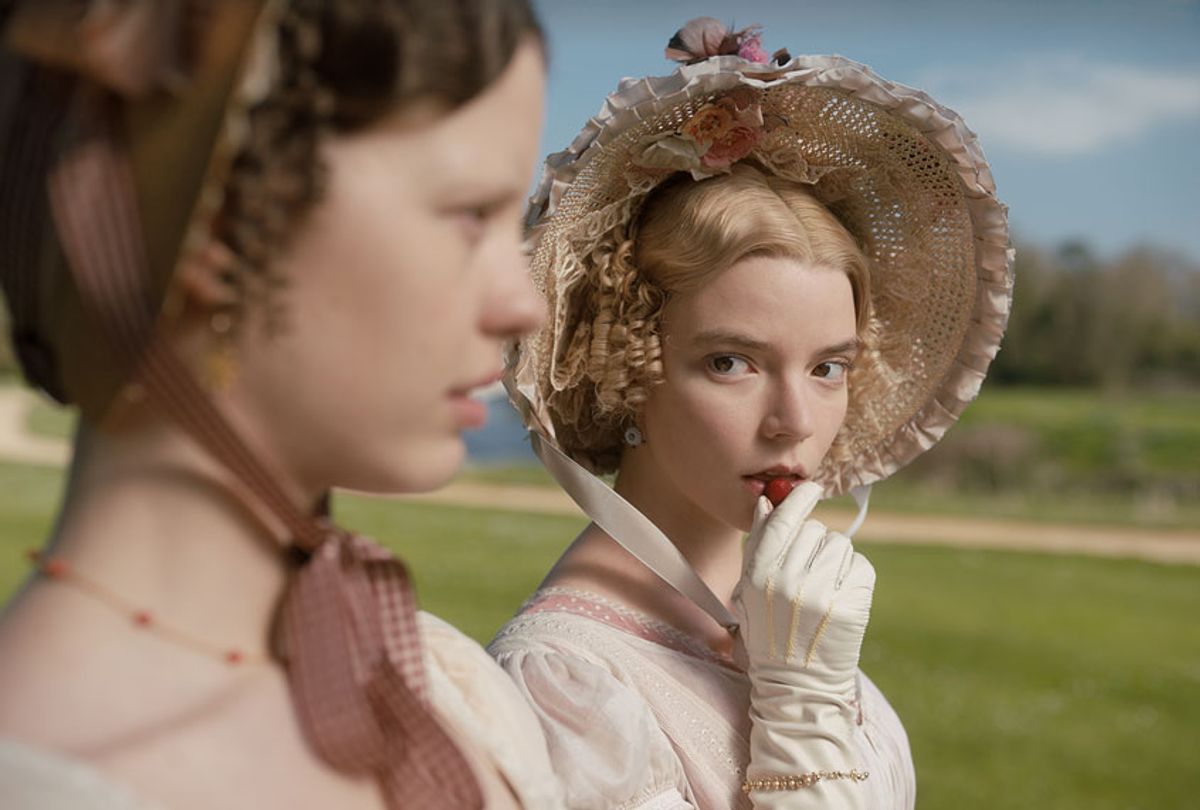 It is a truth universally acknowledged that the most beloved incarnation of Jane Austen heroine Emma is Cher Horowitz. And if director Autumn de Wilde's oversaturated, impossibly sunny new adaptation of the classic bears more than a passing resemblance to its Beverly Hills-based Austen ancestor "Clueless," the homage is an effective one. This new "Emma." – yes, with a period affixed to the name – is one that knows in its bones that Austen wrote the first great teen comedy, and runs with that joyfully.

Despite being described in the very first sentence of the novel that bears her name as "handsome, clever, and rich, with a comfortable home and happy disposition," Emma Woodhouse has never been a figure of aspiration to bookish Anglophile girls the way Sara Crewe and Hermione Granger are. Emma is an interfering know-it-all, a snob who nurses petty grudges. This, of course, is also what makes her so complicated — and so funny and timeless.

The story, for those whose English literature/'90s-era movies knowledge is a little rusty, centers on the misguided machinations of the pretty, privileged daughter of a doting widower (the eternally suave Bill Nighy, having the time of his life). Emma is a bored daddy's girl and small town queen bee who, having been granted everything she desires her whole life, magnanimously, ignorantly takes up recreational meddling. Imagine, if you will, a Regency Gwyneth Paltrow, the quintessential rich girl who wants to fix your life with her benevolent insanity. (It's one of the most perfectly foreshadowing bits of casting ever that Paltrow played Emma in the 1996 film version of the novel.)

In the wake of her former governess' recent marriage — a matchmaking victory she claims for her own — Emma (Anya Taylor-Joy) next trains her eye on the sweetly unpolished Harriet Smith (Mia Goth), a newcomer to town of uncertain background. But in attempting an ambitious alliance for Harriet, Emma misinterprets every cue and soon reveals herself both an unreliable judge of character and a messy bitch who lives for drama. Acting as her moral conscience is her brother-in-law George Knightley (Johnny Flynn, whose musical talent gets put to satisfying use here), the teasing foil to her schemes who sees her potential nonetheless. This being Austen, it somehow all works out in the end.

De Wilde's version places the Austen tale squarely where the work belongs — in a world that is simultaneously over the top and stingingly real. The film is drenched in candy shop colors, announcing the passage of each season but infusing them all with equal Barbie Dream House brilliance. Yet it also reveals the inherent emotional depths of its central characters with confident sophistication. Jane Austen was no floofy, beach read romance writer. She understood grief, heartache, and economic distress; her genius was finding the comedy within that pain. Emma is a girl whose mother died when she was a child, who has been thrust into the role of lady of the house far too young. Gee, you wonder why she's such a control freak? Her father's endless fussiness is played at first as an easy joke. Later, when it's reflected in his elder daughter's similar anxiety, the shadow of devastating, capricious loss reveals itself. Austen makes buffoons of her characters, but she never dabbles in cruelty.

It's devilishly fitting that this newest Emma is Anya Taylor-Joy, whose gift for playing angels with sharp claws was evident in twisted little hits like "The Witch" and "Thoroughbreds." Her Emma has just the right amount of Veruca Salt coursing through her veins — she's a doe-eyed little rich girl who will burn this place to the ground if she doesn't get her way. Her costar Flynn adds a satisfying slow burn chemistry to the mix — when Knightley puts his hand on Emma's waist in a pivotal dance scene, it's the most erotically charged piece of cinematic minimalism since Daniel Day Lewis unbuttoned Michelle Pfieffer's glove in "The Age of Innocence." (Credit here also goes to Isobel Waller-Bridge's vibrant score.) Rounding out the ensemble are an A Team of veteran and newcomer scene stealers — "The Crown's" Josh O'Connor is sublime as the arrogant Mr. Elton, a guy who, like Emma, has to learn to temper his unearned overconfidence.

Emma is one of the most complex characters in all of Austen's six completed novels. Hers is a story of becoming an adult in the world, and in that way, her journey never grows old. If she was effortlessly modern in "Clueless" and again in the 2013 web series "Emma Approved," she seems even moreso today — it's easy to imagine Emma as a rich kid Instagram influencer, doling out facile life hacks. As evidence, merely look to the plot's pivotal moment, when Emma cavalierly cuts down Miss Bates (Miranda Hart), the talkative neighbor who's been working the girl's last good nerve the whole story. It's easy to see Emma's 19th century zinger today in the pyrrhic victory of a salty tweet, a public dismissal of an older woman whose great crime is being insufficiently amusing to the popular girl. It's a timelessly devastating scene, one that exposes the Regina George within Miss Woodhouse. That's why "Emma." is such an exceedingly relevant coming-of-age lesson: it's a blunt reminder that money and beauty and cleverness don't make you good. But the beauty of the story, so ebulliently retold here, is that Emma gets to learn that. She shows that maturity means loving unconditionally, becoming "faultless in spite of all her faults," and staying humble while still incredibly fashion forward. Could a heroine like that ever fail to be captivating? As if.

"Emma." opens in New York and Los Angeles on Feb. 21, and nationwide on March 6.