Even though union members aren't endorsing a specific Democrat, they are eager to drive turnout and defeat Trump 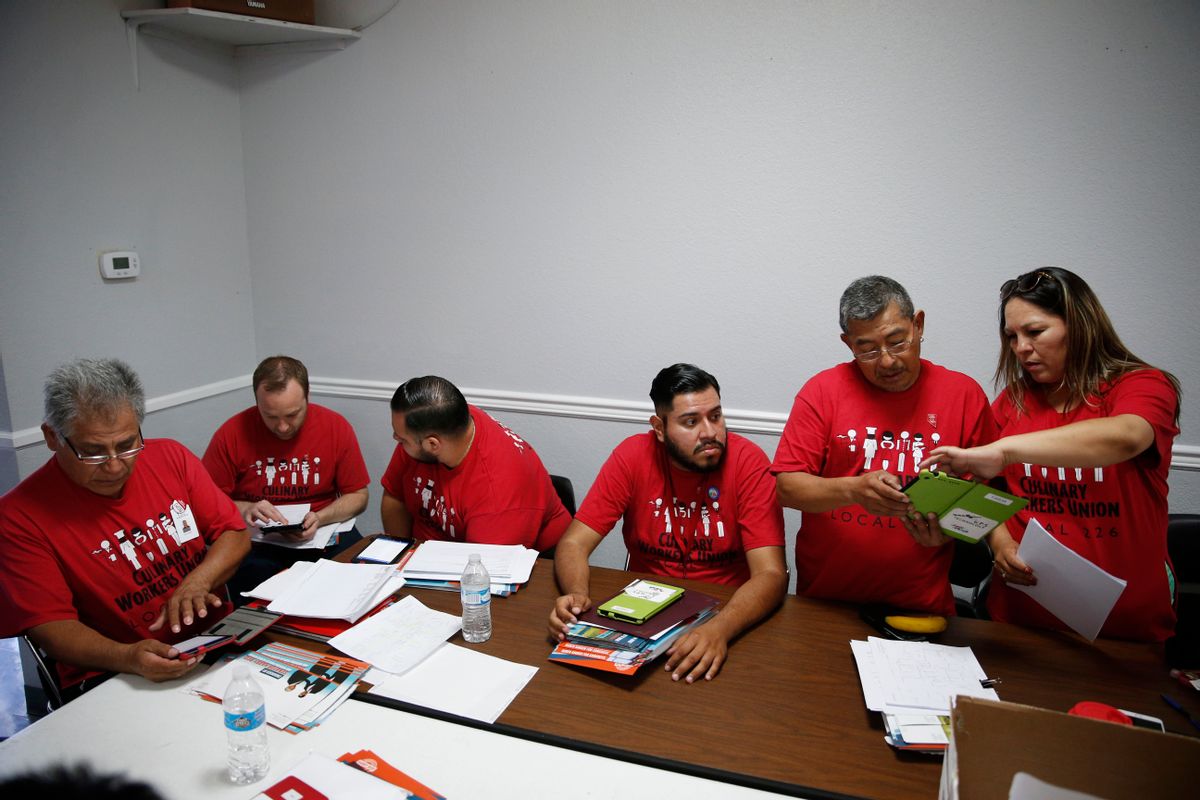 In this June 13, 2016 photo, members of Culinary Union Local 226 meet at their union hall in Las Vegas to prepare to canvass for Ruben Kihuen, a Hispanic candidate for congress. Half of the union's predominantly-immigrant members are Hispanic, and it has harnessed Sin City's housekeepers, cooks and janitors and turned them into an electoral powerhouse. (AP Photo/John Locher) (AP)
--

LAS VEGAS — Democratic presidential candidates had one last chance to woo Nevadans at this week's Democratic debate before the state's caucuses take place on Saturday. While much of the debate covered focused on the theatrical takedown of former New York City Mayor Mike Bloomberg, members of the state's Culinary Union were surprised by the attention that their organization got on stage.

Morgan was one of a dozen Culinary Union members phone banking on Thursday evening at its Las Vegas headquarters. Members sat in grey office cubicles calling other members to remind them to vote in Saturday's caucuses, provided they hadn't already. Behind Morgan hung a red button on the wall that read "union thug." Donning a Tommy Hilfiger polo and smart-looking blue-framed glasses, Morgan made his way down the list of members to call, dialing numbers on a Cisco office phone. He has been a member of the union for six years, and works as a bellman at a downtown casino.

Early voting in Nevada began last Saturday and ended on Tuesday, though the official event is on Saturday, February 22. Nevada is the third state to vote in the 2020 Democratic presidential primary. As the "first in the West" caucus, Democratic candidates see Nevada's caucus as a chance to get a better understanding of their appeal in a more diverse state than Iowa or New Hampshire. The union's membership is notably diverse: 54 percent Latinx, 19 percent white, 15 percent Asian, 10 percent Black, and less than 1 percent Indigenous peoples. More than half of union members are women.

The fact that the 60,000-member strong Culinary Union got so much air time during Wednesday's Democratic debate certainly has something to do with its political clout, but also relates to the union's stance on healthcare. Last week, the union — which represents Nevada workers in the hospitality industry, including guest room attendants, cocktail and food servers, cooks, bartenders, laundry and kitchen workers — announced it would not endorse a candidate for the primary. Instead, the union endorsed three of their goals, one of which included protecting their in-house healthcare — along with immigration reform, and the right to have a single job be enough to subsist on.

While the union is supportive of the basic idea of Medicare For All, it doesn't support plans like those proposed by Sen. Bernie Sanders of Vermont or Sen. Elizabeth Warren's of Massachusetts. Both of theirs, which resemble single-payer plans akin to those of many countries with universal healthcare, would replace the union's healthcare, they argue. The Culinary Union wants the option to keep the healthcare they bargained for years ago.

Despite the union's official endorsement of "goals" rather than a candidate, I asked if there were murmurs or sly endorsements of any specific candidate or candidates that arose during the phone bank calls. Morgan said no, adding that he expects there to be a big turnout from union members, though most of the people he spoke to say they have already voted or will be at a caucus on Saturday.

The goal, then, is turnout of union members to the caucuses — and ultimately the November election.

"I'm just encouraging voters to go out and participate, and I think that's most important," Morgan said. "We want them to vote Democratic, and to beat Trump."

Diagonal to Morgan sat Alber Mora, 42, who was making calls to Spanish-speaking members. Mora, who works in the grievances department and has been in the Culinary Union for 10 years, agreed that getting Trump out was the most important goal. Trump's "inhuman" policies are part of what motivated him to get politically active this year. Mora has lived in Las Vegas for ten years, but is originally from Cuba. Mora said the conversations he's had with members during phone banking have been indicative of excellent turnout.

"Many of them say yes they will go to the caucuses, most of them on my list say they will caucus," Mora said.

Notably, in the 2016 presidential election, voter turnout in Nevada was lower than it was in the 2012 election.

2016 entrance polls from CNN found that Latinos made up 19 percent of the Democratic electorate in Nevada, four percentage points higher than 2008. Yet which candidate (Clinton or Sanders) won among Latino voters in the 2016 primary was disputed. According to the FiveThirtyEight primary forecast for the 2020 primary, Sanders currently has an edge with Latino voters in Nevada.

Another member phone banking, Diane Woolman, 68, who has been with the Culinary Union for 9 years, said this year is certainly unusual. In the 2016 Nevada Democratic Caucus, the union remained on the sidelines — though in the actual 2016 presidential election, the union recommended voters to cast a ballot for Hillary Clinton.

"It's different for our members because they basically have to make decisions for themselves for this election," Woolman said. "They know our stance on what we need to protect as far as our union goes and what's important to us because we fought for it for years and years, so they will make their own decision which is a first for them."

When asked what issues are important to Woolman as a voter, she said healthcare. "We will fight to keep it because we fought to get it in the first place," she said.

Woolman said in terms of members not voting, the union works with the members' employers to make sure workers won't be penalized for caucusing during work.

"They get paid, they give them the time off to do it," she added.