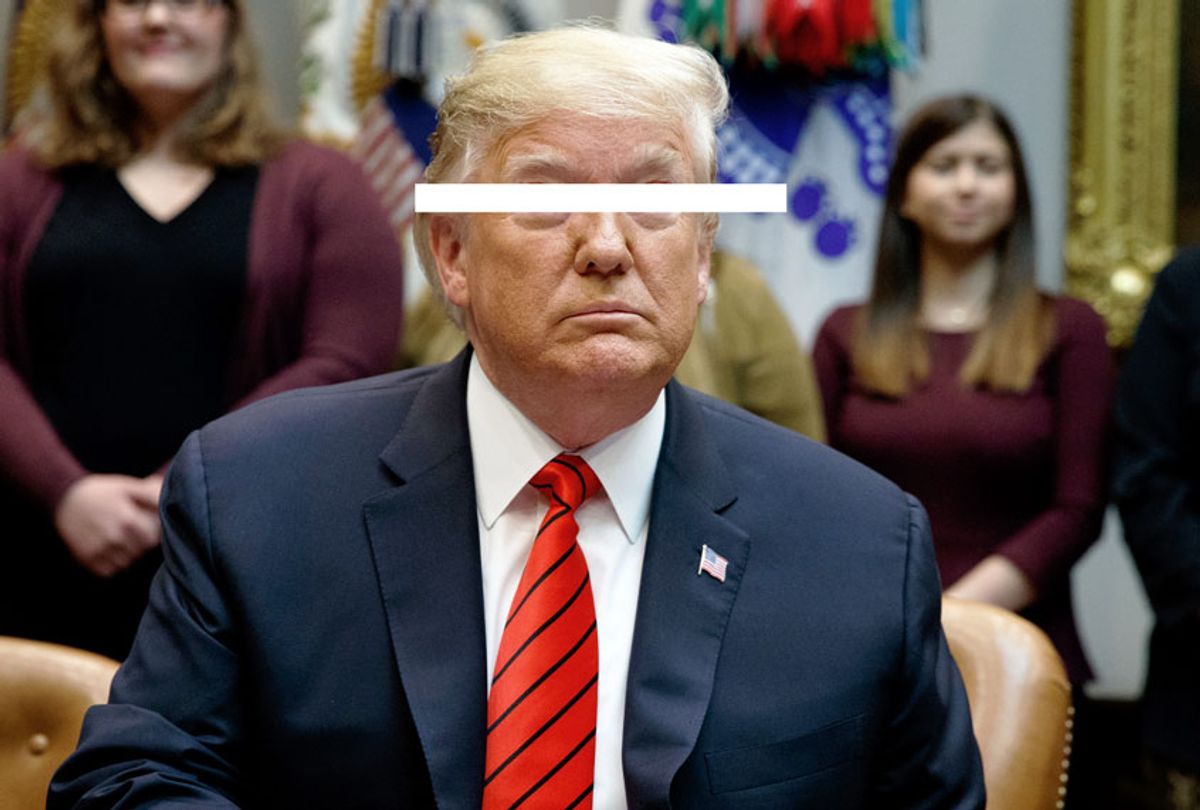 Donald Trump with a white bar over his eyes, denoting the wealthy upper class in "Parasite" (AP Photo/Salon)
--

President Donald Trump told a rally in Colorado on Thursday that he does not think "Parasite" should have won the Academy Award for Best Motion Picture because it is a South Korean film.

"How bad were the Academy Awards this year, did you see? 'And the winner is . . .  a movie from South Korea,'" Trump told the audience at his reelection rally in Colorado Springs. "What the hell was that all about? We've got enough problems with South Korea with trade, on top of it they give them the best movie of the year?"

"Parasite" was directed by Bong Joon-ho and tells the story of the impoverished Kim family, who infiltrates the house of the super-rich Park family by taking on various jobs and scheming to eventually elevate their own living situation. Because the film is a black comedy thriller, a number of unexpected twists challenge the Kim family's plans. The movie was nominated for six Academy Awards and won four including Best Picture, Best Director, Best Original Screenplay and Best International Feature Film.

Neon, the film distributor behind "Parasite," swiped back at the president by tweeting that his outrage was "understandable, he can't read." The film is subtitled for non-Korean speakers, and its popularity has created a dialogue about how Americans notably have resisted foreign films and having to read subtitles. After "Parasite" won the Golden Globe award for best foreign language film, Bong noted how embracing subtitles can open up one's world: "Once you overcome the one-inch tall barrier of subtitles, you will be introduced to so many more amazing films."

The Democratic National Committee also piled on Trump, tweeting that "'Parasite' is a foreign movie about how oblivious the ultra-rich are about the struggles of the working class, and it requires two hours of reading subtitles. Of course Trump hates it." The film's skewering of class can even be seen in its movie poster, in which the wealthy, entitled Parks can be seen with white bars over their eyes, while the Kim family members have black bars over their eyes.

The film's upset victory at the Oscars was widely hailed as a significant moment, both because it was the first foreign-language film to win the Best Picture Oscar and because the movie itself was an alternatingly scathing, poignant and humorous satire about economic class structures.

"For South Koreans, the four wins of 'Parasite' at the Academy Awards are an incomparable and immeasurable cultural success," Wancy Young Cho, a writer whose work has appeared in Salon, wrote for NBC News earlier this month. "For Korean Americans, they are also a point of pride and a moment to examine ourselves with the same joy with which Bong looked at his very first Oscar. For the Korean diaspora, we all feel seen."

Salon's Melanie McFarland reacted to the victory by writing that "in addition to 'Parasite' being a parable about wealthy and social standing, it's also a story about the power of pretense." She later added that the movie is "a gorgeous, shocking, thrilling work, one that swerves and glides the audience through developments that would border on the ridiculous if we didn't know what we know about the blithe arrogance and ignorance about the super-rich."

In Trump's tirade against "Parasite," he added that he would prefer it if movies like "Gone With the Wind" won more Oscars.

"Can we get like 'Gone With the Wind' back, please? 'Sunset Boulevard,' so many great movies," Trump told the crowd, citing movies from 70-80 years ago. It should be noted that "Gone With the Wind," which won 10 Academy Awards in 1940, is widely regarded as a racist movie because of its glorification of the Confederacy, refusal to showcase the horrors of slavery and stereotypical characterizations of African Americans.

Not content in his pop culture rant, Trump also took a swipe at Brad Pitt, who upon winning the Best Supporting Actor in a Leading Role Oscar joked that he had been given more time "than the Senate gave John Bolton," a reference to the former national security adviser who was not permitted to testify in Trump's impeachment trial. The president told the crowd that he was "never a big fan" of Pitt and called him "a little wise guy."

Watch the full video of Trump speaking his mind from BuzzFeed News: