The Auschwitz Memorial called out the human chess game scene, claiming that it could fuel Holocaust denial 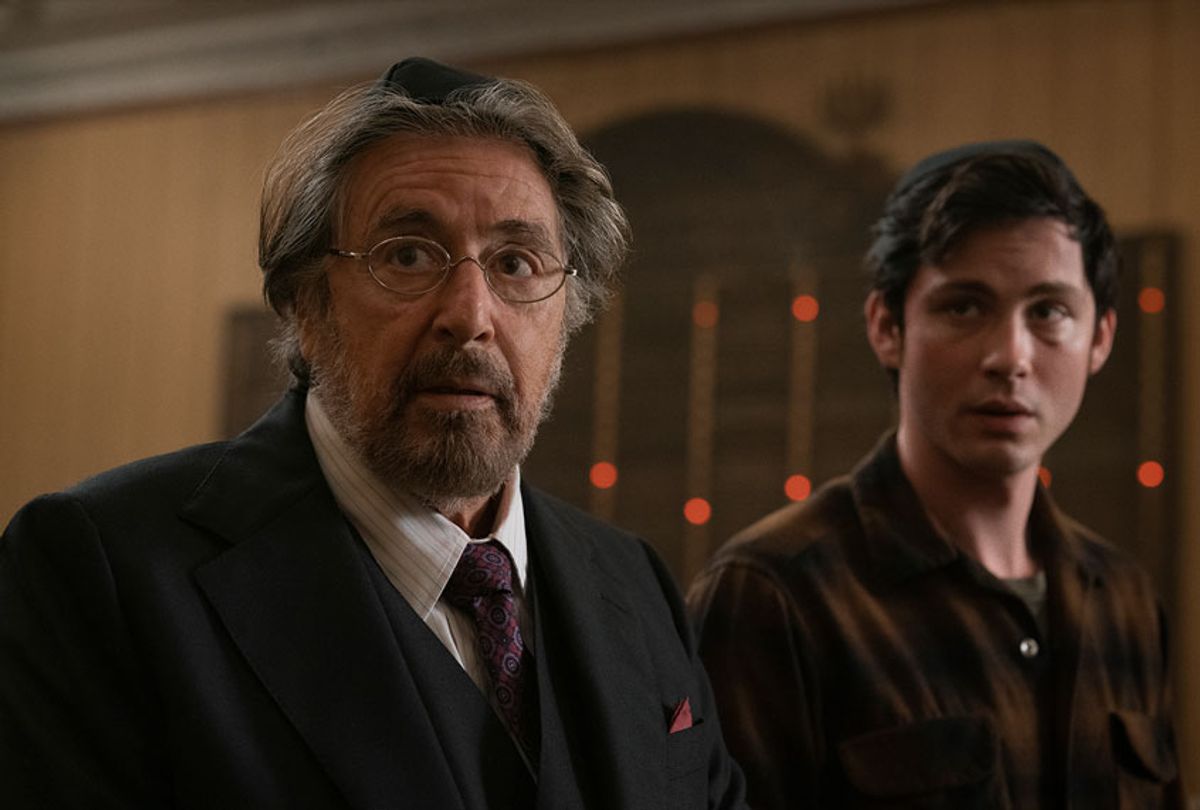 David Weil, the creator of the Amazon Prime series "Hunters" – a show set in the 1970s about Nazi-hunting vigilantes in America – had to defend his show over the weekend after the Auschwitz Memorial criticized its fictionalized history as welcoming "future deniers."  Weil responded that his series is "an emotional and symbolic reality that allows us to better understand the experiences" of the Holocaust.

"Hunters" stars Al Pacino, Logan Lerman, Carol Kane, Tiffany Boone, Josh Radnor and Louis Ozawa Changchien as Nazi hunters as New Yorkers in the 1970s who attempt to find and exact revenge upon Nazis who have infiltrated the United States. Jerrika Hinton co-stars as an FBI agent who suspects a conspiracy behind the deaths of the various Nazis and wishes to bring the perpetrators to justice.

There has been considerable controversy over a fabricated element of concentration camp life in the series that involves a human-sized chess game. Seen in the first episode and the title credits, the game involves a Jewish chess master who is forced to play chess using his fellow prisoners as stand-ins for actual pieces. When a chess piece is taken off the "board," the corresponding prisoner is killed. There is no evidence that anything like this happened during the Holocaust.

"Auschwitz was full of horrible pain & suffering documented in the accounts of survivors," the Auschwitz Memorial tweeted on Sunday. "Inventing a fake game of human chess for @huntersonprime is not only dangerous foolishness & caricature. It also welcomes future deniers. We honor the victims by preserving factual accuracy."

In a statement on Sunday, Weil recalled visiting Auschwitz years earlier and seeing the barracks where his grandmother lived as a prisoner at the time. He argued that the series was intended to honor Holocaust victims and survivors, but that his series "is not documentary" and "never purported to be." Despite being a work of fiction, Weil argued that the series was careful to respect victims through steps such as not giving their characters tattoo numbers that were given to real-life Holocaust prisoners.

He also defended the chess scene, arguing that it was put in the series for "showcasing the most extreme – and representationally truthful – sadism and violence that the Nazis perpetrated against the Jews and other victims." Weil claimed that he felt this was more respectful than to depict "specific, real acts of trauma."

Years ago I visited Auschwitz and I saw the gates my grandmother was forced to enter decades earlier and the barracks she was forced to live in as a prisoner. I saw vestiges of the nightmarish world she had survived. It was an experience that forever altered the course of my life. It was the moment consecrated in time and memory that I sought to make good on doing my part – however big or however small – to ensure the promise of "Never Again." I believed then – as I do now – that I had a responsibility as the grandson of Holocaust survivors to keep their stories alive.

While Hunters is a dramatic narrative series, with largely fictional characters, it is inspired by true events. But it is not documentary. And it was never purported to be. In creating this series it was most important for me to consider what I believe to be the ultimate question and challenge of telling a story about the Holocaust: how do I do so without borrowing from a real person's specific life or experience?

It was for this reason that I made the decision that all of the concentration camp prisoners (and survivors) in the series would be given tattoos above the number 202,499. 202,499 is the highest recorded number given to a prisoner at Auschwitz. I didn't want one of our characters to have the number of a real victim or a real survivor, as I did not want to misrepresent a real person or borrow from a specific moment in an actual person's life. That was the responsibility that weighed on me every night and every morning for years, while writing, producing, editing this show. It is the thing I go to sleep thinking about and the thing I wake up working to honor.

In speaking to the "chess match" scene specifically… this is a fictionalized event. Why did I feel this scene was important to script and place in series? To most powerfully counteract the revisionist narrative that whitewashes Nazi perpetration, by showcasing the most extreme – and representationally truthful – sadism and violence that the Nazis perpetrated against the Jews and other victims. And why did I feel the need to create a fictional event when there were so many real horrors that existed? After all, it is true that Nazis perpetrated widespread and extreme acts of sadism and torture – and even incidents of cruel "games" – against their victims. I simply did not want to depict those specific, real acts of trauma.

If the larger philosophical question is can we ever tell stories about the Holocaust that are not documentary, I believe we can and should. HUNTERS, like a myriad of acclaimed films on the subject, does not always adhere to literal truth in its pursuit of capturing the representational truth of the Holocaust. My decision to fictionalize was made in awareness of this debate, and this show takes the point of view that symbolic representations provide individuals access to an emotional and symbolic reality that allows us to better understand the experiences of the Shoah and provide it with meaning that can address our urgent present.

I am forever grateful to the Auschwitz Memorial for all of the important and vital work that they do, for keeping the memory of victims and survivors like my grandmother, Sara Weil, alive.  I believe we are very much on the same side and working toward the same goals. And I hope we can continue a dialogue on how to achieve those goals.

Before the Auschwitz Memorial controversy, star Logan Lerman – who plays Jonah Heidelbaum – also discussed the comic book tone of the series, which has been another point of contention for its critics. Lerman, who is returning to TV for the first time since starring in The WB's "Jack and Bobby," told The Hollywood Reporter, "This world is heightened all over the place tonally but at the center of it, it has a very real question about how to effectively combat evil or a fascist uprising. Can you do that and keep your morals and ethics in tact? Is it possible? Or would you just lose the battle?"

In the same interview, Weil said, "You'll see Jonah's evolution through this world that begins in this very graphic novel kind of place. But so too when I grew up and began to learn more and could understand more about the depth of degrees of the horror that [my grandmother] experienced, those colors began to desaturate and I began to see in stark reality what she went through."

In Salon's review of the series, Melanie McFarland wrote, "The premise has an appeal, especially since we've passed that point of debating whether it's OK to punch a Nazi or denying that white supremacy is a serious threat to national security, not just in America but around the globe. A white supremacist has the president's ear and is shaping our viciously cruel immigration policy so yeah, people have feelings about that."

McFarland's comment refers to White House senior adviser Stephen Miller, who has pushed for draconian anti-immigrant policies and promoted pro-white nationalist literature to the right-wing site Breitbart prior to his work for the administration. In addition to having Miller as an adviser, Trump has been criticized for rhetoric that seemed sympathetic to Nazism, such as when he said there were "bad dudes" on both sides after alt right protesters clashed with anti-fascists in Charlottesville in 2017.

The Holocaust, or Shoah, was the World War II genocide of European Jews. Roughly 6 million Jews are believed to have died during the Holocaust, or roughly two-thirds of the total Jewish population in Europe from the 1940s. Approximately 11 million other people were murdered by the Nazis during the Holocaust era including the Roma, homosexual men, ethnic Poles, Soviet civilians and prisoners of war and political and religious dissidents.

"Hunters" is currently available to stream on Amazon.