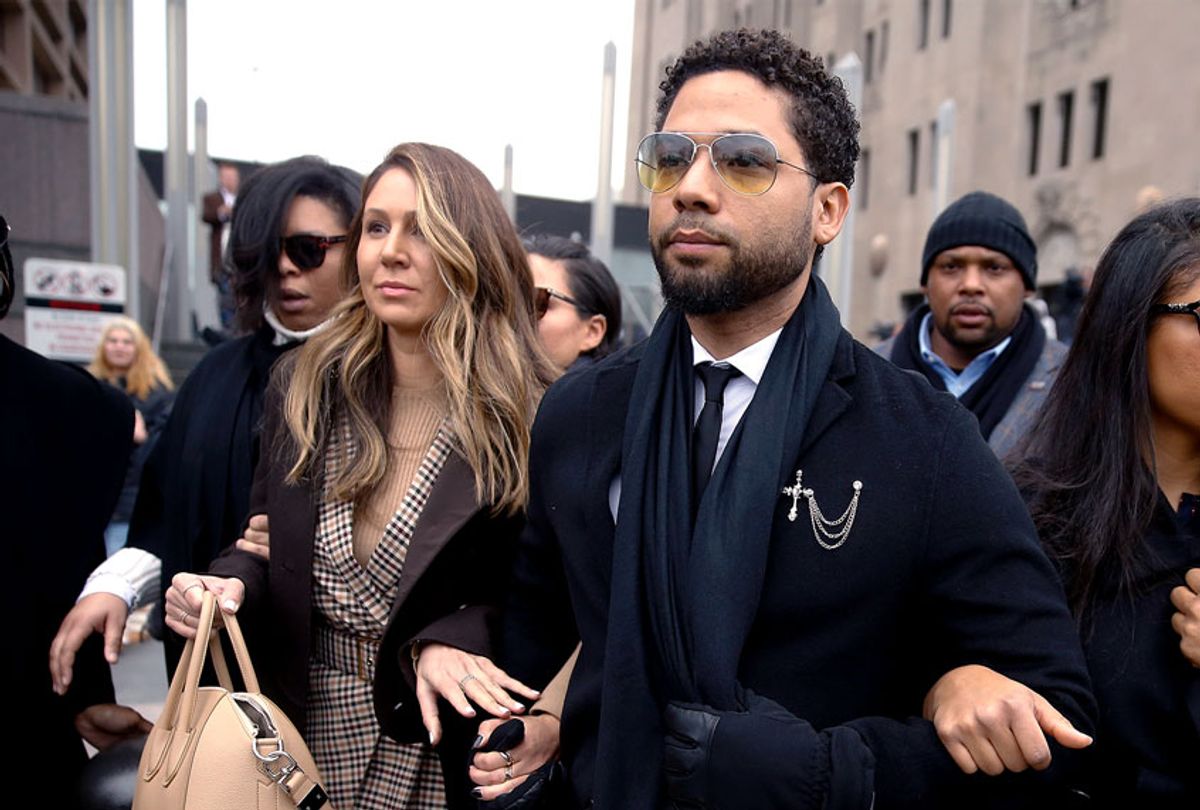 Actor Jussie Smollett leaves Leighton Criminal Courthouse on February 24, 2020 in Chicago, Illinois. Smollett pleaded not guilty to charges of disorderly conduct in a new criminal case connected to allegations he staged a hate crime on himself. (Nuccio DiNuzzo/Getty Images)
--

Former "Empire" star Jussie Smollett pleaded with the Illinois Supreme Court on Monday to kill six criminal charges made against him earlier this month by special prosecutor Dan Webb. All of the new charges are related to his allegedly false claim of having been victimized in a hate crime last year. Smollett also pleaded not guilty to the crimes themselves.

Smollett's attorneys filed a motion calling for a stay in the prosecution and the dismissal of special prosecutor Dan Webb, arguing that Webb's appointment had been illegitimate.

"The circumstances surrounding the initial case in 2019 did not reach the legal level warranting the appointment of a special prosecutor," Smollett lawyers William J. Quinlan and Tina Glandian stated in the motion's paperwork, according to Deadline. "Under the terms of the law, in order to appoint a special prosecutor, the office (of Cook County State's Attorney Kim Foxx) had to file a former recusal with the court, and that didn't occur here."

Smollett's attorneys also argued that refiling the original charges against their client violates his right to not be charged twice with the same crime, known as double jeopardy, according to the Associated Press. Prosecutors countered that Smollett isn't protected because he was never prosecuted for the original charges.

Judge James Linn, the Cook County jurist presiding over the case, declined to delay the proceedings and set a $20,000 personal recognizance bond for Smollett. The actor's next court date is March 18.

Earlier this month Webb convinced a Chicago grand jury to return a six-count indictment against Smollett for allegedly making four separate false reports about hate crimes to Chicago Police Department officers. He is accused of paying two Nigerian brothers $3,500 last January to stage a hate crime against him. The supposed attack involved Smollett being victimized by racist and homophobic slurs (Smollett is both African American and gay), beaten up, having bleach poured on him, and having a noose tied around his neck.

At the time of Webb's indictment, Smollett's attorney Tina Glandian said that it was an "attempt to re-prosecute Mr. Smollett one year later on the eve of the Cook County state's attorney election is clearly all about politics — not justice."

Although Smollett faced 16 disorderly conduct charges last year regarding the same alleged hate crime hoax, the charges were unexpectedly dropped in March. Chicago's police union demanded the resignation of Cook County State's Attorney Kimberly Foxx, voting "no confidence" in her leadership because she had initially seemed to recuse herself from the case only to backpedal later on. Foxx's initial recusal had been based on "potential questions of impartiality based upon familiarity with potential witnesses in the case," although her office later claimed the recusal had been "colloquial" rather than legal.

The resulting uproar over Smollett seeming to get off without consequence led to Webb's appointment as special prosecutor in the case.

Linn, who will preside over Smollett's case, is a judge well known for not going easy on celebrities who appear before his courtroom. When Oprah Winfrey tried to parlay her status into getting off of jury duty in 2004, Linn famously said that "I'm not going to say that somebody is too important in our society to be a member of a jury. I have no concern at all that the stars of this trial are going to be the trial lawyers and the overriding personalities are going to be the lawyers and, to some extent, even the court."